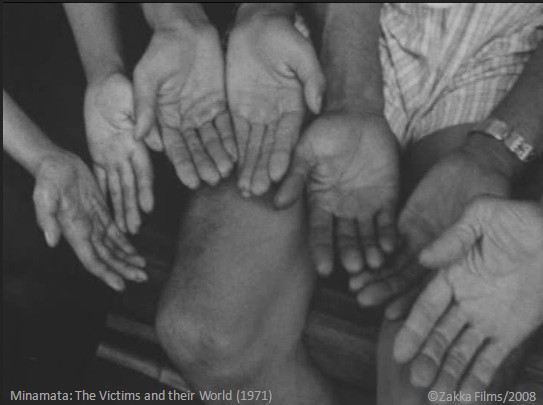 It is a sad irony that the Fukushima nuclear disaster should occur in the same year that Noriaki Tsuchimoto’s groundbreaking documentary Minamata: The Victims and Their World (水俣 患者さんとその世界/Minamata: Kanja-san to sono sekai, 1971) got its first release on DVD with English subtitles.  For the narrative of corporations and politicians putting financial gain ahead of risks to public health and safety is not a new one in Japan.  History is repeating itself yet again – only the players and the type of poison have changed.

Minamata: The Victims and Their World is the first in a series of documentaries that Tsuchimoto made documenting the plight of the victims of Minamata disease, their families, and their fight for redress.  Minamata disease takes its name from the city in Kumamoto prefecture where the disease was identified in 1956.  The disease is a neurological syndrome caused by severe mercury poisoning.  The local chemical factory run by the Chisso Corporation polluted Minamata Bay and the Shiranui Sea with industrial waste water containing the highly poisonous chemical compound methylmercury between 1932 and 1968.

Noriaki Tshuchimoto’s documentary opens with a series of title cards that quietly lay out the bare facts of how the people of Minamata came to be poisoned by mercury.  The documentary then shifts its focus from the facts and figures to the stories of the victims and their families.  Fishermen talk of how they knew something was wrong when fish began behaving strangely in the sea and local cats that ate the fish started going insane.  Family members share the agonies endured by their loved ones before they died of the disease.  Doctors, teachers, and physiotherapists compare and contrast the illness to other known conditions such as cerebral palsy.  The most chilling legacy is the stories of the children with congenital Minamata disease, who were poisoned while in the womb.  Their physical and mental challenges are so great that there is little hope for rehabilitation.

The interviews are paced throughout the film like the ebb and flow of the tide.  Emotionally harrowing personal testimonies are book-ended by quiet sequences that give the spectator a moment to pause and reflect.  These quiet moments are often montages that capture the natural beauty of the landscape and the sea of the region.  With each new story of pain and loss, the tension slowly builds until the film’s dramatic climax in which the victims and their families go to the Chisso biannual shareholders meeting to confront the company president and demand that he publicly take responsibility for his company’s crimes against humanity and the environment. 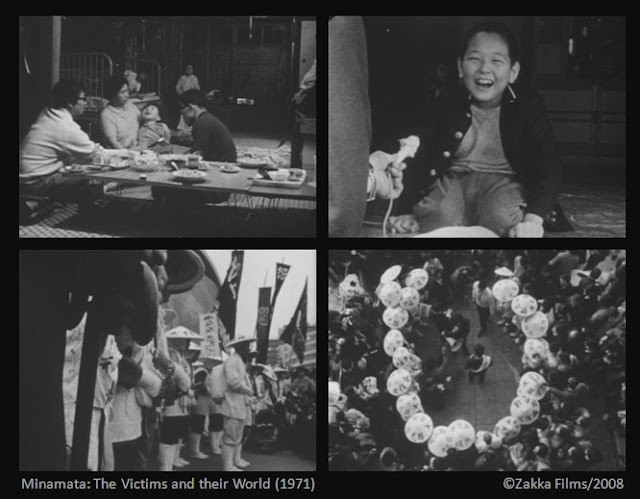 The mainstream documentary style in Japan – even today – is one in which an authoritative, voice-of-god narrator tells the spectator how to interpret the images they are being shown.  As authority figures had betrayed the people of Minamata, Tsuchimoto wisely decided to foreground the voices and faces of the victims themselves in this documentary.  According to Sachiko Mizuno in the supplementary material for the DVD release, the victims had resisted the efforts of television documentary crew because of their deeply held suspicions about the media (p.6) It becomes apparent while watching the documentary that Tsuchimoto has won over the people with his friendly, sincere manner.  He occasionally appears in the film, usually partly or wholly off-frame, holding a microphone in his hand and gently coaxing his subjects to talk to him.

The film is particularly interesting for its use of sound.  The lack of synch between the image and the soundtrack is initially distracting.  Sound was a big problem for low budget documentary filmmakers of the day as it was recorded separately from the image.  The asynchronous sound provided Tsuchimoto with the opportunity to play with the soundtrack in innovative ways.  As his subjects tell us their stories, we are treated to montages of images of the dead, their families, and their homes.  The asynchronicity forces us to listen more closely to the words and to study the face of the speaker more carefully.  Although each family has their own individual tale of suffering and loss to tell, taken together one gets the sense of a community of simple, hardworking people who have been unjustly made into outcasts in the town where their families have lived and fished for generations.  The story of their fight for justice is not only of historical import, but their determination against all odds is also inspiring for the many people who are today suffering at the hands of an unfeeling bureaucracy in the southernmost prefecture of Tohoku.


Minamata: The Victims and Their World is one of four documentaries by Noriaki Tsuchimoto (土本典昭, 1928-2008) released by Zakka Films on DVD this year. It has optional English language subtitles and is accompanied by an essay by Abé Mark Nornes (U of Michigan) and film commentaries by Sachiko Mizuno (Kanazawa U).   Individuals can purchase this DVD for a reasonable price from independent film distributor Film Baby. Institutions should contact Zakka Films directly for purchasing information