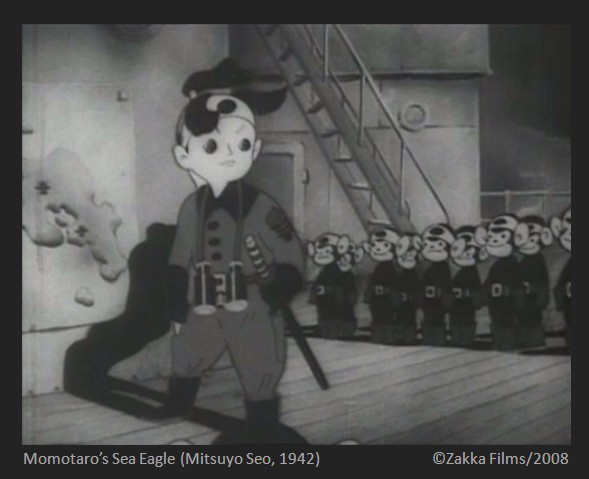 World War II inspired many governments around the world to sponsor animated propaganda to rally support on the home front. Some, like the films of Norman McLaren in Canada, were aimed at encouraging people to support the war financially – see V for Victory (1941), Five for Four (1942) , and Dollar Dance, 1943 (NFB Overview). Disturbingly in the United States (see Ducktators), Japan, and Germany (see Der Störenfried), propagandists decided to target children for their campaigns by using characters from popular folk tales and movies.
In Japan, the legend of Momotaro, the Peach Boy, was commandeered by propagandists as a patriotic hero. In the original tale, Momotaro was found by an elderly couple floating down the river in a peach. When he grew up, he became unusually strong. One day, Momotaro decides to Demon Island in order to defeat the demons that are terrorizing the people there and the elderly woman who adopted him gives him millet dumplings to take with him. Along the way, he encounters a dog, a monkey, and a pheasant and he gives them millet dumplings so that they will join him on his mission. They defeat the demons and return home with wonderful treasures.

Momotaro’s Sea Eagle (桃太郎の海鷲/Momotarō no umiwashi, 1942) reframes this story in a manner designed to encourage people to celebrate the December 1941 attack on Pearl Harbor as a victory against evil forces. Unlike the original tale where Momotaro actually engages in battle with the dog, monkey, and pheasant, in Momotaro’s Sea Eagle, Momotaro assumes the role of a military leader who orders his troops of dogs, monkeys, and pheasants into battle while he follows the action from the battleship. “I, your captain,” Momotaro pronounces, “will await your return.” Momotaro towers above the animals who are quite childlike in both appearance and behaviour.

The film sets up a number of gags to endear young audiences on the side of the Japanese forces. The ground crew are rabbits who use their floppy ears to make signals. On one of the planes, a dog and a monkey play with building blocks that are in danger of collapsing. The Japanese, the film suggests, are on the side of all that is good and natural in the world. At one point, they even befriend a baby sea eagle and his parent in a bizarre sequence that takes place on the wing of one of the aircraft – as if there would be no wind while in flight!

The conceit is that Hawaii is Demon Island and that the inhabitants there are the demons of legend. When the attack commences, we are disturbingly shown events from the point of view of the people on the ground. The Americans are depicted in human, not animal form, but the horror of the event is subverted into slapstick comedy. The central American character resembles Bluto from the popular Fleischer Studio’s Popeye series. These films were well-known and loved by Japanese children in the 1930s and the character would have been immediately recognizable as Popeye’s nemesis. In the unlikely circumstance that a child did not recognize him as Bluto, he is clearly demarcated as “bad” because he has demon horns and a tail and is associated with heavy drinking.

Apart from the fact that it is disquieting to see an event in which 2,402 Americans were killed and more than a thousand wounded depicted as if it were an extended slapstick comedy routine, there are a number of historical inaccuracies promoted by the film. Two of the most obvious are the suggestion that some Japanese troops were on the group and set airplanes on fire by hand (a chain of monkeys, like the S-shaped Barrel of Monkeys toy game, descends from an airplane window to do this with matches) and worse, the suggestion that all the Japanese returned home safely. In actuality 55 Japanese airmen and 9 submariners were killed in action that day.

A great deal of the film is taken up with showing off Japanese military might. It takes many minutes for action to get underway because the opening scenes are so concerned with instilling a sense of awe and pride in the technology of war.  The film was billed at the time as being Japan’s first feature-length animation – which was a bit of a stretch considering that the film is only 37 minutes long. The true recipient of this title was the sequel to this film Momotaro’s Divine Sea Warriors (Mitsuyo Seo, 1944).

Momotaro’s Sea Eagle is the centrepiece of Zakka Films’ DVD The Roots of Japanese Anime which also includes a bonus extra of posters from the time advertising the film as “A thrilling, unparalleled naval battle that makes the red and blue demons tremble!” The posters also suggest that Momotaro’s army will not only be fighting Bluto but also Popeye and Betty Boop, declaring: “Roosevelt and the American gangster Popeye are no match. They face Momotaro’s troops and end up all wet.” Popeye and Betty Boop do not appear in the film itself.  Most disturbingly, the ads proclaim that the film is not only sponsored by the Naval Ministry but recommended by the Ministry of Education “as a living textbook for your children.” From today’s perspective it is certainly a valuable film to watch in order to teach about how propaganda is produced and disseminated.

Apart from the troubling nature of the subject matter, the film is historically significant in terms of demonstrating how sophisticated cel animation had become in Japan by the 1940s.  It is important to note that the politics of the film do not reflect that of the director, Mitsuyo Seo (瀬尾 光世, 1911-2011), who actually had left-leaning political sympathies and was pressured into making propaganda films.  Tragically, due to historical forces beyond his control, Seo was saddled with these beautifully animated but deeply propagandistic films as his legacy to animation history.  Seo does at least have the distinction of being the first Japanese animator to use multiplane camera and his work is said to have influenced Osamu Tezuka.  It was also interesting to see puppet animation pioneer Tadahito Mochinaga listed in the credits for this film.

The Zakka Films DVD includes informative historical information by Jasper Sharp (Midnight Eye) and Aaron Gerow (Yale U) which help contextualize the film. The Roots of Japanese Anime has optional English subtitles and comes with an informative booklet featuring an historical overview by  and film notes by  Individuals can purchase this DVD for a reasonable price from independent film distributor Film Baby. Institutions should contact Zakka Films directly for purchasing information