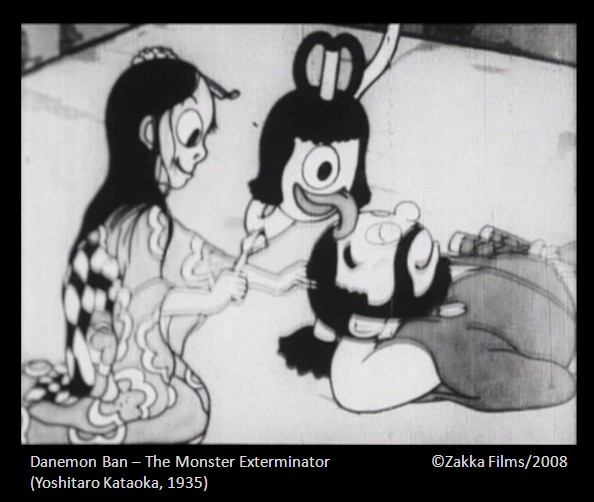 One of the reasons that animation really took off in Japan is the wealth of Japanese folklore that lends itself well to the medium. While Japanese ghost stories adapt well to live action movies, animation is the ideal medium for bringing to life the monsters and shapeshifting animals of Japanese legend.
The animated short Danemon Ban – The Monster Exterminator (塙団右衛門化物退治の巻/Ban Danemon – Shojoji no tanuki-bayashi, 1935) brings together both folklore and historical legends. The central character, Danemon Ban (塙 団右衛門), is an historical figure from the late Sengoku / early Edo period. Born Naoyuki Ban (塙 直之, 1567-1615). He was a samurai general legendary for his enormous strength and leadership qualities. Danemon Ban – The Monster Exterminator has fun with the legend of Danemon Ban using his rumoured love of drinking and fighting to set up amusing gags. He strides confidently onto the screen on his extra-tall geta (wooden sandals) and pushes through a gaggle of men to read a sign posted at the foot of an oversized, pagoda-like castle and reads that there is a reward of 1000 ryo for the man who defeats the monster in the haunted mansion.
In order to read the sign this legend of old amusingly squints and pulls out some spectacles because it turns out that Ban is short sighted. Then he announces that he will defeat the monster not in order to be a hero, but to pay for his sake. The gags continue inside the haunted castle. Danemon Ban discovers a beautiful woman with a Betty Boop-esque face dressed in a kimono and bound with rope. When he tries to free her, she reveals herself to be a monster and her magic causes him to fall asleep. A one-eyed serpent monster descends from the ceiling and licks his head so that the woman can shave him bald. A humiliating ritual, which I suspect is a reference to the tradition of a samurai’s hair being shorn off in defeat. 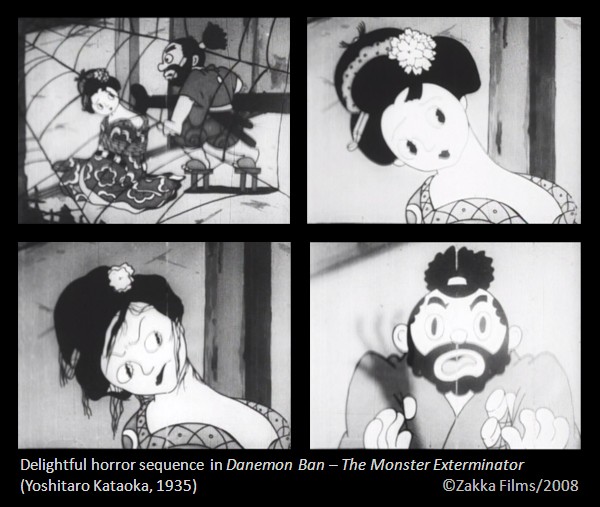 In the next scene it is revealed that these two monsters haunting the mansion are actually tanuki (raccoon dogs) in disguise. In Japanese legends, tanuki are shapeshifters who are notorious for causing trouble in the human world. When Danemon Ban wakes, they transform themselves into human beings, with the head tanuki turning himself into the popular one-armed ronin Sazen Tange announcing “I am the tanuki movie star!” (read previous review of Chameko’s Day for more on Sazen Tange). Danemon Ban must defeat the tanuki in order to win the 1000 ryo reward.
Animated by Yoshitaro Kataoka (片岡芳太郎), Danemon Ban – Monster Exterminator was written by Kazumitsu Masuda and partly inspired by the song “Raccoon Dogs on a Moonlit Night” (Shojoji no tanuki-bayashi) by Ujo Nobushi and Shinpei Nakayama. Kataoka uses some wonderfully innovative techniques in this film. For example, when Danemon Ban approaches the mansion, he hears the woman crying for help and Kataoka animates her words as they travel to Ban’s ears. The way in which Ban’s horror at seeing the woman transform into a monster is depicted by using the shadow of her hand over his shocked face and the vortex depicting his dizziness as the magic puts him to sleep reminded me of the special effect techniques that Alfred Hitchcock would use many years later in films like Spellbound (1945), Psycho (1960) and Vertigo (1958). Simple, but highly effective ways of visually depicting extreme emotional states.  I also really liked the overhead shots of Dan taking down circle after circle of disguised tanuki with his club.  In reminded me of a phenakistoscope.

There is a shorter benshi cut of Danemon Ban – Monster Exterminator extant and available on the Digital Meme Japanese Anime Classic Collection Box Set. The benshi performance on this version is done by  Midori Sawato. It is not as good as seeing her perform live – which I did at the First Benshi Performance that I ever attended back in 2006 – but it’s the next best thing.
The sound version of Danemon Ban – Monster Exterminator appears on the Zakka Films DVD The Roots of Japanese Anime: Until the End of WWII. Of the 8 works appearing on this DVD, Danemon Ban is in the worst condition. The years have not been kind to early Japanese animation and cinema – with the vast majority of films produced pre-WWII being either lost or existing only in fragmentary form. Despite the heavy scratching and flashing on this extant print of Danemon Ban, the beauty and originality of Kataoka and his animation team still shines through. We are indeed lucky that the efforts of Japanese archivists have at least managed to preserve this delightful film.
The Roots of Japanese Anime has optional English subtitles and comes with an informative booklet featuring an historical overview by Jasper Sharp (Midnight Eye) and film notes by Aaron Gerow (Yale U). Individuals can purchase this DVD for a reasonable price from independent film distributor Film Baby. Institutions should contact Zakka Films directly for purchasing information.
Catherine Munroe Hotes 2011