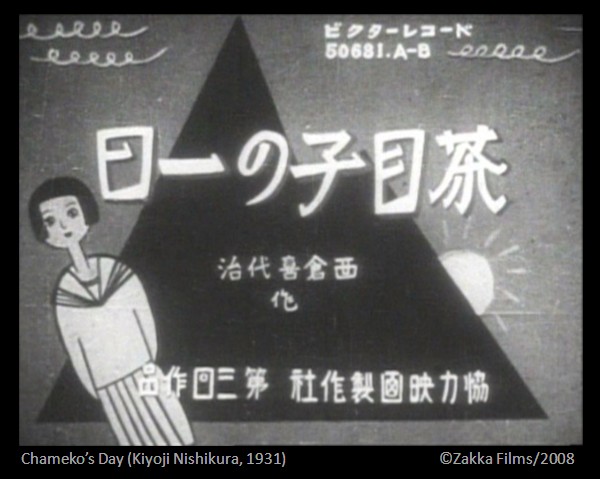 Chameko's Day is a popular Japanese children's song from the pre-war period.  Written by Kōka Sassa of the Asakusa Opera it was first recorded in 1919 with Tokiko Kimura playing the role of Chameko, Kikuyo Amano as her mother and Kiyoshi Itoh as her teacher and the benshi narrator. The song was rerecorded in 1929 with child star Hideko Hirai and Asakusa Opera performers Ruby Takai and Teiichi Futamua and became a big hit for Victor Records. This popular recording of the song inspired the unusual animated short Chameko’s Day (茶目子の一日/Chameko no ichinichi, 1931).

This is not a synchronous sound film but a silent film designed to be played synchronously with a phonograph record. This was a common type of animated short at the time. Other examples include Noburo Ofuji’s chiyogami cutout animations Song of Spring (1931) and Black Cat (Kuronyago, 1931) – the latter of which also features the voice of Hideko Hirai. Chameko’s Day is also a cutout film but directed by lesser known animator Kiyoshi Nishikura. This is believed to Nishikura’s only attempt at directing a film, although he actively worked as an animator and cinematographer for Kenzo Masaoka on films such as Sakura (1946) and Tora-chan, Abandoned Kitten (1947).

As the title suggests, the story follows a day in the life of a young girl named Chameko. The song begins by setting the scene with an ode to the morning followed by observations of urban daily life: the neighbour’s laundry hanging outside, an old lady who calls out “Natto! Natto!” as she sells her wares (natto = fermented soy beans). Chameko’s mother tells her to get up and she begins her daily routine: putting on her school uniform, brushing her teeth, washing her face, eating breakfast. She then braves the city streets to walk to school. At school, Chameko is taught math and reading. After school, she convinces her mother to take her out to the movies. They watch a newsreel about Kinue Hitomi (人見 絹枝, 1907-31), the first Japanese woman to win an Olympic medal, followed by a Tange Sazen movie. For a children’s animation, the film ends on a very surprising note with Tange Sazen’s sword chopping the heads off three men. “Let’s go again next Sunday!” sings Chameko.

Nishikura’s cutout animation seems choppy in comparison to the smoothness of other cutout animation of the time like Yasuji Murata’s The Monkey Masamune (1930) and Ofuji’s The Village Festival (1930). At one point, when Chameko bends over, her body divides in two revealing that she is a cutout. I am not sure if the lack of smoothness to the animation points to a lack of skill on the part of the animator, because it may well have been intentional on the part of Nishikura. He seems to be experimenting with many different styles in this film and some scenes may be deliberately choppy in style – to the point of surrealism at times. The transitions between scenes are expertly done, which adds to my hunch that the jerkiness was a stylistic choice.  Chameko gets dressed in a flash – which may have seemed like magic to children at the time. There is a fascinating sequence in which Chameko’s breakfast comes to life including a hilarious sequence in which her dishes and chopsticks and even the stinky natto dance.

This film contains the earliest example of product placement that I have seen in a Japanese animation. Chameko proclaims that she brushes her teeth with Lion Toothpaste every day. Lion – which continues to sell toothpaste and other products today – launched Japan’s first toothpaste in a tube in 1911 followed by a variety for children in 1913. The scene also features the Banzai Toothbrush which was designed by Lion in 1914 with the assistance of an institution known today as the Tokyo Dental College.

The film really does give us a glimpse of life in early 1930s Japan in terms of popular culture. In the cinema sequence at the end, actual newsreel footage of Kinue Hitomi (read about her here), is innovatively integrated  into the image with the cutouts acting as a frame to the live action footage. It is a rather poignant moment as Hitomi, who had won silver in the 800 meters at the 1928 Amsterdam Olympics, died prematurely of pneumonia in the same year in which the film was made.

The animated Tange Sazen (丹下 左膳) film that Chameko sees refers to the popular series directed by Daisuke Itō and starring Denjirō Ōkōchi in the lead role. Tange Sazen is nihilistic ronin who lost his right eye and arm due to an act of betrayal. This fictional character first appeared in a serial novel by Fubo Hayashi that ran in the Mainichi Shimbun from 1927-28 and was later adapted by several film studios into films - with the Daisuke Itō ones being the most successful. Although from today’s perspective ending a children’s film with decapitation seems pretty horrific, as most of the film is surreal with talking and singing breakfast foods, dishes, and utensils – it may well be that children of the day just saw it as a gag and laughed.  The fact that the director liked gags is suggested by my favourite moment in the film: in the traffic scene when Chameko is walking to school a daikon radish jumps about in the traffic and an image of Charlie Chaplin on the side of a truck comes to life in order to catch the daikon in his bowler hat.

Chameko's Day appears on the Zakka Films DVD The Roots of Japanese Anime.  It is in relatively good condition considering the age of the film.  The DVD has optional English subtitles and comes with an informative booklet featuring an  historical overview by Jasper Sharp (Midnight Eye) and film notes by Aaron Gerow (Yale U). Individuals can purchase this DVD for a reasonable price from independent film distributor Film Baby. Institutions should contact Zakka Films directly for purchasing information.