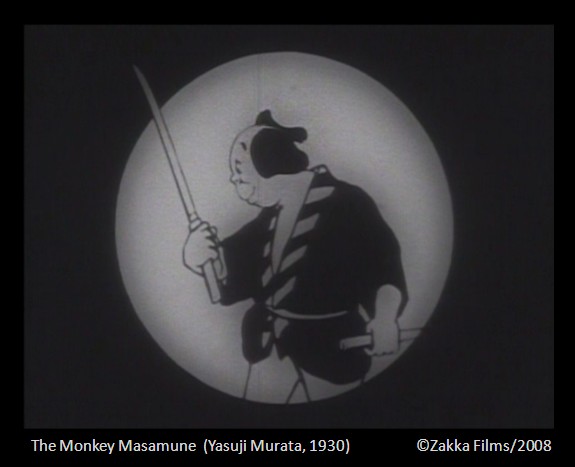 During the late Kamakura period, there lived a famous swordsmith known as Masamune whose renown as a swordsmith was so great that even long after his passing the term “Masamune” was used to describe any fine sword. Even today, the Masamune Prize is awarded to swordsmiths of outstanding skills in their craft. In Yasuji Murata’s cutout animation The Monkey Masamune (猿正宗/Saru masamune, 1930) a humble messenger is rewarded with the gift of a Masamune sword when he saves the life of a monkey and her child.
Murata ((村田安司, 1896-1966), one of Japan’s top early animators, is renowned for his skills as a cutout animator. He learned the craft of animation from Sanae Yamamoto (山本 早苗, 1898-1981) and became a pioneer in the field of educational animation. He made films for the Yokohama Cinema company.
Although the screenplay is an original one by Chuzo Aochi, the tale follows a pattern familiar in Japanese folk tales in which a person rescues an animal and receives a reward for his good deed. In fact, in The Monkey Masamune the messenger performs two good deeds: first saving the monkeys from the wrath of the hunter and after they present him with his reward, he uses the Masamune to rescue the hunter from a wild boar.
The Monkey Masamune is a deceptively simple black and white cutout animation. The cutouts have been so meticulously drawn and move so smoothly that in some scenes they could almost be mistaken for cel animation. In the liner notes to the Zakka Films release, Aaron Gerow explains that Murata “did not just move the pieces of paper, but changed them between frames to show more complex body movements like turning around” (The Roots of Japanese Anime, p.7).
Although the opening sequence consists only of the messenger running to deliver his message, Murata – who by this time was a seasoned animator with more than a dozen animated shorts under his belt – demonstrates his sophistication as an animator by varying the camera distance and angles. In one shot, the camera appears to be tracking left over a painterly landscape that unfolds in the background like a scroll.
When the messenger pauses for a break, we have a panning shot of the landscape that suggests we are seeing it from the messenger’s point-of-view. He playfully looks at the scenery upside-down by bending over and looking between his legs. As his head wiggles amusingly from side-to-side, Murata cuts to an unusual point-of-view shot that shakes back and forth briefly before the man comically falls over and lands on his bottom. We have become inured to the use of shaky cams in POV shots, but for 1930 this was quite unusual and innovative. 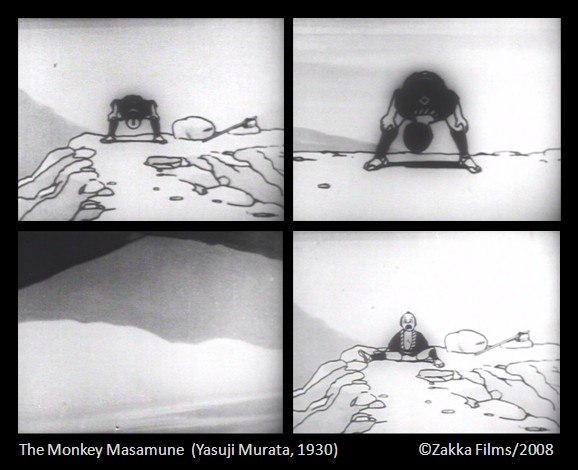 Just as I noted in my recent review of Noburo Ofuji’s Chinkoroheibei and the Treasure Box, Murata also uses irises to focus in on dialogue and action.  In the messengers confrontation with the hunter, the a box-shaped matte is placed over the scene, and has the effect of intensifying the drama of the scene.
The Monkey Masamune was originally silent and likely had benshi accompaniment during screenings.  The Roots of Japanese Anime  DVD features the soundtrack that was later added to the film, but there are still the occasional title cards that point to the film’s origins as a silent film. The film is not in as good a condition as the Ofuji films on the DVD, but despite the flashing and scratching it is still watchable.
The Zakka Films DVD has optional English subtitles and comes with an informative booklet featuring an  historical overview by Jasper Sharp (Midnight Eye) and film notes by Aaron Gerow (Yale U). Individuals can purchase this DVD for a reasonable price from independent film distributor Film Baby. Institutions should contact Zakka Films directly for purchasing information.
Catherine Munroe Hotes 2011

Posted by Cathy Munroe Hotes at 6:48 am