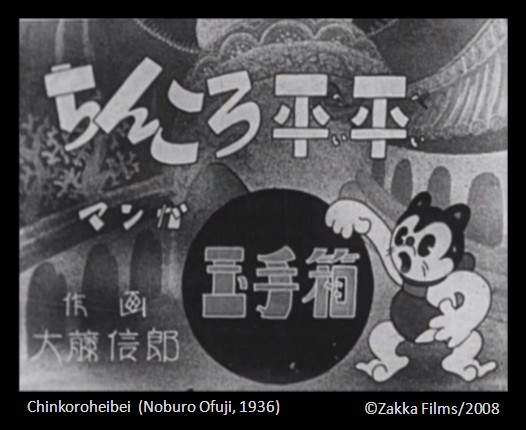 The early anime pioneer Noburo Ofuji (大藤 信郎, 1900-1961) is best known for his kirigami (cutout) animaton and kage-e (silhouette) animation. He was also quite skilled in the art of cel animation as demonstrated by his 1936 animated short Chinkoroheibei and the Treasure Box (ちんころ平平玉手箱/Chinkoroheibei to tamatebako).
An upbeat, lively animation aimed at a young audience, Chinkoroheibei and the Treasure Box tells the tale of a young fellow named Chinkoroheibei. He is a mischievous character with a real knack for getting himself into trouble either unwittingly or due to his own heedless actions. Taking a nap under a tree, a spider falls into his mouth and when Chinkoroheibei spits it out, the poor creature has lost some of his legs causing a turtle to laugh at the spider's misery. This inspires Chinkoroheibei to poke at the turtle, causing the turtle to bite Chinkoroheibei’s finger in order to escape. Incensed, Chinkoroheibei  runs after the turtle who leads him into the sea.
Underwater, Chinkoroheibei discovers the wondrous palace of the fish king. A big celebration is underway with the large fish king surrounded by cheering smaller fish with their unusual round black heads. Initially, Chinkoroheibei is not allowed into the party but he disguises himself as a fish and enters the palace. He watches as the fish king is presented with a box that the fish and crabs use to perform magic tricks in which bubbles are transformed into various sea creatures. Chinkoroheibei recognizes the box as the “legendary treasure box” and schemes to steal it away. A comical chase sequence ensues with Chinkoroheibei receiving his comeuppance in the end.
In addition to using the kind of slapstick comedy popular in both animated and live action cinema of the day, Ofuji also uses a visual device developed in the silent period: the iris. As zoom lenses were rarity in the 1930s, irises were used in order to focus attention on one part of the screen. In the case of cel animation, it removes the need to draw a new background in order to shoot a close up. A matte is placed over the existing image and gives a similar effect as a close up.
Ofuji uses mattes (cutout frames) not just as irises but also cut into cloud shapes to focus attention on one part of the screen. Some of the mattes even appear to be made of patterned chiyogami. At first, I thought the cloud-shaped mattes may have been used for practical reasons – covering part of the frame in a matte reduces the amount of the screen that needed to be drawn and re-drawn on celluloid, an expensive commodity at the time. Ofuji may also have been saving time on certain scenes in order to have more time to work on more complex scenes like the celebration of the fish king and the dramatic final chase scene. But, then in one of the shots of the treasure box, some of the creatures that appear out of the bubbles swim away over the chiyogami matte, suggesting that Ofuji may just have used the mattes because they simply appealed to him aesthetically.
Chinkoroheibei resembles a kind of tailless mouse with small, round ears.  He bears a striking resemblance to Mickey Mouse. Japanese animators in the 1930s (and the next generation of animators and manga-ka who were just children at the time like Osamu Tezuka, Takashi Yanase, Yoichi Kotabe, Monkey Punch, and so on) were strongly influenced by the two of biggest names in animation of the time: Walt Disney and the Fleischer brothers. This stylistic influence can be seen not only in the character design, movement, and use of physical comedy in Chinkoroheibei and the Treasure Box, but also in other cel animation by Ofui and his peers.  Kon Ichikawa’s Shinsetsu Kachi Kachi Yama (1936), Yasuji Murata’s Private 2nd Class Norakuro (1934), and Mitsuyo Seo’s Sankichi the Monkey: The Storm Troopers (1934) are a few examples that I have seen.
Ofuji uses the standard cel animation practice of using a stationary background with movement in the middle- and fore-ground. The character movement is smoother than in his cutout animation (see: The Village Festival or Song of Spring). Ofuji adds depth to the underwater scenes through the use of bubbles and swaying sea plants both in front of and behind the central action. The most impressive scene technically is the final chase scene. Water is notoriously difficult to animate and Ofuji does a stellar job of it considering the technical limitations of the time.
Chinkoroheibei and the Treasure Box  appears on the Zakka Films DVD The Roots of Japanese Anime with optional English subtitles. A striking image of Chinkoroheibei in profile is used on cover of and in promotional materials for the DVD.  The Roots of Japanese Anime comes with an informative booklet that includes historical background by Jasper Sharp (Midnight Eye) and film notes by Aaron Gerow (Yale U). Individuals can purchase this DVD for a reasonable price from independent film distributor Film Baby. Institutions should contact Zakka Films directly for purchasing information.
Catherine Munroe Hotes 2011