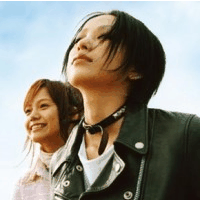 This film was one of the biggest movies of 2005 in Japan. The sequel just premiered in Tokyo on the weekend and I am hoping to see it sometime this week. In preparation for the big event, I decided to watch the first movie again to remind myself why I enjoyed it so much.

Like the anime of the same name, director Kentaro Otani (大谷健太郎) and screenwriter Taeko Asano (妙子浅野) have adapted the story from Ai Yazawa (矢沢あい)’s popular shoujo manga. It tells the story of two young women called Nana who are thrown together by fate when they meet on a train bound for Tokyo. Nana Komatsu (小松奈々) is the kawaii shoujo (cute girl) and Nana Osaki (大崎ナナ) is the kakkoii shoujo (cool girl). Both young women are 20, which is the age at which the Japanese celebrate a person’s ‘coming-of-age’.

Nana Osaki gives Nana Komatsu the nickname ‘Hachi’ quite early on in their relationship after the famous Shibuya dog: she’s cute, friendly, and obedient, but needs a lot of attention! The name Hachi is also humorous because ‘nana’（七）is one of the pronunciations for the number 7 in Japanese and ‘hachi’ (八) means 8. Hachi, like many Japanese, is a very superstitious person and because of her given name, the number 7 resonates very strongly with her. For example, the girls find an apartment that costs 7万 (70,000 yen) in room 707.

Many viewers may find Hachi’s obsession with numerology and superstition wacky, but it is not so strange in Japan. For example, the number 4 (pronounced yon or shi) is considered unlucky in Japan because the word ‘shi’ can also mean ‘death.’ This superstition is so strongly believed that stores never package things in groups of four. In the West it is not unusual to buy dinnerware sets for four people, but in Japan one would buy 5.

In a way, Nana is a coming of age story. Both young women come to Tokyo for different reasons and find out a lot of things about themselves and each other along the way. It is also a story about love and intimacy between female friends. With a male director helming the film I was worried that the subtleties of the female characters and their relationship with each other, which Yazawa captures with poignancy and humour, might be lost. Overall though, I think that the film did a pretty good job of capturing the attraction and affection that develops between the two Nanas.

As with any adaptation, a great deal of story had to be excised from the original manga in order for it to succeed as a movie. This meant that some of my favourite secondary characters like Junko and Kyosuke, whose wry wit and sarcasm give a good balance to the sugary sweetness of characters like Hachi and Nobu, have been reduced to a mere handful of lines. I think the filmmakers made the right decision. The Nana manga has a rather large cast of characters, which works in the anime adaptation, but would have been impossible to squeeze into a movie without the running time going over two hours. Only a director with incredible talent (like the late, great Robert Altman) should ever try to pull such a feat off.

Hachi’s character benefited the most from the excising of story material from the original manga. With the sad tale of her teenaged affair with a married man and her numerous crushes on passing acquaintances left on the cutting room floor, Hachi’s personality is rendered much more innocently sweet and endearing. Aoi Miyazaki (宮崎あおい), with her great big puppy dog eyes, is perfect in the role, playing the role with sweetness and warmth in a very natural manner.

Two of the biggest reasons for the huge success of this film in Japan last year are the fashion and the music. Ai Yazawa’s manga are all heavily influenced by Vivienne Westwood as well as a retro punk aesthetic. Nana Osaki and her boyfriend Ren Honjo belong to competing punk-influenced bands and take their inspiration from the Sex Pistols and of course the legend of Sid & Nancy. As a symbol of her love for him, Nana gives Ren a lock and chain necklace similar to the one worn by Sid Vicious.

Nana Osaki is played by Mika Nakashima (中島美嘉), a popular musician in Japan whose large fan base surely helped with the movies success. Her hit single from the film “Glorious Sky” had lyrics written by Ai Yazawa herself and has played constantly in shops throughout Japan ever since the film debuted. Nakashima also demonstrates that she has great acting ability. Nana is perhaps the most complex character of the story. She has a lot of rough edges due to her difficult childhood (never knew her father, abandoned by her mother, raised by a strict grandmother) and has a lot of ambition for herself as a singer, but Nakashima was also able to subtly demonstrate that Nana has a lot of capacity for love and compassion. Nakashima and Aoi Miyazaki had great capacity between the two of them and like many fans of the series I was sorry to hear that Miyazaki wasn’t signed on for the sequel.

The other big hit from the film was “Endless Story” sung by a young American woman of Japanese and Korean heritage, Yuna Ito (伊藤由奈). Ito plays Reira (Japanese version of the name Layla), the lead singer of Ren’s band, TrapNest. The film was the professional debut for Ito and the producers built up a great deal of publicity surrounding the mystery identity of Reira prior to the film’s release. I can’t really comment on Ito’s acting ability because she only got one line in the film, but she certainly is beautiful and can sing well. I have heard that she gets more lines in the sequel. Certainly, her look and her mixed background work for the part as in the manga, Reira is hiding the fact that she comes from a mixed Japanese-American background because her producers want to market her as a good “Japanese” girl.

I think the reason that I enjoyed this film was that the story has a good mix of fantasy and reality. It hearkened back to the films of John Hughes that I loved as an adolescent – Sixteen Candles (1984) The Breakfast Club (1985), Pretty in Pink (1986), Some Kind of Wonderful (1987) – which all had strong female protagonists, dealt with the real difficulties that young people without condescension, and featured great pop-rock music and cool fashions.

On the fantasy side, Nana appeals to the dreams of young women who want to wear cool clothes and then of course there is the appeal of the sexiness and glamour of punk-inspired pop music. On the realism side, this story does not give us the usual boy meets girl schlock. Sure we follow the ups and downs of Hachi’s relationship with her boyfriend Shoji (a disappointingly wooden performance by Yuta Hiraoka) and the will-they-won’t-they get back together drama of Nana and Ren, but the centerpiece of the film is the burgeoning friendship between the two female leads and the coming-of-age dilemmas that both women are working through.

The story of the two Nanas keeps us hooked because it doesn’t answer all our questions. Although there is a resolution of a kind at the end of the movie, there are many ongoing questions that keep us wanting more: What is the true nature of Hachi and Nana’s feelings for each other? Are Ren and Nana truly right for each other? What has happened between Reira and Yasu? [Or Reira and Shin? -- if you’re reading the manga/watching the anime.] Will Hachi ever develop any confidence in herself and ambition for her future? And of course, we are all rooting for Nana and her band Blast (short for ‘Black Stones’) to make it big! 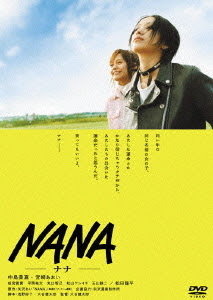