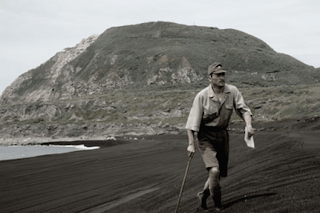 is a remarkable film on many levels. It is rare for a war film, whose focus is usually on the heroism and patriotism of a country’s soldiers, to consider the human face of the enemy. Such films are even rarer in the history of films about the conflict between the Japanese and Americans during World War II.

During the war, audiences in the English speaking world were trained to view the Japanese enemy as a monolithic entity with films that emphasized myths and stereotypes about the Japanese. For example, there’s a deliberate play on words in the way the marines in Wake Island

(John Farrow, 1942) – the first combat film set in the Pacific - refer to the Japanese as “Those yellow Nips” – ‘yellow’ signifying both the colour of their skin and their perceived cowardice.

– turned the true story of five brothers who died together into wartime propaganda. Upon hearing the news about Pearl Harbor, one of the brothers says that the war will be over in a matter of weeks because the Japanese, “They can’t fight. They close their eyes when they fire off a gun.” Here cowardice is defined as the inability to face the enemy, to look them in the eye and have a true Hollywood showdown.

The Japanese enemy is rendered faceless sometimes literally, sometimes metaphorically in the films of this period – particularly in the series of John Wayne Pacific War films. In John Ford’s They Were Expendable

(1945), for example, the enemy is represented by the deadly technology they use, such as fighter planes and warships, in contrast to the close-ups of the faces of Americans and Filipinos during the attacks.

Technology does result in the facelessness of modern warfare but in the case of the Pacific War, this impression was created by domestic propaganda at the time and does not reflect the true circumstances on the ground. Veterans of the attack on Pearl Harbor have testified that the Japanese pilots were flying so low that they could see their faces. Films like the terribly dull Japanese-American co-production Tora! Tora! Tora!

(1970) and the stomach-turningly saccharine Pearl Harbor

(2001) remedy the historical inaccuracies to a certain extent, but are difficult to sit through unless you are a history buff (Tora!) or a fan of souped up romances starring Ben Affleck (Pearl Harbor).

When the faces of the Japanese enemy can be seen, they are generally shown in one of two ways: as foolish-looking buck-toothed stereotypes or as taking pleasure in warfare and cruelty. Ironically the films that have done the most to understand the humanity of both the Japanese and the Allied Forces have been films about Japanese P.O.W. camps. Outside of the atrocities committed by the Imperial Japanese forces against Asians during the war, the P.O.W. camps were the site of some of the most horrific war crimes imaginable. Yet, films like Three Came Home

(1983) all made great strides in trying to understand the motivations of both the captors and their prisoners.

(2006) so much that he encouraged one of his research assistants, Iris Yamashita, to dig deeper into their story. The result is a deeply moving film that follows the Japanese soldiers at Iwo Jima from their preparations for the American invasion up until their last heroic push at the end of the battle. In Letters from Iwo Jima, Eastwood dispenses with many stereotypes of both Japanese and American soldiers and tries to tell the Japanese side of the battle with dignity.

Inspired by the Picture Letters

of Army General Tadamichi Kuribayashi, the story of the Japanese soldiers if told through the letters they wrote home to their loved ones. As almost all of the 20,000 plus Japanese on the island were killed, anecdotes from letters are really the only way their histories can be recounted.

Ken Watanabe, a face familiar to international audiences from his outings in The Last Samurai

and Memoirs of a Geisha

, plays General Kuribayashi. Kuribayashi and Baron Nishi (played by Tsuyoshi Ihara) add an element of poignancy to the film for both men had spent time in the United States and had many American friends. Kuribayashi knows that the Japanese are doomed to failure due to America’s industrial superiority. His understanding of the enemy and his unconventional leadership style lead to many interesting conflicts between officers in the film.

The Baron Nishi character is also based the historical figure Takeichi Nishi, who won a gold medal at the 1932 Olympics in Los Angeles. One of the most moving moments in the film comes when he translates a dead American soldier’s letter from his mother to the soldiers in his unit. The young soldiers are deeply moved by the letter to the point that young Shimizu (Ryo Kase) says that his own mother could have written such a letter. This is just one moment of many in the film where Eastwood demonstrates that despite different belief systems and social customs, Japanese and American soldiers are actually not so different from each other in terms of their hopes and dreams for themselves and for their families.

The character that we are invited to identify with the most strongly is Saigo, played by Kazunari Ninomiya. Saigo is filled with doubts about the war, misses his wife so much that he writes her letters whenever he has a chance, and longs to survive the war so that he can meet his newborn daughter.

Ninomiya was a clever casting choice on the part of Eastwood. Not only does he play the role with the needed dignity and delicacy but Ninomiya has a large fan following from his career in the boy band Arashi. This means that a lot of young Japanese people will go out and see the film. In fact, on the opening weekend here in Japan, the film took the number one place over many hotly anticipated new releases. From what I understand, World War II (particularly Japan’s aggression in the early part of the twentieth century) does not get taught with much depth in schools in Japan and I think it is important for young people to learn about this difficult time in their nation’s past.

As the film progresses, the Japanese slowly but surely decrease in numbers, and knowing that very few Japanese survived Iwo Jima I wondered throughout the film how they were going to end the film without overwhelming the audience with despair. In the end, I think they did a good job of demonstrating the extent of the tragedy and futility of war but leaving us with one small ray of hope for the future (have no fear, no spoilers here!).

Perhaps the choice of colour for the film had a great deal to do with helping hold the viewer at a point of objectivity (though I do admit I had tears in my eyes on more than one occasion). The image is almost completely drained of colour, to the point that at the beginning I thought that it had been shot in black in white or sepia. It has the appearance of a faded old colour photograph. In the scenes with explosions going off, the orange is so bright in contrast to the dull colours of the surroundings that it has the quality of the hand-tinting that was done to silent films.

This is the first film I have ever seen in which American soldiers are actually shown to do unethical and unheroic things. Having watched countless John Wayne war films the shock was truly enormous, and marks for me an important shift in the war film genre. Letters from Iwo Jima

, her memoir of her years spent in gruelling conditions in a P.O.W. camp with her young son:

“The Japanese in this book are as war made them, not as God did, and the same is true for the rest of us. We are not pleasant people here, for the story of war is always the story of hate; it makes no difference with whom one fights. The hate destroys you spiritually as the fighting destroys you bodily.”

I highly recommend that everyone go out and see the film. It pulls down a lot of stereotypes (“warrior culture”, samurai spirit, uniformity of society, etc.) about the Japanese that have stood for much too long in Western culture.

2008/12/17 Update: a special edition with English subtitles now available on DVD in Japan: