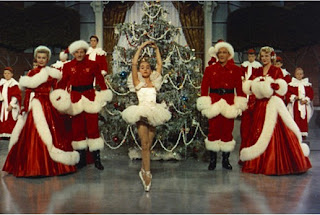 My Christmas holiday always includes a screening of the hit film of 1954: White Christmas. The New Yorker, the only repertory cinema (sadly demolished a few years ago) in my hometown of , had a screening of the film every December 23rd. My grandmother and I made it our Christmas ritual when I was a teenager.

Although I do embrace digital technology, home viewing will never replace the magic of the shared cinematic experience. Every year, that aging cinema with its uncomfortable, squeaky seats would be filled with small groups of people full of holiday cheer who would laugh at all the jokes they’d heard a dozen times before and sing along with every toe-tapping Irving Berlin tune. During the spectacular finale when the women wear those fabulous red gowns next to the giant Christmas tree and the doors open in the rear to reveal ‘real’ studio snow falling, everyone in the cinema would put their arms around those sitting next to them and sing “White Christmas” along with Bing Crosby, Danny Kaye, Rosemary Clooney & Vera-Ellen.

The first year my grandmother and I went was the most magical. As we left the cinema, we discovered that it had truly begun snowing for us as well. Huge, fluffy wet flakes that covered the ground in a thick blanket.We drove home cautiously down the unplowed streets singing all the way.

I now live far from  and my grandmother has passed away, but I make it my ritual to watch White Christmas with people that I love every year. Sure, it has a hokey plot, but the jokes never get stale. Such as when Phil Davis (Kaye) pesters Bob Wallace () about something and Bob interjects: “When I figure out what that means, I’ll give you a withering reply.” And, I defy anyone not to laugh when Bing & Danny do the ‘Sisters’ feathered blue fan routine in semi-drag, with their pants rolled up to reveal the suspenders holding up their socks. Danny Kaye’s over-the-top performance caused the crooner’s mask to slip and it’s such a hoot to watch Bing Crosby as he loses it and convulses in genuine laughter.

This was the first film  shot in VistaVision, a process designed to compete with Cinemascope.The result on the DVD transfer is stunning. The images are clear and crisp and the colours are simply gorgeous.  also went out of their way to assemble a stellar cast and crew for this picture. The renowned Edith Head (won 8 Oscars out of 34 nominations!!) designed the costumes, Robert Alton (Ziegfeld Follies, Easter Parade ) does choreography and makes a cameo appearance, Loyal Griggs (Shane) wears the DOP mantel and Michael Curtiz (, Mildred Pierce) directs.

If you watch White Christmas on TV every year then you should spring for the DVD this year. They released the DVD back in 2000 and were able to get the last surviving lead Rosemary Clooney, who passed away in 2002, to give them a 16-minute retrospective interview and a commentary track for the film. Her anecdotes about her fellow stars and Michael Curtiz are full of humour and warmth.

Many reviewers at the time criticized the commentary track because they thought that Clooney does not talk enough, but I love it. Most commentary tracks, especially those of directors and producers, make me roll my eyes because they are so self-indulgent and bragging. This off-the-cuff commentary track makes you feel like Rosemary Clooney is sitting on the sofa with you, delightedly sharing her fond recollections of the production. She doesn’t talk the whole time, but chuckles along with the good jokes and even mentions at one point how farfetched the plot is in place.

I particularly enjoyed the anecdotes that she shares about Bing Crosby. She depicts him as a hard-working man with a sense of humour and someone you could rely on as a friend through thick and thin. It’s an interesting counter-balance to one-dimensional child-beater label he acquired after his son Gary’s explosively bitter memoir.

I love Clooney’s self-deprecatory humour when she talks about the fact that Vera-Ellen couldn’t sing (she was dubbed by Trudy Stevens) and that she herself couldn’t dance. It must have been quite the ordeal because almost 50 years later you can hear her on the commentary track counting the steps out loud to herself: “… and 5, 6, 7, 8!”. Hilarious! It brought back memories of ballet classes I took when I was a girl.
So this Christmas, put a fire in the fireplace, cuddle up with someone you love on the sofa with a cup of warm eggnog and sing and be merry with Rosemary, Bing & the gang!