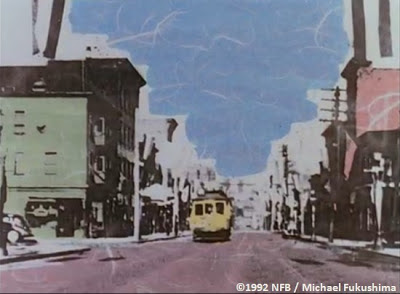 “Let our slogan be for British Columbia: No Japs from the Rockies to the sea.”

These were the words famously spoken by Ian Alistair Mackenzie the Liberal Cabinet Minister for Vancouver Centre during the 1944 federal election.  After the attack on Pearl Harbor, Mackenzie had played a key role in the government's decision to intern Japanese-Canadians living on the Pacific coast for the duration of the war.  In the 1970s and 1980s literature and film began to surface addressing the injustices suffered by Japanese-Canadians in British Columbia.  Pierre Burton addressed the subject on his television show and the materials presented were published by Janice Patton in her book The Exodus of the Japanese: Stories from the Pierre Burton Show (1973) and journalist Ken Adachi wrote The Enemy That Never Was: A History of the Japanese Canadians (1976).  Two semi-autobiographical works, Shizuye Takashima’s A Child in Prison Camp (1971) and Joy Kogawa’s novel Obasan (1981), have become staples in the Canadian classroom because of the moving way that they tell their stories from the point of view of a child.

Since Prime Minister Brian Mulroney’s official apology to the victims of this abuse of human rights in 1988, many Nisei, Sansei, and more recently Yonsei have come forward to share their family stories.  Michael Fukushima’s animated documentary Minoru: Memory of Exile (1992) was one of the first of the post-redress films.  His proposal to make an animation based upon his father Minoru Fukushima’s story landed on the desk of William Pettigrew at the NFB at about the same time that they were contacted by the Japanese Canadian Redress Secretariat (JCRS) about the possibility of funding educational films about the internment.

Fukushima did not learn of his father’s experiences until the issue of redress raised his head in the late 1980s.  According to the film’s first-person narration, in the fall of 1987, at the age of 26, Fukushima asked his father for the first time about his childhood.  Fukushima’s guiding voice is interwoven with the voice of his father and accompanied by traditional Japanese music played on the shamisen, koto, and taiko. The animation uses a variety of media including cutouts, paintings, and photographs.

The past and the present are also interwoven through Fukushima’s use of relics of the past in the form of family and archival photographs and archival documents.  As Minoru begins to tell of his happy early childhood in Vancouver, the image of Minoru as a child comes to life in a faded family photograph.  A colourful cutout of Minoru jumps out of the picture and leads us through archival photographs of Vancouver’s city streets.  Minoru looks back fondly on his childhood in Vancouver.  He describes how his parents ran their grocery store for almost 20 years from when they arrived in Canada until their internment.

Minoru speaks of how they were sheltered as children from news of the war.    Even the internment camp didn’t seem that bad to the kids: it was almost like a summer camp and he recalls learning how to swim there.  This is a sentiment shared by renowned environmentalist David Suzuki in his 2007 eponymous autobiography, who wrote that his love of nature was came from the idyllic time he spent in the interior of British Columbia – a time when he was blissfully unaware of the hardships endured by his parents until after the war.

It is not until the end of the war that things take a turn for the worse.  The Fukushima family discovers that despite being Canadian citizens, they must make a choice of moving somewhere outside of British Columbia in Canada or be deported back to Japan.  It turns out that the internment of Japanese-Canadians ignited “long-standing anti-Japanese sentiments” and local merchants, fishermen, and farmers supported the government in the seizing of all Japanese property and liquidating it.  The funds raised from the sale of their property was used to fund the cost of their own internment.

Minoru: Memory of Exile by Michael Fukushima, National Film Board of Canada

Uncertain as to what would be best for the family Minoru’s father decides to take the Japan option although Minoru and his siblings cannot speak any Japanese and are Canadian citizens.  They return to their father’s village where they encounter poverty and resentment by the locals who see them as foreigners.  By the time Canada reverses its policy on Japanese Canadians in the late 1940s because of the United Nations Commission on Human Rights, their family it too poor to be able to afford the journey back to British Columbia.  In a case of bitter irony, when the Korean War breaks out in 1950, the Canadian government tries to recruit the same Japanese-Canadians they had banished a few years earlier.  Minoru jumps at the chance along with about 40 others and thus begins his journey back to the only country that ever felt like home to him – despite the injustice and racism he experienced there.

Minoru: Memory of Exile is an early example of an animated documentary – a medium that has become more common nowadays with great films like Waltz with Bashir (Ari Folman, 2008) and Ryan (Chris Landreth, 2004).  It demonstrates the unique ability of animation to express things with greater depth and poignancy than mere archival footage or interview footage could ever do.  The animation fills the “silences” that Fukushima speaks of as being a large part of his identity as a Sansei Canaidan.  Following in his footsteps, Yonsei Canadian animator/documentary filmmaker Jeff Chiba Stearns also used animation to bring to life his Uncle Suey Koga’s stories about the internment in his feature length documentary One Big Hapa Family (read review).

Michael Fukushima directed at least one other animation at the NFB before beginning his transition into becoming a producer.  Over the past decade he has built a reputation over as one of Canada’s top animation producers.  Minoru: Memory of Exile shows us his roots as an artist in his own right.  It is both informative and moving in how it tells the story of Minoru.   A warm tribute from a son in recognition of the sacrifices made by both his father and his grandparents to enable him to grow up Canadian.