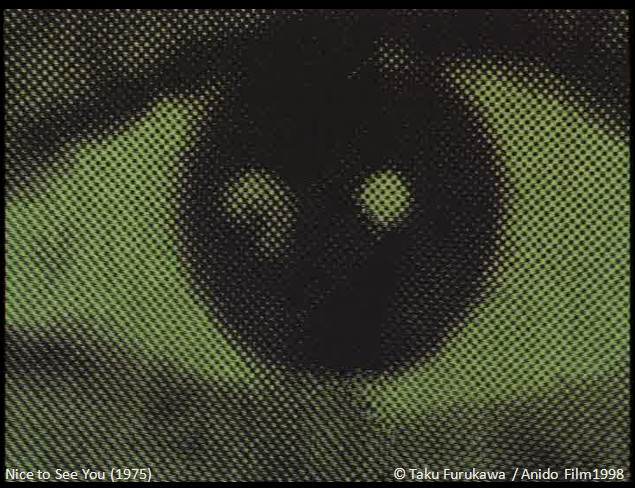 Taku Furukawa is best known for his doodling style of drawn animation in films like Phenakistiscope (1975) and Tyo Story (1999) and his much loved contributions to the NHK’s Minna no Uta series.  He has also played with other techniques of making animation such as direct animation (painting directly onto the film stock) in Calligraphiti (1982) and Direct Animation (1987) and he was one of the first indie animators to experiment with early computer animation in Mac the Movie (1985) and Play Jazz (1987).

Nice to See You (ナイス・トゥ・スィ・ユー, 1975) is a silent film that Furukawa made early in his career.  At the beginning, it appears to be an abstract animation that plays with black shapes drawn on a colourful background.  Shaky black squares shot on 16mm dance on a green background, their blotchy edges occasionally blurring into one another.  The black squares then transform into green circles on black and then back again as if the two patterns were fighting against each other for control of the screen.  The movement of the shapes is such that it is hard to determine whether or not the shapes are moving across the screen or the camera is moving across the paper on which it has been drawn.  The patterns shift and move with the ease of a kaleidoscope.

All of a sudden the shapes get smaller and the camera moves back to reveal that the pattern of dots and squares were not random, but together make up the image of an eye.  The message of the film is clear: how we interpret images – and by extension how we see the world – is determined by our perspective.  The closer we are to something does not necessarily mean that we see it more clearly.  Sometimes we need to step back in order to see the bigger picture. 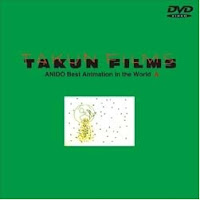 Nice to See You appears on the Anido DVD Takun Films and can be ordered through their website.

Taku Furukawa re-made Nice to See You in collaboration with video game producer and CG animator Noriyuki Boda  and called it TAKU BODA (2009).