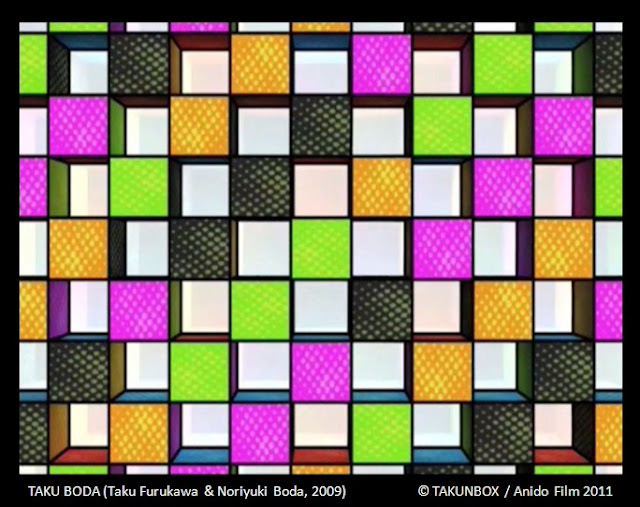 One of Taku Furukawa’s most admirable qualities is his enthusiasm for playing with technologies both old and new.  His Annecy Special Jury Award-winning film Phenakistiscope (1975) brought the 19th century optical amusement into the 20th century and he was one of the first alternative animators to experiment with computer animation with his films Mac the Movie (1985) and Play Jazz (1987).

TAKU BODA (タクボーダ/Nice to See You Re-Mix, 2009) combines the animation genius of Taku Furukawa with the technical wizardry of video game producer and CG animator Noriyuki Boda.  It is a remake of Nice To See You (1975), a wonderful little abstract film that Furukawa made on 16mm.   TAKU BODA starts and ends with the original film which was almost monochrome – just black and green – and had no soundtrack.  The re-mix flips the original film on its head by injecting colour, lively music, and three dimensional CG movement.  The shapes and movement of the original film are placed onto the sides of cubes which roll across a grey on white grid.  The animation is as visually engaging as the accompanying music, with lots of variety of patterns and shape size.

Nice To See You conveyed a message about how we interpret images; that sometimes we need to change our perspective to see the bigger picture.  A similar message is conveyed by TAKU BODA, but with the added caveat that great art is created not just through exploring the world from different perspectives, but also from being open to new methods and tools.  There are few films that blend old and new animation practices with such harmony as TAKU BODA.