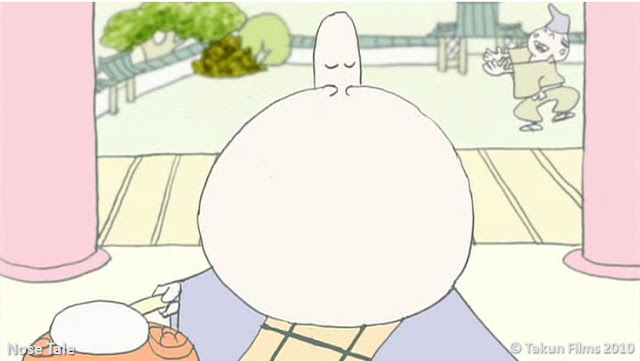 After reading Ryūnosuke Akutagawa’s short story “The Nose” (鼻/Hana, 1916), the great writer Natsume Sōseki is said to have written a letter to Akutagawa proclaiming: “I found your piece ["The Nose"] very interesting.  Sober and serious without trying to be funny.  It exudes humour, a sure sign of refined taste.  Furthermore, the material is fresh and eye-catching.  Your style is well-polished, admirably fitting.” (source)

One could use similar adjectives to describe Taku Furukawa’s animated short Nose Tale (はなのはなし/Hana no hanashi, 2010).  Reportedly inspired by a bout of hay fever (source – which would explain the runny noses of many of the supporting characters in this film), Nose Tale is a mash-up of five classic stories from around the world.  Four of these stories concern men with oversized noses:  “The Nose” by Akutagawa, “The Nose” (1835-36) by Nikolai Gogol, “The Adventures of Pinocchio” (1881-83) by Carlo Collodi, and “Cyrano de Bergerac” (1897) by Edward Rostand.

Furukawa starts off by cutting between each of the stories, but in the climactic scene the men with giant noses all come together from their disparate times and places for a dragon viewing party – a concept adapted from another Akutagawa story “Dragon” (龍, 1919).  The dramatic conclusion is unexpected and delightful.

The concept is indeed fresh and eye-catching and exudes the tongue-in-cheek sense of humour one has come to expect from a Furukawa film.  In all my years studying the art of cinema, I never expected to encounter a film that makes a point of cutting between stories by matching the shape of an oversized nose.  It is so ridiculous as to be wonderful.
by Catherine Munroe Hotes 2012

The stories are also tied together by the music of Toshiyuki Honda, whose compositions have also featured in the animated films  Miyuki-chan in Wonderland (Tetsuro Aoki, 1995), Metropolis (Rintaro, 2001), and Yona Yona Penguin (Rintaro, 2009).  The pieces “Spinel” and “Tellurium” from Songs of the Milky Way and “TERRA”, an étude for saxophone, were arranged and performed by Honda himself.

Nose Tale is available on the Takun Films 2 DVD, which can be purchased at Anido. ORDER NOW

Posted by Cathy Munroe Hotes at 5:44 am