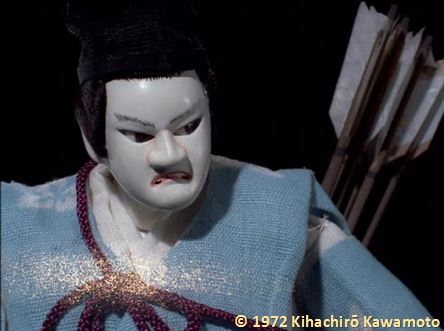 When Kihachirō Kawamoto (川本 喜八郎, 1925-2010) travelled to Prague in 1963 to visit the studios of Jiří Trnka (1912-1969), he was famously given the advice to look at his own country’s history of puppet traditions in order to improve his craft as a puppet animator. While he did throw himself into the study of the Bunraku theatre upon his return to Japan, he did not adapt any traditional Bunraku plays for his puppet films.  Instead, he looked to the wealth of legends from Japan's ancient past.

The Demon (鬼/Oni, 1972), which I think stands as Kawamoto’s first great masterpiece of puppet animation, is an adaptation of a tale from the 12th century anthology Konjaku Monogatari (今昔物語). The story concerns an ancient legend that says that when people grow old they turn into demons who will devour their own children. The story is told with title cards instead of a narrator with traditional musical accompaniment by Seiji Tsurusawa on shamisen and Goro Yamaguchi on shakuhachi. The music was also composed by Tsurusawa.

Two brothers live with their aged mother, the title cards tell us. The introduction to the story mixes puppets with a series of drawn images etched on black which sets up the story of the mother’s life of suffering. Born into this world to unfeeling parents, she was an outcast of her community as a child and suffered greatly at the hands of her husband. Her life has been truly wretched as she has only known illness and poverty. In the end, the title cards tell us, she has suffered a “human life inhuman without a trace of light.”

One day, while out hunting, the brother dressed in blue’s chonmage (topknot) is grasped by a ghostly hand from above. Unable to escape, the brother dressed in red rescues him by shooting the arm off using his bow and arrow. The brother in blue falls to the ground with the gruesome hand still grasping the chonmage. “A demon’s arm!” cry the brothers, and they run home in terror. When they arrive, they find their mother in bed with one of her arms gone. The mother transforms into an oni (demon) and dances with the disembodied arm. The film ends by relating to us the ancient superstition, ending with the observation “how horrible”.

In his early puppet films like The Demon, Dojoji (1976) and House of Flames (1979),  Kawamoto constructed horizontal sets and shot them from above. This is a technique which he had seen Břetislav Pojar (b. 1923) use during his 1963 visit to Eastern Europe (see the JMAF Animation Meister interview by Takayuki Oguchi). Using this technique, Kawamoto could also place images in the background and foreground using plates of glass, giving the film its Yamato-e look. The film looks absolutely stunning with its autumnal colour palette against black. I love the artistic flair of little touches like the bamboo forest and the twinkling fireflies.  The puppet movement is more refined than in his first independent puppet film The Breaking of Branches is Forbidden (花折り/Hana-ori, 1968).  In fact, in some scenes the puppets almost look as if they are dancing. 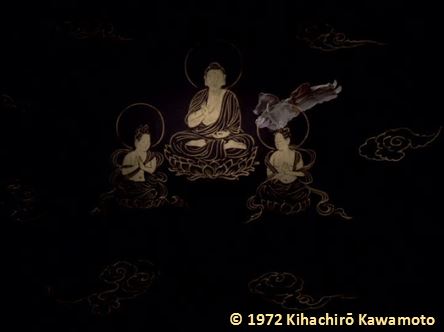 The theme of suffering in the film comes from Kawamoto’s study of Buddhist philosophy - which is openly referenced in the art of the opening sequence (see above image). Each of his animated films tackles the theme of suffering in some way, particularly his final masterpiece The Book of the Dead (2005), which depicts a woman on the path to enlightenment.

The Demon won Kawamoto his first of six Noburo Ofuji awards – one of which was for his completion of his friend Tadanari Okamoto’s final film The Restaurant of Many Orders (注文の多い料理店, 1991).

This film is available with purchase with English subtitles from cdjapan: