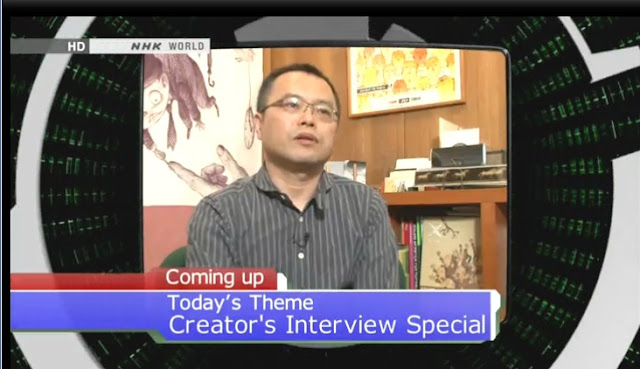 Koji Yamamura was a featured guest the NHK World programme  imagine-nation today.  He first spoke about his early childhood interest in drawing animation.  He then went on to discuss his latest film Muybridge's Strings, which is playing this month at the Tokyo Metropolitan Museum of Art (learn more about this event): 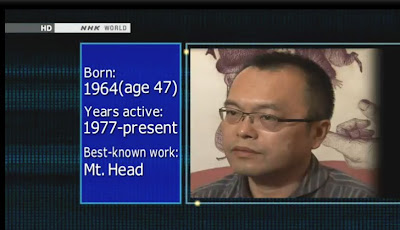 On his childhood and his creative process

"I think my earliest memory of drawing something was at home, before I started kindergarten. In fact, I almost think that’s my first memory altogether. Drawing pictures is so natural to me that I don’t think there was even a day when I didn’t draw. By the time I thought about it, I found myself in a job in which I draw every single day. It’s a fundamental part of my life."

"I was an extremely curious child and this was something that I realized even at the time. I love drawing, but I wanted to try so many different things as well. Even when watching anime on TV, instead of just enjoying it, I looked at it from the production side. I thought about how they drew certain things and what kids of pens and paints they used. I was fascinated by all those technical questions." 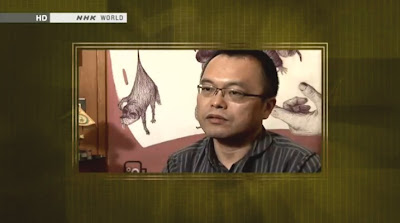 "I was 13 when I tackled my first animation. I created the entire story, the pictures, background and direction and even composed the music for it. I handled every aspect of it myself. This was during my childhood, so we’re talking about the 70s, I guess. There were very few independent full stop animations back then, let alone ones created by children, so I got a lot of attention for it. How I felt back then is part of the foundation of who I am when I create something today."

"Thinking about the nature of life and the world is something that feeds the part of me that makes animation. It’s a vital process that allows me to create animation. Of course, I’m focusing on the work at hand itself, but I’m always thinking about my life as I create. Lots of different feelings and ideas change during that period. I’m always trying to find something new and to keep thinking as part of my creative process." 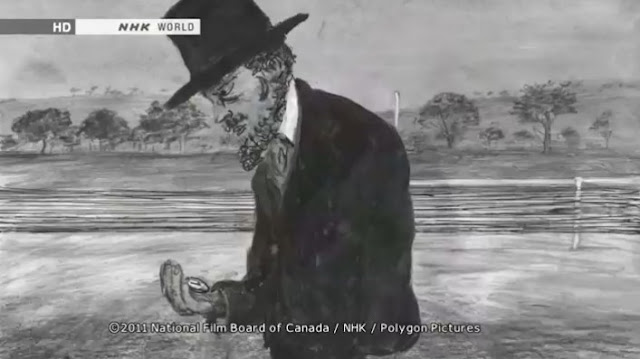 It took a total of seven years from Yamamura coming up with the original concept until the animated short's completion.  Muybridge's Strings is partly inspired by the life of photography and early cinema pioneer Eadward Muybridge (1830-1904).  His most famous photography experiment was set up to settle a debate about  whether or not a galloping horse has all four of his hooves off the ground at any point.  He set up a number of cameras that used glass plates in a line, with the cameras triggered by strings as the horse passed by.
A parallel contemporary story runs through Muybridge's Strings that is based on Yamamura's own experience of his teenage daughter growing up.  Yamamura explains:

"The two time periods are drawn in parallel and the animation aims to make people think about the actual nature of time. It was partly inspired by the idea of using string to take photographs, which tickled me as a visual image. The other story comes from my own life." 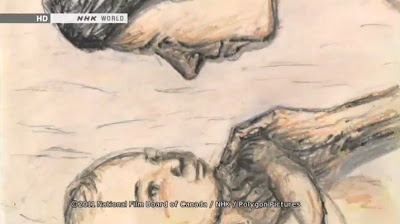 "Through watching my daughter grow up I have a strong sense of the fragility and the extraordinary nature of time. Animation has a way of making “meaningful” time out of “empty” time. So I think about it a lot and always wanted to use time as a theme. I guess that’s how this work came about." 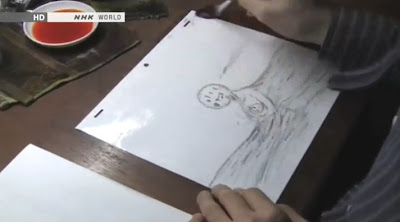 "I’m pretty fast at drawing so the pictures are done quite quickly, nut the animation itself is a labour intensive process. Therefore, I get the chance to think a lot while I’m tied up in that process. In that sense animation is perhaps the best reflection of who I really am."

Support Koji Yamamura buy ordering his work on DVD:
To order from Japan via cdjapan:

Posted by Cathy Munroe Hotes at 5:54 am