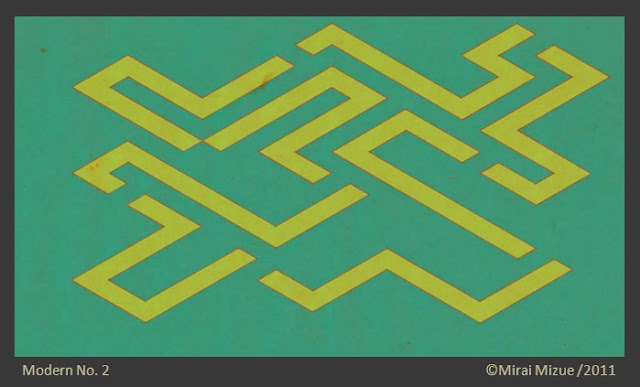 This month’s Venice Film Festival was a great success for Japan with Shinya Tsukamoto’s film Kotoko winning an Orrizonti Prize and teenagers Shota Sometani and Fumi Nikaido winning the Marcello Mastroianni Award for their performances in Sion Sono’s Himizu.
Mirai Mizue of CALF also had the honour of presenting  his latest animated short Modern No. 2 (2011) at Venice. It is a follow-up to his work Modern (2010) which was inspired by optical illusions, like the paintings of M.C.Escher. He made the films using isometric drawings on graph paper. In the “Making of” extra on his DVD Mirai Mizue Works 2003-2010 (order now from CALF), he explained that while making Modern he set himself the rule of using only three kinds of lines: one vertical and two slanting lines. Mizue is interested in the concept that animation can be very good when one imposes a limitation on movements. He tried to come up with many ideas while keeping within the rules he set for himself in order to prove that one can make great films even when using a minimal number of elements.
When people come across Mizue’s work on video-streaming sites (check out his profiles on Vimeo and Youtube), they often mistake his geometric and cell animation for CG. Mizue could have chosen to make Modern using CG, especially as it only involves straight lines, but in fact he always draws each individual frame by hand. They are then scanned and edited into a video on the computer.  If you look closely, you can see how his films differ from CG in their textures and movements.
In his shared press conference with Shinya Tsukamoto, Mizue explains his techniques and his inspiration for Modern No. 2 The colours were inspired by traditional Japanese art. Instead of the grey tones of the backgrounds in Modern, for Modern No. 2 he uses warm-hued washi paper (traditional rice paper) which, judging from the trailer, are sometimes painted boldly in green and black.

Mizue goes on to explain how he collaborated with twoth for the music. He felt that Modern had a slower rhythm, so for Modern No. 2 he told twoth that he wanted to increase the tempo. This surprised the interviewer at the Venice Film Festival, who found even the first Modern remarkably fast.
As Mizue uses graph paper to plan his designs, in order to reduce the rhythm, he used just one square – and to make the movement quicker, the line uses 2 or 3 squares. As a result, he found that the speed of No. 1 was quite even, but that No. 2 has many variations – some of which he described as “bounces”. In conclusion, Mizue said that he believes that animation must not necessarily tell a story, but to amuse and make people feel good.
MODERN No.2   4'10"/color/DCP/16 : 9/stereo/Japan/2011