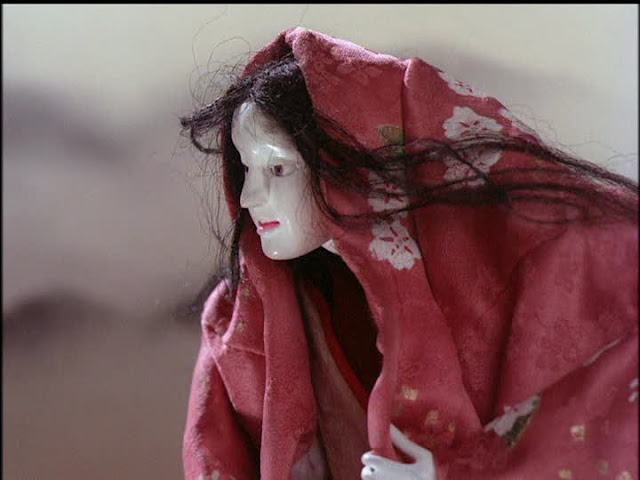 The Buddhist temple of Dōjō in Hidakagawa, Wakayama Prefecture is home to many National Treasures (国宝/kokuhō) and Important Cultural Properties (重要文化財/jūyō bunkazai). These include scrolls from the Muromachi period (c.1336-1573) called the Dōjō-ji Engi Emaki (紙本著色道成寺縁起) which depict the story of the lady Kiyohime and the monk Anchin. The story of this ill-fated pair has been told and retold for centuries.
Most English reviews of Kihachirō Kawamoto’s award-winning puppet animation Dōjōji (道成寺, 1976), describe it as a retelling of the 19th century Kabuki play Musume Dōjōji (The Maiden of Dojo Temple) which is still quite popular today. The Kabuki and Bunraku versions of the story were adapted from the Noh play Dōjōji (Dojo Temple) which dates back to the 14th century. The earliest known version of the tale is believed to date back as far as the 11th century (Donald Keene, Twenty Plays of the Nō Theatre, p. 238).
While Kon Ichikawa’s lost (and recently recovered) puppet adaptation of Musume Dōjōji (The Girl at Dojo Temple / 娘道成寺, 1945) is definitely an adaptation of the Kabuki version – complete with Kiyohime’s dance – I believe that Kawamoto’s adaptation is actually drawn from the much more sinister Noh version.  The main plot points, thematic concerns and even the title all point to the Noh drama as being his main source of inspiration.  He has also clearly drawn on the ancient depictions of the tale of Kiyohime as inspiration for the design of his sets and puppets.

Anchin and his elderly mentor are on their yearly pilgrimage to Kumano. Along the way, they take shelter in the home of Kiyohime. She falls in love with Anchin and tries to seduce him, but he resists her. He uses his devotion to Buddha as his excuse for not falling for her charms. She begs and pleads with him, but to no avail. When she discovers that Anchin and his companion have left, she chases after him barefoot like a wild woman, paying no heed to her bleeding feet. When she finally catches up with Anchin, he no longer sees her human form but sees her as an oni (demon).
Anchin crosses the Hidaka River in his effort to escape Kiyohime and begs the boatman to help him. When Kiyohime arrives at the river, the boatman refuses to help her cross. Undeterred, she flings herself into the water in desperation and transforms into a serpent as she swims across. Meanwhile, Anchin reaches the Dōjō Temple and asks the priests there for assistance. They hide him under the giant bell. When Kiyohime, in the form of a serpent arrives, she wraps herself around the bell and burns him alive. She then returns to her human form and throws herself into the river. When the priests raise the bell, all that remains of Anchin is his skeleton with his Buddhist prayer beads unscathed still clutched in prayer in his hands. The priests begin to pray and a breeze filled with cherry blossoms blows the skeleton into dust.
The “woman as temptress” is an age old motif in mythology from around the world, included by Joseph Campbell in The Hero with a Thousand Faces (pp. 101-5) in his elucidation of the monomyth. While the feminist in me recoils from this depiction of a wrathful woman – I am reminded by the famous line by William Congreve "Heaven has no rage like love to hatred turned, Nor hell a fury like a woman scorned." (The Mourning Bride, 1697, III.viii) – the pragmatist in me recognizes that the woman is functioning as metaphor for the temptations of life. Anchin is on a spiritual journey, like Campbell’s hero-knight figure, and Kiyohime represents the obstacles that life throws in the way of his journey.

In his animated films, Kawamoto was interested in depicting the Buddhist concepts of the hardship and suffering of human life. It was actually during the making of Dōjōji that the composer Teizō Matsumura (松村禎三, 1929-2007) gave him the complete works of Shinobu Orikuchi (折口信夫, 1887-1953) (Animation Meister interview). It was Orikuchi’s story The Book of the Dead which was to result Kawamoto’s last masterpiece, which I consider one of the most beautiful expressions of Buddhist philosophy on film.
Stylistically, Dōjōji is also a masterpiece of puppet animation. The puppets have been masterfully carved and dressed, and the sets meticulously painted. The colours and seasonal elements (spring flowers like sakura and forsynthia) have all been carefully chosen according to traditional Japanese customs. As I mentioned in my review of The Demon (Oni, 1972), the unusual mixture of 2D (watercolour backgrounds) and 3D objects (the puppets, the Bodhisattva statuette) was achieved by the use of horizontal sets shot from above with sheets of glass used to add layers to the image. Many of the scenes resemble Yamato-e paintings in the way in which set elements are places in the set. Some of the most technically stunning scenes in the film for me are the depiction of the moving waves when Kiyohime transforms into the serpent and the scene when the serpent wraps herself around the bell.
Dōjōji won Kihachirō Kawamoto much acclaim including the Émile Renault Prize and Audience Prize at Annecy in 1976. He then went on to win his third Noburo Ofuji Award for innovation in animation at the Mainichi Film Awards.

This film is available with purchase with English subtitles from cdjapan:

Or from the U.S.:
Credits