Subs vs. Dubs: Part One 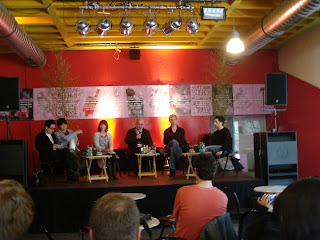 The official title of this year’s Podium Discussion at Nippon Connection was “Lost in Translation? Japanese Film: Translation vs. Localisation.“ A very distinguished title, indeed, but I think if you asked most participants what is was about, the answer would be: “Subs vs. Dubs.” 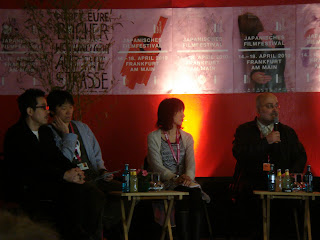 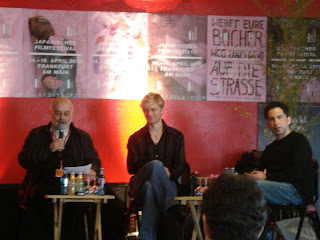 Dr. Roland Domenig, Crispin Freeman, Michael Arias
This is a write up of notes that I took by hand during the discussion, so it is not a transcript of the proceedings but a paraphrasing of what the participants said during the panel. I will indicate my own thoughts and comments by putting them in [square brackets].
Dr. Domenig opened the discussion by asking the panel to share their opinions on the topic of Subs vs. Dubs. Michael Arias said that dubbing, particularly for animated films, is less distracting, however on the down side one loses the original performance. He added that the decision really rests upon the target market. He cited Miyazaki films as an example, saying that the audience doesn’t want to be distracted by subtitles. Young audiences, of course, need dubs, and it is fortunate that DVDs allow for both subs and dubs so that the audience to allow for more flexibility.
Nami Asakawa felt that cost and time were the key issues. After this, there are times when the producer and director want to preserve the ‘localisation’ of the film. In this case, subs are used so that the original flavour of the film does not get lost. The type of film is also taken into consideration when deciding whether or not to release the film cinematically with subs or dubs.
Michael Arias added that in contrast to American animation practice, where the voices are recorded before the animation is completed, dubbing does not put any constraints on the Japanese animator because they record the voices in post-production. A well done dub can improve the experience for the audience. Everything’s a compromise in filmmaking. You never get exactly what you want. Arias also said that he feels that a viewer must shift into a different state when reading subs. Although he was loathe to say so, he admitted that he even thinks a poor quality dub can be effective.
[I found Arias’s contention that one must shift into a different state when reading subs very interesting, because that is not my own personal experience. As I have always been a quick reader, I barely even notice the subtitles except when they contain spelling mistakes or inaccurate translations. The only time I find reading subtitles laborious is when they are not in English – ie German or French, because I sometimes have to pause and run for my dictionary. I cannot stand watching films that are dubbed because I like to hear the nuances of the original performance. Even when it is a language that I do not understand, I feel that language imparts so many subtle things that make the performance unique.  On the other hand, I know people who won't even give subtitled films a chance and will just change the channel.]
Tomorowo Taguchi said that he agreed largely with the points that Asakawa had made about the reasons filmmakers choose subtitles or dubbing for their films. It really depends upon the film itself. Dubs and subs sometimes involve the translator’s different interpretation of a scene, but on the whole he enjoys the process.
For Part Two Click Here