Last year’s hotly anticipated sequel, Nana 2 (Kentaro Otani, 2006) fell flat at the box office and was widely panned by critics and fans alike. These reasons explain why I kept putting off seeing it until very recently. To my relief, watching the film wasn’t a total waste of time. In fact, the film wasn’t nearly as bad as I had anticipated.

Let me start off by pointing out the flaws so that I can end up on a more positive note. The two main reasons why this film was such a flop at the box office were the failure of the producers to secure the same cast members as in the original adaptation Nana (Kentaro Otani, 2005) and trying to fit too much of the original manga storyline into the film.

The studio no doubt rushed into the production of the sequel in order to cash in on Ai Yazawa franchise during the height of the added success of the 2006-7 anime series Nana directed by Morio Asaka. The online rumour mill has it that in their zeal, the producers announced that all the cast members would be returning before they actually had signatures on paper. This lack of etiquette meant that they weren’t able to get Aoi Miyazaki to reprise the role of Nana Komatsu (aka Hachi-ko).

In my opinion, the production of the sequel should not have gone ahead without first securing the two lead actresses. I’m guessing that the producers thought that Mika Nakashima, a big pop star outside of the Nana franchise, was their main box office draw, but the two Nanas are equally as important as the emotional centre of the narrative. As fans had already fallen in love with round-faced, moon-shaped eyed, super-kawaii Aoi Miyazaki as Hachi-ko, poor Yui Ichikawa really a big task in trying to win over the fans. In Ichikawa’s defense, I think she did a fine acting job, but she didn’t resemble Miyazaki enough to satisfy fans of the first film.

Interestingly, the actor for Ren was also switched (from Ryuhei Matsuda to Nobuo Kyou) as was the actor playing Shin (from Kenichi Matsuyama to Hongo Kanata), but so far I have found no big complaints about this, apart from minor gumblings. I think if they’d kept Aoi Miyazaki, the fans could have accepted these other minor cast changes. With all the romantic subplots of the Nana series (Hachi & Shouji, Shouji & Sachiko, Nana & Ren, Junko & Kyosuke, Shin & Leila, Hachi & Takumi, Hachi & Nobu, Takumi & Leila, Yasu & Leila, Nana & Yasu, ad infinitum), the relationship between the two Nanas is the most crucial, and the audience needs to love them both for the weepie scenes to succeed.

Which lead me to the problems with the screenplay. Otani, and screenwriter Taeko Asano, were faced with a difficult task. A long running manga series like Nana always lends itself better to adaptation to a TV series, which explains, in part, the success of the anime adaptation. Nana offers up the added dilemma that it has such a large cast of characters and so many subplots. In order for a feature film adaptation to be successful, the adapter needs to know what to keep and what to leave on the cutting room floor. I think that Otani and Asano tried to balance this with trying to fit many details in so as not to disappoint the fans. Unfortunately, the plot ended up becoming too unwieldy. As a fan of the manga, I was hoping that more screen time would be given to the Shin and Leila storyline. As a film critic, I thought that they should have focused on the Hachi and Nana relationship, even if that meant sacrificing much beloved scenes.

For Nana 3 (you know it is inevitable), they should hire Koki Mitani to shoot it in the way he did The Uchoten Hotel. It would win back audiences and make a film more worthy of its subject matter. For the time being, we can only wait with bated breath for Ai Yazawa to publish enough new material so that the anime artists can get back to their drawing boards as soon as possible [aside: new manga material in January 2008 issue of Cookie!!]

I have mentioned a great deal of criticism throughout this review, but I promised to end on a positive note, so here it goes. For a shoujo melodrama, this is actually not such a bad film. It may not sweep audiences away like the first film did, but there is a lot more heartbreak and difficult decisions in this film. For a coming-of-age story it deals with a many tough issues and it doesn’t offer any easy solutions. It may not win any awards for film of the year, but for a film aimed at teenaged girls, it is a lot better than a lot of the Disney schlock being thrown their way. At the very least, it is worth watching for the fabulous performances by Mika Nakashima as Nana and Yuna Ito as Leila.
[p.s. I know that most bloggers write "Reira" which is the romanization of the katakana name, but in the manga, it is written 'Leila' when romanized.] Here is a video of Ito's song from the film: 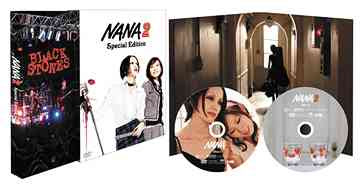