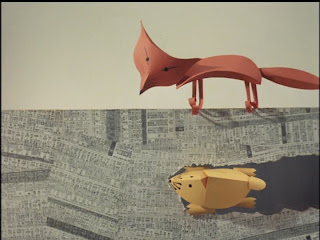 Home, My Home (1970) was the first work of Tadanari Okamoto’s that I ever encountered. I arrived in Tokyo with my family in late 2004 – a few months too late for the National Film Center exhibition and retrospective of his career. Luckily for me, however, the paper sets and dolls from Home, My Home had been donated to the permanent collection at the NFC and were on display the first time I visited the museum.
Okamoto was famous for his constant innovations with animation techniques. Paper cutouts had been a popular medium in early Japanese animation. Cutout animation was cheaper and more time efficient than cel animation, so animators like Noburo Ofuji (1900-61) were fond of using this method. Cutouts also fit well with Japanese traditional paper traditions and patterned paper like chiyogami gave early films like The Village Festival (1931) a distinctive look. In this animated educational short for children, Okamoto takes the art of paper cutouts to another level by playing with depth of frame.  He preferred using an animation table which allowed him to add layers of depth on glass surfaces.
The film tells the story of a fox and a mole who are walking along and dreaming about their ideal home. The story is told by song – a popular format for children’s films in Japan. The catchy and amusing “Mogura to Kitsune to Akasakana” was composed by Seiji Yokoyama with lyrics by Yoshiko Kōyama. It is a duet between and male and a female with Kazuo Kumakura singing the story of the mole and Yoshiko Mari singing the story of the fox.

Tadanari Okamoto Sakuhin Shu Vol.1
Home, My Home appears on this DVD
The characters walk from screen right to screen left with the fox above ground and the mole digging along underground directly under the fox. The ground is a collage of the real estate pages of the newspaper. The characters and the sets are made of craft paper folded into three dimensional shapes. The puppets were made by Sumiko Hosada, a longtime Echo (Okamoto's animation studio) employee who has also made puppets for Kihachirō Kawamoto.
The dreams of the fox and the mole are indicated by the placement of a circle of coloured dots in the foreground of the image, creating a kind of blurry picture frame. They dream  of cute Western-style houses with a wife, son, and daughter living in comfortable middle class homes with Western-style kitchen, living room, bedroom, and a modern Japanese-style bathroom.
The mole suddenly sneezes, which startles the fox above and causes him to fall down. This triggers their dreams to turn dark and they envision the destruction of their dream homes with a dump truck crashing into the fox’s house and a military jet knocking into the mole’s house. The family homes are then carted off by construction vehicles and replaced by modern raised highways and industrial buildings. The sequence ends with a kind of black smog blotting out the screen. The fox and the mole turn around and walk in the other direction and wonder if they need to move to outer space.
The first time that I saw this film, I interpreted it as having an environmental message about the destruction of animal habitats à la Pom Poko

(Isao Takahata, 1994). Then I realied that the dreams that the fox and the mole have are not for animal dwellings but for idealized human homes. This suggests the film is really about deep-seated human fears about the effect that encroaching industrialization will have on their quality of life.
The design and execution of this animation is really top notch. The animation was executed by Hiroshi Tabata and Fumiko Magari. Two of the crew on this film, Sumiko Hosada (保坂純子) and Fumiko Magari (真賀里文子), are currently teaching puppet design and puppet animation at the Laputa Art Animation School.  Home, My Home and The Flower and the Mole (花ともぐら/Hana to Mogura, 1970) jointly won the Noburo Ofuji Award in 1971.