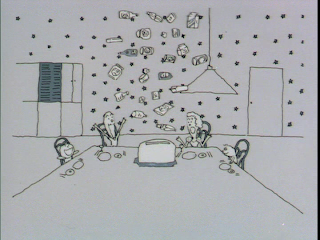 It is amazing to think that Taku Furukawa’s award-winning animated short Speed (1980) is just over 30 years old because the style and the message seem just as fresh and relevant today as they did then. Our “high speed society,” as the opening title card calls it, has only gotten faster and more frenetic in the intervening years.

Using his trademark sketchy, casually rendered illustration style, Furukawa depicts the various methods humankind has used over the centuries to do things more quickly and conveniently. Furukawa’s minimalist drawing style has much in common with the New Yorker illustrations of Saul Steinberg (1914-1999) or Ed Arno (1916-2008).

In the first section of the film, a man and a monkey sit at the foot of a tall, fruit bearing tree. The man shakes the tree in order to get the fruit. In order to obtain more, he climbs the tree. The monkey seems shocked by the man’s aggressiveness. The man does not share with the monkey. In fact, in his greed to have the last fruit on the tree he disregards his own safety and causes the branch to break. He falls with it to the ground. This scene is followed by a number of comical short vignettes which depict man trying to master skills such as starting a fire, fishing, making wine, and so on.

In the climactic point of this sequence, the man blasts off into outer space with the rocket ship landing in the eye of the moon in a visual reference to Georges Méliès’s pioneering film A Trip to the Moon (Le voyage dans la lune, 1902). Coloured shapes burst like confetti from the mouth of the moon and the sequence of events appears backwards at an accelerated speed with a black background replacing the white and neon-bright coloured lines replacing the black lines (see comparison above).
Once the images are back at the beginning of the story, Furukawa reverts to the original black on white style and a new story of mankind’s advancing progess takes place this time with an emphasis on art and design. The third section of the film takes advances in transportation over the centuries as its theme. If Furukawa were making the film today, I could imagine him doing a fourth section with the theme of communication.

In the wake of the disaster at Fukushima, it would seem that we need to heed Furukawa’s warning more than ever: faster does not necessarily mean better, and perhaps we need to slow down and appreciate the world in its natural state and be respectful of the other living things that we share this planet with. Although it may have a serious message at its heart, the message is related with Furukawa’s characteristic sense of humour.

Speed appears on the Anido DVD Takun Films. Please support this artist by purchasing his work.