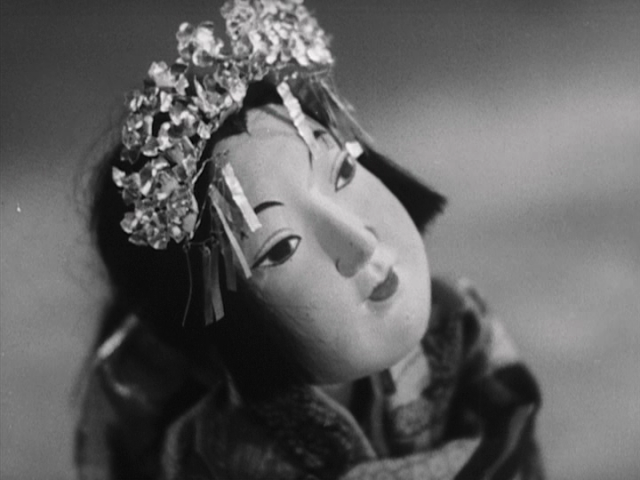 Kon Ichikawa (市川 崑, 1915-2008) had a long and varied career, attaining great acclaim as the director of such classics as The Burmese Harp

(1965). At heart, however, Ichikawa considered himself a cartoonist, telling Donald Richie

that after Charlie Chaplin, the biggest influence on his films was Walt Disney. 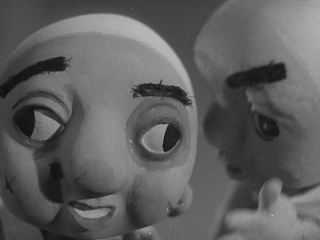 Many of the films that Kon Ichikawa worked on as an animator and assistant director at J.O. Studios and later Toho were considered lost for over half a decade. When Cinematheque Ontario published their book

honouring the career of Kon Ichikawa in 2001, Ichikawa’s puppet film The Girl at Dojo Temple (Musume Dojoji, 1945) was considered unquestionably lost. In an interview with Yuki Mori, Ichikawa admitted that he had no idea what had happened to the film, though he had kept his original screenplay and storyboards. 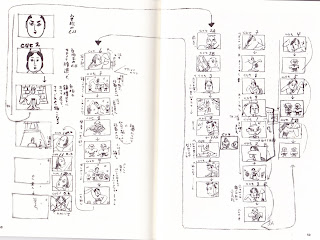 Ichikawa began Musume Dōjōji several months before the end of the war. It was one of several puppet projects intended for an international audience. As puppet films were not considered of very high stature, Toho allowed assistant directors like Ichikawa and Tatsuma (Tacchan) Asano a chance to direct. They were free to choose their own material. Ichikawa began adapting the story Hana by Ryunokuke Akutagawa

(whose stories had been the basis of Kurosawa’s Rashomon

), but changed his mind and decided to tackle the classical kabuki play Musume Dōjōji instead because he felt he could use it to convey the beauty of Japanese culture.

Originally, Ichikawa intended the film to be a stop motion animation. It is unclear if it was financial or time constraints that led to the film being shot with live action marionettes instead of stop motion. One short sequence in the film, the cracking of the bell, uses animation techniques to depict the explosion.


The script was co-written by Ichikawa’s friend and long time collaborator Keiji Hasebe, who worked on dozens of Ichikawa films including Kokoro

(1964) with Shohei Imamura. The studio arranged for some of the greatest performers of the day to participate including traditional puppet master Yuki Magozaburo, singer Ishiro Yoshimura, and shamisen player Kisaburo Okayasu. The music was composed by the great Tadashi Hattori (1908-2008) who composed the scores of films like Akira Kurosawa’s No Regrets for Our Youth 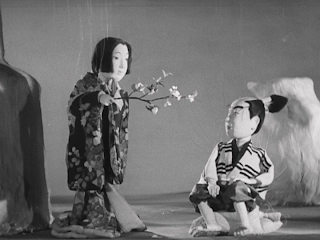 Use of cherry blossoms as a seasonal and metaphorical motif.


Although the film was completed before the war’s end, it fell victim to bad timing. The war finished before the film could be released. The censoring arm of the American Occupation’s GHQ (General Headquarters) required film scripts to acquire censorship approval before shooting. As Ichikawa’s film had already been shot, it was refused permission to publically screen. Ichikawa’s film also had a strike against it because it used Japanese traditional culture as its source material. Because Japanese traditional culture had been used extensively in Japanese war propaganda, the Americans suppressed any depiction of feudal Japan at the movies in favour of more contemporary tales.

In the intervening decades, it was believed that the film was confiscated by the GHQ censors, but I have a feeling that the truth was much more mundane. I am still tracking down information concerning the circumstances of the film’s recent rediscovery. I have a feeling that the film was simply shelved and forgotten about at Toho. In 2008, Kadogawa Pictures rectified the years of neglect by finally releasing Musume Dōjōji to the general public. It appears on the DVD Style of Kon Ichikawa: Art + CM + Animation alongside Shinsetsu Kachi Kachi Yama (Ichikawa’s directorial debut), dozens of commercials that Ichikawa directed throughout his career, and a poetic documentary Ichikawa made about Kyoto. 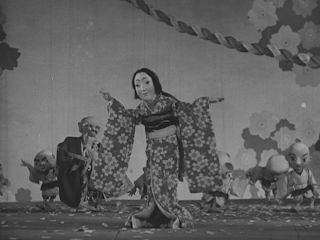 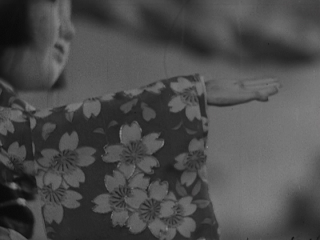 The puppet movement in the film is graceful and expressive.

The original kabuki tale Musume Dōjōji is one of the most famous dance-dramas of the genre. In this ancient legend, the young woman Kiyohime performs a series of dances that follow her character arc from innocence, through frustration, into her final transformation as a vengeful serpent/demon. The tale has many variants. Kihachirō Kawamoto faithfully adapted, in all its horror, the most common version as a puppet animation in Dojoji Temple

(Dōjōji, 1979). In this version, Anchin is monk who is making a pilgrimage. The young maiden, Kiyohime, encounters him and immediately falls in love with him, but Anchin resists her charms. She transforms herself into a serpent and chases after him. Anchin seeks refuge at the temple of Dōjō where the monks hide him under their great bell. Kiyohime as the serpent/demon wraps herself around the great bell and with her fire heats the bell. When the monks finally lift the bell, Anchin has been burnt to a crisp. 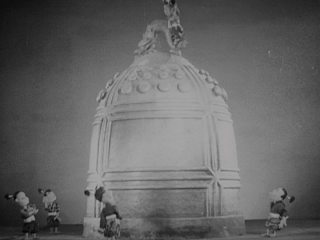 The only evidence of the serpent motif in this adaptation
is the adornment at the top of the bell.

In an interview with Yuki Mori,

Ichikawa said that rather than just relaying the original story of Anchin and Kiyohime, he “wanted a more abstract and creative story of a young bell maker and a princess who helps him.” Ichikawa also takes a much more sympathetic view of Kiyohime transforming her from a vengeful female figure into one who is self-sacrificing. In this tale, Kiyohime becomes the central figure, with her dance becoming the climax of the film.


In Ichikawa’s adaptation Anchin is the mason making the bell. The other monks are hard at work sweeping the cherry blossom leaves and Anchin’s workers are toiling over the bell’s construction. Kiyohime peers around the edge of the bell and spots Anchin and falls in love, but he is too concerned with his work to pay her any notice. Then, disaster strikes, and the bell suddenly cracks and falls into pieces. Anchin is devastated and falls into despair. Kiyohime begins to pray to a large statue of a Bodhisattva (ボーディ・サットヴァ or 菩薩 / bosatsu). As Kiyohime prays long into the night, the moon rises symbolically behind the head of the Bodhisattva. The moon is used often as a symbol in Buddhist art as it represents the Buddha’s knowledge and virtue and symbolizes the aspirations of sentient beings to attain Buddhahood. 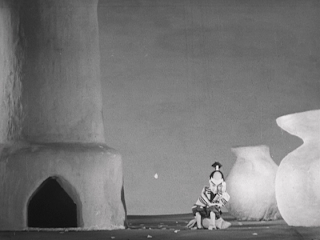 Repetition of framing as a storytelling device. 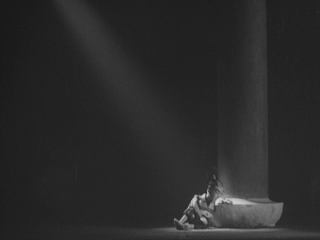 The light of the moon falls upon Anchin and he races to his kiln which is firing on its own, until suddenly his great bell, with the figure of a serpent at its top stands completed before him. He approaches Kiyohime, who is still in prayer at the foot of the Bodhisattva, but when he reaches out to touch her she falls to the ground lifeless. Kiyohime has sacrificed her own life in order to restore the bell to the temple. At the next falling of the cherry blossom leaves, the spirit of Kiyohime reappears at the foot of the Bodhisattva and she begins to dance in celebration of the bell. Her dance, accompanied by the strains of a shamisen, is so captivating that the monks join in with her. When her climactic dance draws to a close, the image of her waving is superposed with a shot of the bell spinning wildly. The film ends with an image of Anchin looking up (to the moon/to the bell?) reverentially. 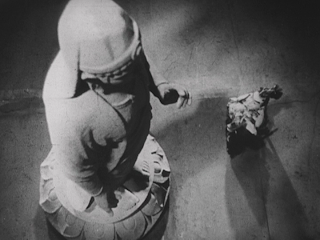 Use of extreme angles for dramatic effect


Ichikawa’s skill as a director is already apparent in this film. He uses a wide variety of camera distances, often contrasting long shots with close ups. He also maintains visual interest through camera movement and editing. For such a short film, quite a large number of edits are employed, especially in contrast with many filmmakers of the day. Ichikawa also uses light and shade in a very expressive manner. Although the film concerns itself with a narrative exposition, dialogue is used only sparingly and conveyed via jōruri narration and song. The story may belong to a traditional theatrical tradition, but Ichikawa’s adaptation of the story is purely cinematic. 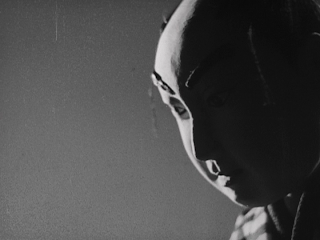 Poetic use of light and shade...
not to mention silhouette 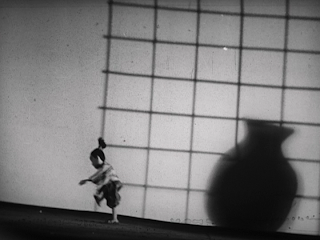 The war coming to a close effectively ended Ichikawa’s career as an animator / puppet filmmaker. He had actually started shooting a second puppet film in the months leading up to the end of the war called I Became a Cat, But. . . (Neko niwa natte mitakeredo). While the title may sound similar to the satirical novel by Natsume Soseke I am a Cat

(Wagahai wa neko de aru), which Kon Ichikawa adapted into a film in 1975, it was actually an original story in which a mouse transforms into a cat. When Japan lost the war, the film got shelved.  It is fascinating to speculate how different the history of puppet animation in Japan would have been if Ichikawa had been able to continue in this genre.

Script
Kon Ichikawa & Keiji Hasebe
(based on a classical story)