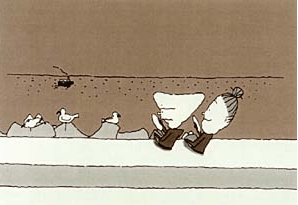 Japan-Woche Mainz 2010 gave me the opportunity to watch Taku Furukawa’s Tyo Story (Jyōkyō Monogatari, 1999) for the second time. I first saw it at Nippon Connection in 2008, but as it does not appear on Takun Films, Anido’s DVD of Furukawa’s collected works (1968-1990), one has to rely on festival screenings to see it again.


‘Jyōkyō’ means ‘to go to Tokyo’ and Jyōkyō Monogatari is an animated adaptation of Yasujiro Ozu’s famous Tōkyō Monogatari (Tokyo Story, 1953).   I suspect the English title "Tyo Story" is a play on Toy Story (1995).  John Lasseter was a guest at Hiroshima 1987, and is known to be a huge fan of Japanese animation - and Taku Furukawa is famous for his playful attitude towards animation.

Furukawa employs his familiar doodling style drawn animation, which is influenced by the style of his mentor in the 1960s Yōji Kuri and the New Yorker caricaturist Saul Steinberg, to depict an older couple on the train to Tokyo to visit their children. In addition to being a humorous take on an Ozu story, Furukawa also gives a nod to silent film comedies, but using a rollicking score similar to that played during silent movies and using bilingual (Japanese / English) title cards to impart story information.

During the train ride, Furukawa gives us the back story of the family through the techniques of flashback and montage. The father looks at the wedding photo of his daughter, which triggers a photo montage of her life from birth through to the present. The same is repeated with the couple’s son. The memories are bitter sweet, and Furukawa employs visual gags to elicit laughter from the audience.


Once in Tokyo, the story follows its expected path with the parents finding, as they did in Tokyo Story, that their children’s lives are too busy to fit any quality time in with their parents. The modern distraction is of course the keitai denwa (cell phone). There is an amusing sequence in which every time a keitai goes off, the character whose phone it is buzzes just like their phone. Other modern touches include the grandsons playing violent computer games and ignoring their grandparents, and instead of making a home cooked meal their daughter-in-law orders in pizza.

Tokyo is shown to be a much noisier place than the seaside town where the couple live. The noise culprits include traffic, people, crows, and even a noisy jidouhanbaiki (vending machine) that calls out ‘arigatou gozaimasu’ after every transaction. For a laugh, Furukawa even has the Roadrunner call out ‘meep meep’ before being chased along the overpass by Wile E. Coyote.  Just as in Tokyo Story, the grandparents eventually are left to fend for themselves going on a tour of Tokyo. But then being modern grandparents they also go bowling, rock it out at a Rolling Stones concert (Furukawa’s exaggerated caricatures of Keith Richards and Mick Jagger are particularly amusing), and go to Tokyo Disneyland.


On the surface, Furukawa’s film appears to be a tongue-in-cheek critique of the superficiality of modern urban lifestyles. Yet, unlike Tokyo Story, the story has a surprise twist at the end which is very amusing.

Japan-Woche Mainz 2010 is also screening Furukawa's recent work Paper Film (image above) on Wednesday evening, but unfortunately  I will not be able to attend due to scheduling conflicts.


Taku Furukawa (古川タク, b. 1941) is one of the best known independent animators in Japan and has worked as an experimental animator, teacher, and mentor for over 40 years. His films range from an intricate tribute to the 19th century animation device the Phenakistiscope to early computer animations on the Mac, to humorous narrative shorts like his contribution to Tokyo Loop in 2006. Over the years he has contributed numerous animated shorts to the NHK’s Minna no Uta series. He won the Special Grand Jury Prize at Annecy in 1975 for Odorokiban and his manga The Takun Humor won the Bungeishunjū Manga Award for 1978. He lectures regularly at universities and art schools.