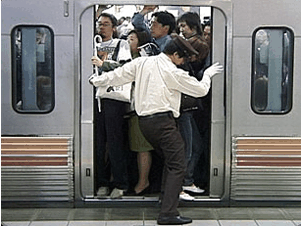 Last night at Japan-Woche Mainz 2010, I also enjoyed the short On a Wednesday Night in Tokyo (2004) by German filmmaker Jan Verbeek. The film documents the open doorway of a crowded train at Shibuya Station. During the five and a half minutes of the film, more and more people gently push their way on board the already impossibly full train. Most of the people have passively disinterested expressions on their face. Watching this with a German audience was a particularly enjoyable experience because people gasped with astonishment as more and more people appeared and push their way on board. Packing a train like sardines into a tin is commonplace during the morning and evening rush hours in Japan, but not as extreme here in Europe.
In order to intensify the experience, Verbeek switches from the sound of the station platform to the sound of flies and then to a synthesizer soundtrack. I found that the music heightened the anticipation of seeing just how many people could possibly fit onto the train before it departed. As the train nears its capacity, Verbeek moves the camera closer to the people and captures for the first time a break in the impassive faces: a woman grimaces with discomfort as a man presses into her. Finally, one of the white-gloved station staff appears to help cram the people into the train car so that the doors can close. He is joined by some other assistants and they push the people and tug at the doors until the train is ready to depart. The audience laughed at the sight of the young uniformed men saluting at the train left the station…. another sight one does not see here in Germany.
This documentary short was beautifully conceived and shot. I imagine that Verbeek chose the evening to shoot because in the morning the platforms are so crowded that he would not have been able to have such a clear shot of the doors. I wonder if he managed to do it all in one take or if he shot several sequences and then chose the best one of the lot. One effect that I found particularly fascinating was when the people walking by on the platform appeared to be superimposed. I’m not sure what technique Verbeek used to do this, because the people in the background stayed the same, but it looked great and contributed well to the general atmosphere of the film. It was also a nice touch that when the train left the station, the hiragana station identification sign was in frame so that the audience could identify the location where it was filmed. The film captures the essence of this moment in a Japanese commuter’s life with an artful documentarist’s eye.
If you are interested in seeing this film, the artist has kindly uploaded the video onto his website here.
Other great documentaries about Tokyo:

Tokyo-Ga [Digitally Remastered Edition]
Click above to order Wim Wender's Tokyo Ga from cdjapan, or here to order it as an extra on Criterion's Late Spring Collection

from cdjapan, or here from the the States