Last Friday night at Shinsedai, I had the great pleasure of watching Kenji Mizoguchi

’s The Water Magician (aka Cascading White Threads, Taki no Shiraito, 1933) with live accompaniment by the experimental pop band Vowls.
The Water Magician is one of a handful of Mizoguchi’s surviving silent feature films. It is a significant film historically, for it was at a screening of the film in 1972 that Midori Sawato (澤登 翠) first heard the benshi Shunsui Matsuda (松田春翠, 1925-1987) perform. Sawato became his pupil and has worked diligently ever since to keep the benshi (silent film narrator) tradition alive in Japan. The film that was projected at Shinsedai is one that Matsuda Films helped preserve and is available through Digital Meme.
The Digital Meme DVD includes the choice of two benshi performances with English subtitles. For this performance, there was no benshi, only the subtitles and the emotion and narrative tension were supplied by the musical performance.
The video transfer of The Water Magician runs quite quickly as it was not shot in 24 fps. Silent films were shot at variable speeds of between 16-23 seconds and it is likely that The Water Magician screened at 2 hours originally instead of its current 90 minutes. The Japanese title cards flashed by at a speed too fast to read, but a Japanese audience would rely more heavily on the benshi narration than the title cards for plot information.
The Water Magician tells the story of a 24 year old woman who makes a living performing a water act as part of a travelling ensemble which includes a knife thrower and other amusements. Her age is significant for in Japan it was a commonly held belief that if a woman were not married by the age of 25 she would be considered an old maid or, as it is known colloquially, “Christmas Cake”. Taki no Shiraito is considered the most beautiful woman in the region, but she dreams of one day marrying and having a family. 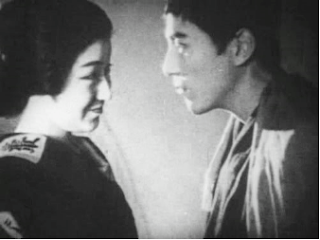 Fate throws into Shiraito’s path a young coachman by the name of Kinya Murakoshi. Kin-san is only a year older than Shiraito, and has endured much tragedy in his life. When Shiraito hears his story of losing both of his parents and having to quit school in order to earn a meager living, she offers to pay for his education. In return, he promises her that when he has become a great man, of who his samurai family would be proud he will return to make her dream come true.  Fate again intervenes, this time with tragic consequences.
Even at this early stage of his career, Mizoguchi already demonstrates a keen eye for poetic framing. The scenes of Shiraito on the bridge in the moonlight, the key metaphor of the film, are so beautifully rendered that one could image each still framed on the wall of a gallery. The emotion of the film is carried on the faces of Shiraito and Kin-san. For a silent film, it does rely quite heavily on the benshi perfomance, which meant a lot of reading at this screening.

Before the performance, I asked Naomi Hocura of Vowls (limited edition 7" available via website) about how they prepared the accompanying music. Brandon Hocura had composed some themes specifically for the film, and they had cues marked for certain moments when sound effects or particular emotions needed to be brought to the fore. Apart from this skeletal framework, their performance was mainly improvisational. The group played a wide variety of instruments including electric guitar, keyboards, harmonium, drum and a wide variety of other percussive instruments. One of the more innovative effects, used to emphasize the water theme, was a PET bottle half-filled with water with a mic taped to it. During some of the more lyrical passages, Naomi Hocura also sang in a wordless, haunting way that reminded me of Loreena McKennitt.

The music complemented the film and for me emphasized the sensuality of the film --- Takako Irie's performance as Taki no Shiraito in particular. The entire audience seemed mesmerized by the performance which I hope becomes a regular feature at Shinsedai Cinema Festival – the music truly made the silent film very relevant for a young generation of spectators. One sign that the music was effective was the amount of weeping in the audience during the final scenes of the film.
Directed by Kenji Mizoguchi
Written by Kyōka Izumi
Cinematography by Minoru Miki
Starring
Takako Irie as Taki no Shiraito (aka Tomo Mizushima)
Tokihiko Okada as Kinya Murakoshi
Bontarō Miake as Shinzo
Suzuko Taki as Nadeshiko
Ichirō Sugai as Gozo Iwabuchi