Yasunobu Takahashi’s debut feature film Locked Out (ロックアウト, 2009) tells two parallel stories that the hands of fate bring together in the parking lot of a supermarket.
Kiichi Sonobe (Sodom the Killer

) stars as Hiroshi, an apparently down-and-out young man driving directionlessly into an uncertain future. Hiroshi is clearly haunted by an event in his recent past, but exactly what has happened to him is not made clear initially. The psychological trauma that he is experiencing reveals itself in dramatic dream sequences triggered by the smallest of incidents. For example, perceived impoliteness by a waiter in a diner sets off a Reservoir Dogs

-like dream sequence in which Hiroshi plays a violent starring role. 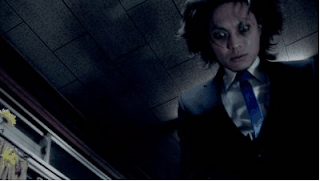 ), are on an expedition to the supermarket. In a typical mother-son scene, Keita begs his mother to buy him a set of cards for him to trade with his friends, but his mother refuses. When Shoko has to run back into the store to purchase an item that she had forgotten, young Keita sneaks out of the family car to steal the cards he so desired. Upon his return to the parking lot, he mistakenly climbs into Hiroshi’s car and thus begins an unlikely friendship between the scared young boy and the depressed young man.

The narrative paths of Keita and Hiroshi collide..
Using fairly straightforward narrative and cinematic techniques, director Yasunobu Takahashi leads his audience into presuming the worst of Hiroshi, just as Keita’s mother and the police officer presume the worst when they see the minor cut on Keita’s face together with Hiroshi’s disheveled appearance. As the story inexorably unravels itself, we learn that appearances often belie the complicated realities beneath the surface.


At the centre of Locked Out is a well-told story supported by stellar acting performances and capable cinematography by Testuya Takahashi (Marriage Ring). For a cast and crew with relatively little experience, they managed to pull off a very professionally shot and edited film that manages to avoid the usual pitfalls of a first time film.

Scene-stealing young actor Takeru Shimada as Keita
I spoke with Yasunobu Takahashi at Shinsedai Cinema Festival and learned that he was not a cinéphile as a kid but rather that filmmaking was something that he discovered as a passion as an adult. In the mid-1990s he travelled to California in order to improve his English, and rather than take ESL classes decided to take a film production course instead. The moment he held a camera in his hand, he was seduced by the art of cinematography.
Since that time, he has honed his skills making short films (see filmography below) and started his own independent production company On the road films. Takahashi writes, directs, and produces his own films because he enjoys having control of all stages of production. He is currently in the process of writing his next feature film. His filmmaking process begins with writing, as for Takahashi the essential element of a good film is the story and the characters. How he directs his films grows out of the human drama at the core of the film.
I was impressed with Takahashi’s passion for filmmaking and hope to see some of his short films in order to get a better idea of how he has developed as a film director. Someone with such enthusiasm and dedication to his craft is definitely one to watch in the future. I applaud Shinsedai Cinema Festival, and also Raindance and  Nippon Connection where Locked Out played in 2009, for supporting young, upcoming talent like Yasunobu Takahashi.