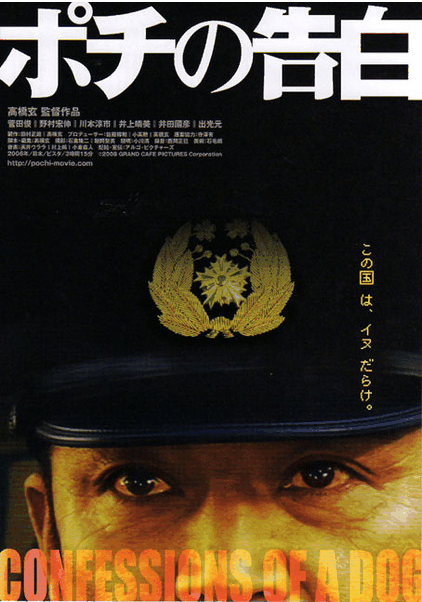 One of the most important films screened at Toronto’s Shinsedai Cinema Festival this year was Gen Takahashi’s Confessions of a Dog (ポチの告白/Pochi no kokuhaku, 2006). Takahashi completed the film in 2005, but because of the controversial nature of the subject matter he has run into trouble getting his film screened domestically in Japan.
Confessions of a Dog tackles head on the issue of police corruption in Japan. At the beginning of the film, we are encouraged to sympathize with the main protagonist Takeda (Shun Sugata), a young police officer. Takeda begins the film as an honest new recruit who has idealistically joined the force with the intention of making the community a safer place and has a loving relationship with his young wife. His good deeds see him quickly promoted to detective and he finds himself becoming more and more embroiled in the corrupt world of the Japanese CID. 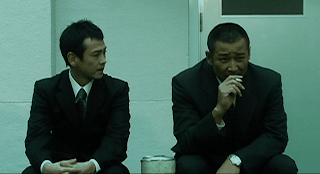 The corruption infects all levels of the police force with the domestic press, who are in theory allowed freedom of speech under the Japanese constitution, bowing to police pressure to publish only the ‘official’ police version of events. In the face of overwhelming pressure, including a vicious beating, a social activist Kusama (Junichi Kawamoto) slowly gathers evidence of police misdeeds in order to try to bring about a change in the system.

The events in Confessions of a Dog are based upon the brave research of freelance investigative journalist Yū Terasawa and incidents involving police that Gen Takahashi experienced in his youth. The film belongs to a tradition of films in Japan, beginning with the Japanese New Wave, that tackle issues the Japanese establishment would prefer to see swept under the carpet than discussed openly. I was reminded in particular of Nagisa Oshima who, like Takahashi, had difficulties with the funding and distribution of his films in Japan because of their controversial subject matter. Like Oshima, Takahashi has had to look outside Japan to get his film distributed (the film has a Hong Kong distributor, but no word of a DVD yet).
Confessions of a Dog is a tale of Shakespearean proportions with a 3 hour running time and a broad cast of characters who weave a tangled web that begins its inextricable descent into tragedy. Shun Sugata, a character actor with an impressive CV of roles under his belt (from Boss Benta in Kill Bill

and Nakao in The Last Samurai

to Takayama in Ichi the Killer

and Boss in Pulse

), was a brilliant choice of casting for the role of Takeda. Physically, he towers over his fellow actors, but he plays the role of tough guy with the charisma, charm and confliction of Jean Reno in Léon

Visually, Gen Takahashi constantly reminds us of how trapped Takeda is by framing him in confined spaces, such as the narrow gap between two sliding doors. The Shakespearean nature of Takeda’s story is emphasized by the use of Hamlet

-esque monologues towards the end of the film which use very theatrical lighting. In the final scene, when Takeda breaks the fourth wall entirely and directly addresses the cinema audience, I was reminded of Charlie Chaplin’s final scene in Monsieur Verdoux

(1947). When I raised this with Gen Takahashi after the screening, he very modestly objected that his film was addressing a much smaller audience than Chaplin was with the ending of Monsieur Verdoux

. While it is true that Takahashi’s main goal with Confessions of a Dog is to bring about change in the Japanese police force, such corruption unfortunately exists in all societies and at every level of society. Confessions of a Dog is a film that deserves wider recognition than it has received so far and I hope that it can at least achieve wider distribution on DVD than it has in cinemas.

Other films by Gen Takahashi: