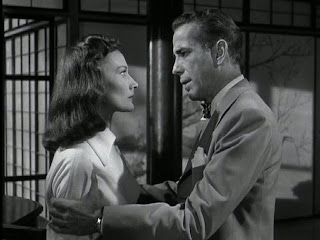 Made at the peak of Humphrey Bogart’s career, Tokyo Joe (Stuart Heisler, 1949) provides some rare glimpses into life in Tokyo under the American Occupation. Bogart plays Joe Barrett, a retired lieutenant colonel who ran a nightclub in Tokyo before the war and was married to the beautiful European singer Trina (Florence Marly). For reasons known only to himself, Joe left his wife and Japan shortly before the attack on Pearl Harbor and the intervening war made it impossible for him to return.
Several years afer the war, Joe decides to pick up the pieces of his life in Tokyo. Haunted by the song Trina used to sing, “These Foolish Things Remind Me of You”, he wonders what happened to his wife whom he believes must have died. He discovers that Trina has indeed survived the war but has remarried and has a child, and that he will need to deal with a lot of red tape, hassle, and prejudice in order to go back into business with his old friend Ito (Teru Shimada). He gets blackmailed by Baron Kimura (Sessue Hayakawa) into participating in an illegal smuggling operation and has to find a way to reconcile his personal life and ambitions with the precarious situation he finds himself in.
It was impossible to shoot Tokyo Joe on location in 1948 – the first Hollywood shoot there wouldn’t happen until House of Bamboo

(read my review of it) in 1955 – but Columbia Pictures was able to send a camera crew to Tokyo to shoot exterior footage. They were the first Hollywood camera crew to be granted permission to shoot there by the American Occupation. The opening aerial footage of Tokyo is quite impressive and Columbia pictures tries to give the film an air of authenticity with the street scene footage in the opening scenes when Joe first arrives in Tokyo. Sadly, these are rather awkwardly handled through the use of a Bogart body double and Bogart shot with rear projection of the Tokyo footage.
In spite of this, Tokyo Joe is an oddly likeable film. To be certain, it is not one of Bogart’s best performances and the plot and dialogue are a bit creaky at times, but there are enough interesting elements to keep fans of classic Hollywood films content. The story is a lot more believable than House of Bamboo

when it comes to the portrayal of interactions between Japanese and foreign characters. As the actors were shot entirely in the Columbia Pictures Hollywood studios, there are the usual faux pas of characters wearing their shoes indoors but the interiors are more authentically staged than in House of Bamboo

. In some ways they are the polar opposites of each other - the exterior shots in House of Bamboo were far superior to their interiors, and vice versa for Tokyo Joe.  In the name of realism, Bogart even takes a stab at speaking Japanese, which one would expect as the character that he plays lived so long in Japan – though he of course keeps the famous Bogart intonation.
The American pilots that Joe hires demonstrate the kind of prejudices and suspicion towards the Japanese that one would expect considering the brutality of the Pacific War. Any negative comments about the Japanese are counterbalanced by Joe’s broader experience of the Japanese – particularly his close friendship with Ito. Ito’s friendly, open nature is contrasted sharply by the slyness and manipulativeness of Baron Kimura. This role was perfect for Sessue Hayakawa, who had mastered the role of the villain during the silent period. This film marked the beginning of Hayakawa’s post war comeback in Hollywood.
The use of Japanese and Japanese-American actors aids the authentic feel of the film. The dialogue might not be as snappy as Casablanca

(Michael Curtiz, 1942) and the plot might not be as tight as The Maltese Falcon

(John Huston, 1941), but the film putters along at a decent pace.  Furthermore, it’s nice to see a more well balanced portrayal of the Japanese in a Hollywood picture than the faceless, nameless, soulless soldiers in the war movies of the day.

I would recommend Tokyo Joe to people who are interested in the time period. It is certainly interesting to see how they depict the American Occupation. I’m not sure how realistic the plot points are concerning war criminals hiding out in Korea trying to sneak back into the country to plot a coup, but the rising fear of communism was certainly a key concern of the times.