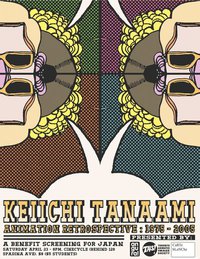 Since I was a child, I’ve always loved Disney movies and cartoons in general. Each time I draw a picture regardless of what it’s for I always think about how it would look if animated. That’s why animating my drawings comes quite naturally to me. – Keiichi Tanaami (Tokyo, 3 August 2009)
The words that most often are used to describe Keiichi Tanaami's artistic style include “pop art,” “surreal,” “psychedelic,” and “experimental.” Watching his animated films, it is easy to make comparisons with Tanaami’s mentor Andy Warhol, other experimental filmmakers of the 60s like Stan Brakhage, and masters of abstract animation like Len Lye, Oskar Fischinger, and Norman McLaren.
In fact, Tanaami has been influenced in equal measures by both mainstream animation and experimental fare. During his interview for the DVD/book Set A Portrait of Keiichi Tanaami, the artist speaks of his childhood passion for Disney movies and shorts. On the 2003 Laputa survey, Tanaami listed a wide range of animation styles as his top animations of all time. Not only do American animated classics like Steamboat Willie, Superman, and Mr. Bug Goes to Town make his list, but also some of the best of world animation including works by McLaren, Suzan Pitt, Raoul Servais, and Paul Grimault. Tanaami also lists early experimental animation by  Fischinger,  Hans Richter, Alexandre Alexeieff and Claire Porter.
In his commentary about his selections, Tanaami writes that the films of Oskar Fischinger have made a significant impact on him as an artist, influencing many aspects of his own animation. Of Raoul Servais’s Nocturnal Butterflies, he says that the film has a certain “je ne sais quoi” – a special quality or depth that one cannot achieve in digital formats. Tanaami does use computer technology in the editing process of his films today, but he and his frequent collaborator Nobuhiro Aihara still prefer to draw their films by hand.
Here are Tanaami's best of animation picks: 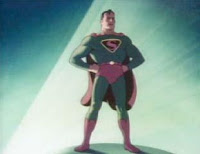 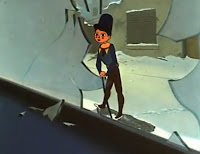 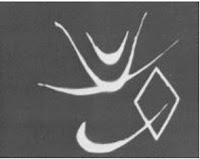 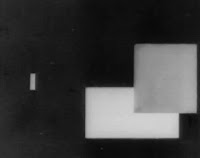 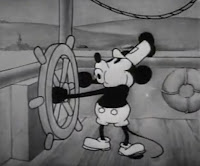 Steamboat Willie
(蒸気船ウィリー, Ub Iwerks/Walt Disney, USA, 1928)
Source: Laputa Top 150 World and Japanese Animation (2003)
A Retrospective of Keiichi Tanaami's animated films will be screened in Toronto on April 23rd with the proceeds going to earthquake/tsunami charity.  The retrospective will then travel to Winnipeg and Montreal.  Click here to learn more.