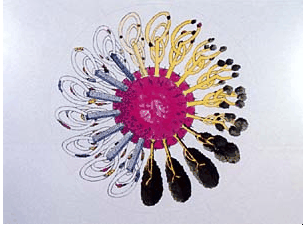 This is arguably Taku Furukawa’s greatest film. It combines his love of Norman McLaren-style experimentation, which inspired his purely experimental films like Nice To See You (1975), Motion Lumine (モーション・ルミネ, 1978), and Calligraphiti (カリグラフィティ, 1982), with his darkly humorous caricature-style characters. Furukawa’s style of drawing human figures has been influenced by the work of Saul Steinberg (ソール・スタインバーグ, 1914-1999) who worked as a cartoonist and illustrator for The New Yorker for over half a century. 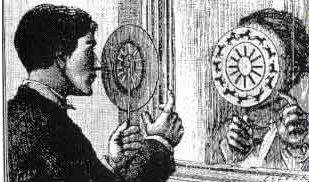 Phenakistiscpe (驚き版/Odorokiban, 1975) is a clever tribute to the 19th century animation device the phenakistiscope (フェナキストスコープ/ can also be spelled phenakistoscope), a predecessor of the zoetrope (回転のぞき絵 / ゾエトロープ orゾートロープ). The device was invented in 1832 by Joesph Plateau in Belgium and Simon von Stampfer (who called his invention a stroboscope) in Austria quite independently of one another. There were many variations on the device but it was typically two large discs mounted onto the same axis. The phenakistiscope uses the persistence of motion principle to create an illusion of motion. The first disc has slots around the edge, and the second contains drawings of successive action, drawn around the disc in concentric circles. When spun like a record and viewed in a mirror through the first disc's slots, the pictures on the second disc appear to move. 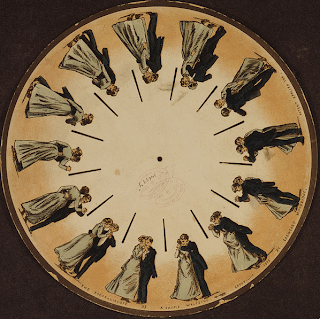 The film Odorokiban is accompanied by the clacking sound associated with the phenakistiscope. Furukawa (古川タク) depicts 18 stages of successive action around the disc. The clacking is then interwoven with other electronic sounds. Normally, the phenakistiscope can only be viewed by one spectator at a time, so for fans of early animation technologies this film delights because it opens up the magic of the phenakistiscope to group viewing. Some of the images give a nod to the subject matter of the original discs. For example, the phenakistiscope disc above this paragraph was designed by Eadward Muybridge (1839-1904, whose work also inspired Furukawa’s film Motion Lumine). Furukawa also features a dancing couple in Odorokiban, but with a twist: when the dancing couple turns the woman’s bare bottom is revealed.

Whereas the original phenakistiscopes (examples can be viewed here) normally recreated real human movement (jumping, dancing, walking, hammering), Furukawa’s phenakistiscope features a series of brightly coloured flights of fantasy which are sometimes surreal and often amusing: a skyscraper with looping freeways above it transforming into a tree, a bride and groom with their bodies elongating and shrinking like an accordion, a woman drinking soda through a straw whose head turns into a bubble that floats away. The final image is a large crowd of typical Furukawa figures running. The male figure in this final sequence is later featured drinking coffee in Furukawa’s 1977 film Coffee Break. 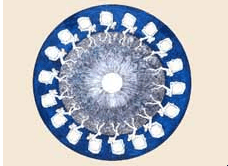 With Odorokiban, Furukawa won the prestigious Special Jury Prize at Annecy in 1975. It is fitting that he should have been the second Japanese animator to win this prize as it had previously been won by his mentor Yōji Kuri in 1962 for Ningen Dōbutsuen (人間動物園 / Human Zoo). Odorokiban can be found on the anido DVD Takun Films (read the anipages review of the DVD here). Furukawa has also contributed 26 films to the NHK’s Minna no Uta series. In recent years, he has slowed down his animation output, but his work is featured in both Winter Days and Tokyo Loop. Fans can read his blog here.