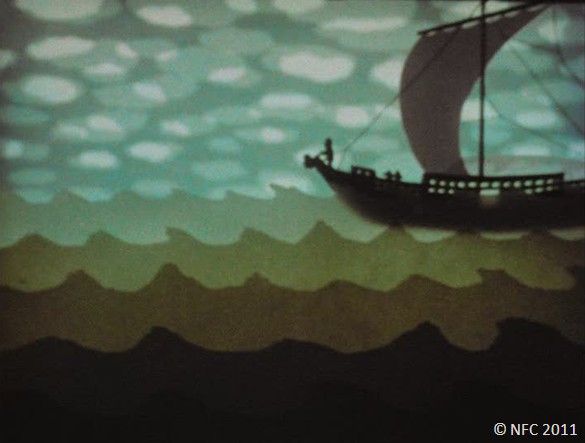 Some of the most beautiful early anime from Japan are the silhouette animations of Noburo Ofuji (大藤 信郎, 1900-61) and Wagoro Arai (荒井和五郎, 1907-94).  Inspired by the films of Lotte Reiniger – whose pre-war films were shown extensively in Japan (Donald Richie, A Hundred Years of Japanese Film

, p.247) – and drawing on the Japanese traditions of shadow plays and 19th century utsushi-e (写し絵 / magic lantern shows), Ofuji and Arai created some of the most beautiful silhouette films of the 20th century.

In his later years, Ofuji became interested in Buddhist and ocean themes.   The animator Kōji Yamamura  cites the themes of death, eros, and the human ego as examples (Shirarezaru Animation).  Ofuji's artistic masterpiece Kujira (くじら/ Whale, 1952) is one such film.  Like Kihachiro Kawamoto’s puppet films, which share Ofuji’s interest in Buddhist themes, Kujira features the themes of female suffering, natural phenomena that allude to Buddhist themes, and transformation. 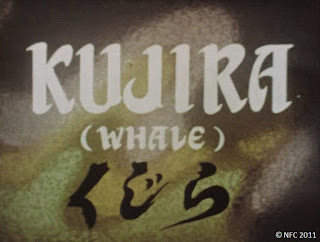 Ofuji first made Kujira (鯨/Whale) in 1927 as a silent black and white film.  Inspired by the possibilities of colour film, he remade the film in the early 1950s using not only shadow puppets (silhouettes) but also cutouts of transparent coloured cellophane (影絵とセロファン切り絵).  The cutouts were assembled on a multi-plane animation table.  The backlighting of the animation table used in combination with the transparent cellophane allowed Ofuji to create highly complex layering of forms.  It is a breathtaking experience to watch and has beautifully rendered movement and transitions.

This 8 minute short opens with foreboding music that foreshadows the dark and mysterious events to unfold.  The story begins with the creak of a mast being raised on an ancient sailing ship.  Seagulls fly overhead as the ship navigates calm seas.  Aboard the vessel, men clap and guffaw and women's voices ring with laughter as geisha entertain the men with music and dancing.

Ofuji dissolves between camera shots of varying shot compositions which, combined with the ghostly layering of transparent waves and clouds, give the film a dream-like quality.  A storm descends upon the ship.  The wooden ship creaks and groans as the sea violently tosses it about.  A giant tail of a whale emerges from the ocean and the whale seems to be following the ship as if in anticipation of the ship’s demise.  The ship’s crew struggle in vain to regain control of their vessel, but with a series of loud cracks and women’s screams, the ship sinks into the murky waters. 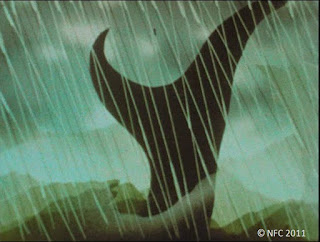 When the sea calms, a number of survivors float, their heads downcast, upon the wreckage.  One of the men finds the body of a woman floating in the water who appears to be dead.  Suddenly, the mysterious female form begins to move, terrifying the men.  As the woman cries out as she stretches herself into a standing position and one of the men immediately clutches her by the hair and drags her to him.  The more the woman struggles to escape, the more desperate the men become, tearing the clothes from her body and fighting each other to be the first to claim her.  The men’s fighting, as depicted by Ofuji’s shadow cutouts, begins to resemble a dance – their arms outstretched and curved move up and down like an interpretive dance depicting the waves of the ocean.

The tension rises, stoked on by the crescendoing orchestra of the soundtrack, to a fever pitch.  At which point the black tale of the whale rises and the woman screams out in terror.  The whale, as in the ancient tale of Jonah, swallows the woman and her tormentors whole.  This leads to the most dazzling and abstract sequence in the film as the people float around the shadowy belly of the whale, desperately trying to escape.  The men are so consumed by fear that they have forgotten their desire to rape the woman. 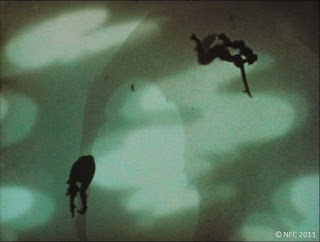 An exterior shot of the whale shows him to be contentedly bobbing up and down in the ocean.  He blows water out of his blowhole and with it the woman and her three tormentors.  They land on the whale’s back, but it doesn’t take the men long to recover from their shock and resume their attack on the woman.  The woman resists, screams in terror, and races up and down the whale’s back in a bid to escape.  Two of the men fall off the whale and disappear and the one remaining man continues to chance the woman until his evil plan is foiled by the whale who raises his tail and flings the man to certain death in the sea.  A female narrator concludes the story, telling us that since this incident the woman has been spotted in the form of a mermaid.

Until this final narrative voice, the story has actually been told entirely through a combination of the visuals, the music of composer Setsuo Tsukahara (romanized as Tukahara in 1952), and the sound effects.  By sound effects, I mean not just creaks of the ship and the thunder but also the gasps and laughter of the human characters.   The dialogue in Kujira is also more incidental than narrative in nature.  Although the characters are clearly meant to look like ancient Japanese people the story itself seems to be influenced by a combination of Asian and European influences.  The mermaid, for example, resembles the mermaids and sirens of European mythology more than she does the hideous ningyo of Japanese folklore.  The idea of a whale swallowing people whole also has very famous precedents in Western literature.  Yet, as with the famous tales of Jonah and Moby Dick, the whale is intended to be symbolic not realistic.    I think there are many possible readings that can be drawn from Kujira.  For me, Ofuji is exploring the dark side of human nature with the woman, who is the most virtuous character in the tale, being reborn in a new form at the end of the film. 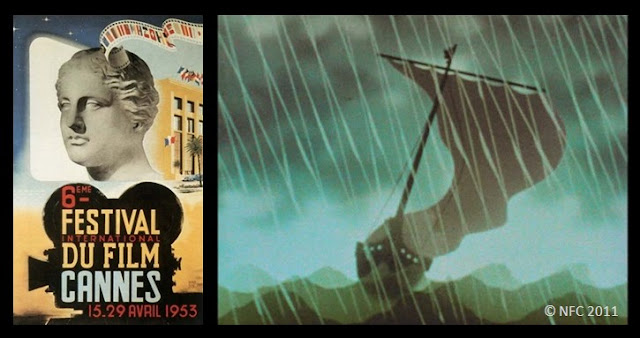 In 1953, Ofuji’s Kujira (on the programme as “La Baleine”) was part of the official selection at the Cannes Film Festival (under the name Noburo Ohfuji).  Kujira is reputed to have received much praise from the Jury president Jean Cocteau and festival attendee Pablo Picasso.  Although it has been reported in many publications that the film won an award at this festival, the official Cannes website does not indicate this. Many people have claimed that Kujira won “Second Prize” at Cannes – but as Cannes has no such prize this seems odd.  I have yet to find a reliable contemporary Japanese or French source that confirms the events that took place in Cannes that year – I may have to dive into the old French film periodicals in the Frankfurt Museum archives again soon.   I will update when I do.

It has also been often reported in error that Kujira appeared at Cannes in 1952.  The Japanese Movie Database and other online Japanese sources indicate that the film had its premiere in Japan in December 1952 – much too late for it to screen at Cannes in the spring of 1952.  The case for Kujira screening at Cannes in April 1953 is backed up not only by the festival’s official website, but also by the fact that Jean Cocteau was the president of the jury in 1953.  This would give more credence to the oft-mentioned anecdote about Cocteau praising the film.  The suggestion that Picasso saw the film at Cannes is also likely true, as Picasso had a studio in the nearby commune of Vallarius – as seen in this famous photograph of Brigitte Bardot visiting Picasso in his studio during Cannes 1956.

A good transfer of Kujira is available on the Kinokuniya DVD Ōfuji Noburō: Kūkō no Tensai.  Ofuji's original films are held in the archives of the NationalFilm Center.

Posted by Cathy Munroe Hotes at 1:41 am