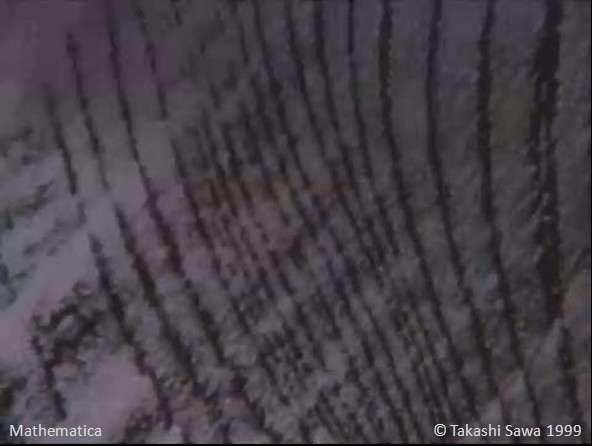 I had the rare delight recently of seeing Takashi Sawa’s experimental short Mathematica (マテマテカ, 1999).  Sawa (澤隆志, b. 1971) is perhaps best known for his work as program director at Image Forum, but along with Takashi Nakajima, Takashi Ito, Takashi Makino and Takashi Ishida, he is also one of the five great “Takeshis” of experimental filmmaking.

With his film Mathematica, Sawa trains his 8mm camera on the fine details of the world that we often take for granted.  Using the techniques of poetic montage, stop motion animation, and 3D frottage (taking a rubbing of a textured surface), Sawa explores the structures, spaces, and subtle changes over time that occur in the natural world.

In an e-mail to me, Sawa explained that he was interested in exploring the translation between timeline and depth, between 50 seconds and 2500mm, and between film and lath.  The average person usually thinks about mathematics in terms of numbers, but in actuality mathematics is study of the art and science of abstraction.  It examines how the world around us is made up of not only quantity but also structure, space, and change.   In fact, Sir Isaac Newton famously called it the language in which the universe is written (Opticks 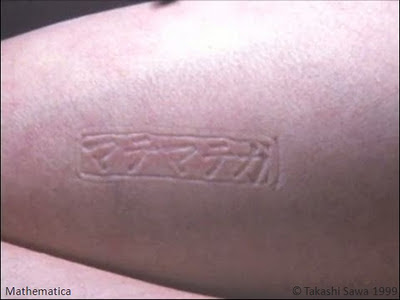 In Mathematica, this is expressed through a montage of images that demonstrate these mathematical concerns.  Skin making itself smooth again after an imprint of the title of the film has been pressed into it, the patterns of wrinkles and lines on the skin, the rings of a tree, the mane of a sorrel horse, a pencil frottage of the cross-section of a tree, the netting covering a scaffolding, and film deteriorating.  The stop motion sequences of the tree-rings were for me the most fascinating.  The movement of the rings created by the stop motion causes the close-ups of the tree-rings to resemble other patterns of nature that have also been the subject of mathematical conjecture: the waves of the ocean or the formation of patterns on the sands of the desert.  These sequences also draw attention not only to patterns, structure, and space, but also to the concept of time.

In the catalogue of the Holland Animation Film Festival 2002, Sawa wrote about how the pleasure of animation is in the way that it “breathes life in between frame and frame” and how “it is precisely the continuous playback by means of intermittent movement of these gaps and flickers that captivates both the makers and the audience of animation.  In works of experimental animation, which are made outside the system of film as industry, the question is how far we can extend the magic of these gaps and afterimages.” (p. 14).  With Mathematica, Sawa shows us how these gaps and afterimages can be used to focus our awareness on the extraordinary aspects of the commonplace in the world around us.

Takashi Sawa's work regularly screens at international festivals around the world.  You can circle him on Google Plus.