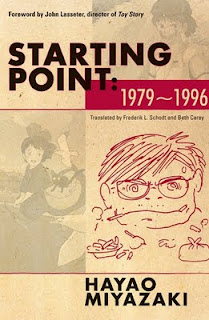 Over the past couple of months I have been reading Hayao Miyazaki’s Starting Point, 1979-1996

(VIZ Media, 2009). It is the English translation of Miyazaki’s collected writings from this period. It includes magazine articles, speeches, production planning notes and memoranda, sketch diaries, and other items sure to delight Studio Ghibli fans.
I was surprised to discover how decidedly Miyazaki gives his opinions on animation and animators. Occasionally, his remarks are downright gossipy – such as when he relates the embarrassing drunken escapades of animator Yasuo Otsuka (The Castle of Cagliostro

) or calling Isao Takahata (whom he affectionately calls Paku-san) the "descendent of a giant sloth". In the afterword, Takahata admits to his slothful tendencies, especially when compared to Miyazaki who lives up to the meaning of his given name (ie. “fast”). Miyazaki’s criticism of others is counterbalanced by his acknowledgement of his own weakness, such as admitting that he left his wife to her own devices when it came to raising their children and that as a young apprentice under Yasuji Mori he could be “confrontational, impudent, and insolent.” (205)
Part of the reason for Miyazaki’s initial impudence towards Mori was that he felt that his style of animating was out of date. Mori, who was also a mentor to Otsuka, Norio Hikone, Reiko Okuyama, and Yoichi Kotabe, was a famed illustrator and during his time at Toei Doga he was responsible for many popular characters and beautiful animation sequences in films like The Legend of the White Snake (1958) and The Little Prince and the Eight-Headed Dragon (1963). Miyazaki writes that it took him many years to really appreciate what Mori had taught him and that his epiphany came during a screening of the final cut of Hols: Prince of the Sun (1968) – a film which moved him to tears.

Most startling are Miyazaki’s negative remarks about Osamu Tezuka which were published in Comic Box shortly after Tezuka’s death in 1989. Anticipating that the magazine would be full of praise for the “father of manga” and “godfather of anime”, Miyazaki voices his dissatisfaction with many of Tezuka’s animated works. While Miyazaki knows that Tezuka’s style – particularly his manga from the period 1945-1955 – influenced him greatly when he was a young artist starting out, he was not a fan of Tezuka’s animation. He found it too pessimistic and even expresses having felt disgust when he watched films like Mermaid (1964), The Drop (1965), Tales of a Street Corner (1962), Pictures at an Exhibition (1966), and Cleopatra (1970). Miyazaki even bemoans the fact that Astro Boy set the bar so very low in terms of cost – meaning that anime productions ever since have suffered from low budgets. He believes that TV anime was destined to start in Japan with or without Tezuka: “Without Tezuka, the industry might have started two or three years later. And then I could have relaxed a bit and spent a little longer working in the field of feature animation, using more traditional techniques. But that’s all irrelevant now” (196). I think Miyazaki’s main gripe is that the lower budgets meant artistic sacrifices and lowered the quality of the animation.
Osamu Tezuka was not the only animator to be criticized by Miyazaki. Here are some of the highlights of Miyazaki’s animation likes and dislikes:
On the endings of The Snow Queen (Lev Atamov, et al., 1957), La Bergère et le Ramoneur (Paul Grimault, 1952), and The Tale of the White Serpent (Taiji Yabushita/Kazuhiko Okabe, 1958):

I know I shouldn’t criticize others, but why do the final scenes of cartoon movies always have to be so ridiculous? This was true of The Snow Queen; its ending was that film’s greatest flaw. And the ending of La Bergère et le Ramoneur makes it look like the production staff went out to have a wrap party. Not only that, at the ending of The Tale of the White Serpent, Bai-Niang looks truly stupid. . . (118)

“I like Fleischer works. And when I say “Fleischer”, I do not mean Dave Fleischer the individual, but the whole animation staff. . . In fact, I had a strong sense that Mr. Bug Goes to Town was a work that might not have even been created or animated by Dave Fleischer. This was the first of the problems that I had.”

“Several of the Popeye films are absolutely first-rate, whereas Mr. Bug Goes to Town is only second rate”

“. . . Mr. Bug Goes to Town is both wonderful and incredibly stupid. People say Dave Fleischer created it, but I would like to extend my heartfelt greetings and congratulations to the nameless staff members who managed to crawl their way out of his control. . . I do wonder where they went. They probably scattered throughout the industry, lost their powers, and either went through a masturbatory period of creating Fleischer’s Superman, or disappeared into doing work on not particularly memorable films.” (115-19)

“Even were I not involved in animation, I still would have thought I had seen something wonderful when I saw this film. This is a powerful work that couldn’t have been made halfheartedly. . . My hat goes off to Back for giving such a wonderful form to this motif by using such an expressive medium as animation. Even more, I offer my deepest admiration to those at the SRC/CBC who funded such an obviously non-commercial work.” (143)

“In the cel animation production we are currently working on, we’ve found drawing plants to be very difficult. If we draw just the plants waving in the breeze, it looks so formulaic. Plants exist in the weather and light rays that surround them – wavering in the wind, shimmering in the sunlight. I am always puzzling over how to draw such things. I’ve given up and resigned myself to realizing that we can’t draw plants with our usual techniques. But Back has taken this problem head on and mastered it. . . His imagery is beautiful.” (144-45)

“I was moved when I watched this film. In the same way that I feel about Yuri Norstein.” (146)

I found myself disgusted by the cheap pessimism of works like [Mermaid] or [The Drop], which showed a drop of water falling on a thirsty man adrift at sea. I felt that this pessimism was qualitatively different from the pessimism Tezuka used to have in the odl days, as in the early days of [Astro Boy], for example – but it also could have been that in the early days I felt great tragedy and trembled with excitement at Tezuka’s cheap pessimism precisely because I was so young. (194)
. . . I felt the same thing with Tezuka’s Tales of a Street Corner – the animated film which Muschi Pro poured everything into making. There’s a scene in the film where posters of a ballerina and a violinist of some such things are trampled and scattered by soldiers’ boots during an air raid and then waft into the flames like moths. I remember that when I saw this, I was so disgusted that chills ran down my spine. (194-5)
Now I’ll refrain from going into too much detail because I don’t want to belabour the point, but when I saw [Pictures at an Exhibition], I really wondered what the heck the film was all about. And in the last scene in Cleopatra, at the line, “Go home, Rome,” I felt disgust. They had spent so much effort trying to develop so many sexy love scenes that the final “Go home, Rome,” line was just oo much for me to take. that was around the time I really sensed the bankruptcy of Tezuka’s vanity. (195)

Hakujaden (JP)
On his first encounter with The Tale of the White Serpent (Hakujaden) when he was a secondary school student:

At the time I dreamed of becoming a manga artist, and I was trying to draw in the absurd style then popular, but Hakujaden made me realize how stupid I was. It made me realize that, behind a façade of cynical pronouncements, in actuality I was in love with the pure, earnest world of the film, even if it were only another cheap melodrama. I was no longer able to deny the fact that there was another me – a me that yearned desperately to affirm the world rather than negate it.
After that, I have always given a great deal of thought to what I should create. And at the very least, I can say that no matter how self-conscious and embarrassed I might feel, I also feel compelled to create something that I truly believe in. (70)

Snedronningen is proof of how much love can be invested in the act of making drawings move, and how much the movement of drawings can be sublimated into the process of acting. It proves that when it comes to depicting simple yet strong, powerful, piercing emotions in an earnest and pure fashion, animation can fully hold its own with the best of what other media genres can offer, moving us powerfully. While Hakujaden might have its weaknesses, I honestly believe that it has this same quality. (71)

The Lord Of The Rings: The Fellowship Of The Ring
On the short-comings of live action models in animation in Cinderella (Disney, 1950) and The Lord of the Rings (Ralph Bakshi, 1978):

When using human actors as models, skilled teams of animators required a broad type of acting that mainly showed the human form in silhouette. They came to the conclusion that, rather than the style of acting developed for dramatic films, stage acting was more suitable for animated films. This is precisely the reason that the gestures used by characters in Disney’s animated films look like they come from a musical, and that [The Snow Queen] depends on movements like those in a girls’ ballet. there are many examples where using live-action models can result in disaster. Ralph Bakshi’s The Lord of the Rings. . . was doomed to failure because it relied on clumsy live-action sequences. Disney’s Cinderella. . . is living proof that modeling live-action images in the pursuit of realistic movement is a double-edged sword. In trying to achieve a sense of realism by using an average American young woman as a model, they lost even more of the inherent symbolism of the original Cinderella story than they did with their version of Snow White. (74-5)

This is just a small taste of Hayao Miyazaki’s thoughts on animation. To learn more, pick up a copy of Starting Point, 1979-1996

.  To learn more about films loved by the animator's at Studio Ghibli, read about the Studio Ghilbi Museum Library.