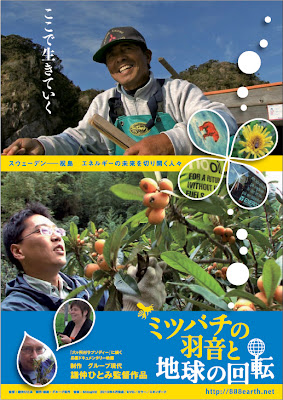 On the isolated heart-shaped island of Iwai-shima in Yamaguchi prefecture, the residents – the majority of whom are elderly – have been fighting the construction of a nuclear power plant for close to 30 years. Long before the disaster in Fukushima brought the danger posed by nuclear power facilities in Japan to the world's attention, director Hitomi Kamanaka has been documenting the grassroots efforts to put local communities and the environment ahead of political and corporate interests. Her documentary film Ashes to Honey (Mitsubachi no Haoto to Chikyū no Kaiten, 2010) is currently in hot demand around the world because of the issues it raises about Japan’s nuclear industry.
What is the issue?
The electricity company Chugoku Denryoku, with the support of government officials, has planned the building of a nuclear power plant on the shores of Tanoura, one of many islands in the Seto Inland Sea. This is a relatively poor area with an aging population and the power plant would bring jobs to the area. The residents of the other islands in the region have been coerced into agreeing to the building of the plant, but the people of Iwai-shima have refused to be paid off and are standing their ground in the face of immense political pressure. They argue that the nuclear power plant will destroy the unique local ecosystems and ruin the environment in a way that would make it impossible for them to continue in their traditional ways. This would not only be because pollution from the plant would destroy their organic farming status, but also because the land reclamation plans would destroy the bay and hot water that the plant would emit into the sea would destroy fragile sea life.
Who are the protestors?
The core group of protestors are local people who carry on family traditions of fishing and farming. Their efforts have been supported by environmental activists from around the country such as the Rainbow Kayak Squadron.
In Kamanaka’s previous film Rokkasho Rhapsody (2006), I was particularly struck by the apathy of a late middle-aged couple. When they were asked about their opinion on the building of a nuclear reprocessing facility in their community, they said that they didn’t care because they were old. Meaning that they would be long gone from this earth when the effects of the facility would be noticed.
In Ashes to Honey, the loudest and most dedicated voices in the anti-nuclear movement are those of elderly women. Like most rural communities in Japan, most of the young people have left their ancestral villages for urban areas leaving behind the elderly. The average age of the islanders on Iwai-shima is 75, and the vast majority of these are women. These are no ordinary women. They are a tenacious bunch who have carried on the fight against the nuclear plant for decades. It has been a difficult battle, but they have come together to support one another in their “Happy Grandmas Café”.
The younger generation is represented in the film by Takeshi Yamato, a young man who has returned to the community in order to carry on the traditions of living off the land and the sea. He is a reluctant hero in the documentary. He and his family did not ask for this attention, they are having enough trouble just trying to get by as it is. It is inspiring to see his commitment to his community and how this camera-shy man bravely stands up for what he believes in.
Why are their voices not being heard?
The better question is “Why is no one listening?” The simple answer is corruption and greed. For decades in Japan, government bodies at both a local and a national level have been coming up with radical schemes in order to stem the tide of young people abandoning the countryside for urban areas. Some have enjoyed a moderate success, while others have been doomed to failure. The most risky of these schemes have been the construction of nuclear power plants in remote coastal areas.
There are two really powerful scenes in the film that really shine the spot line on the corruption at work behind the scenes. The first is when the Kaminoseki town council meeting where they are to vote on whether or not the land reclamation for the plant should go ahead. More than 200 people come to participate in the process and are informed that only 20 of them can enter. The select few are chosen by a drawing of straws. They shout their protest, but their voices go unheard and the vote goes ahead with an 8-4 decision to approve the filling in of the bay.
The most powerful image in the film; however, is the sight of those elderly women sitting in boats in a stand-off with officials trying to start filling in the bay. The plan is to sit in the boats for 50 days.  At which point, the land reclamation permission granted to Chugoku will expire and they will have succeed in at least delaying the inevitable. A young man with a megaphone tries to make the protestors feel guilty (Why are you against something that will bring jobs to the region?) and false promises. The grandmas are not having any of it shouting back that they will never give up:  “We know what we are doing is right!”

What are the solutions?
For a glimpse of what life could be like in Japan if a concerted effort were made to support sustainable energies, Hitomi Kamanaka goes to Sweden to learn about their plans to become to first oil-free economy. Through the use of wind power, solar power, biofuels, and other inventive methods, Sweden has become a world leader in the movement towards a sustainable future. The biggest move that they made was to break up the electricity companies’ monopoly on the market. Swedish citizens can now choose the source of their electricity. By allowing consumers to decide the cheapest and most ethical energy company for them, companies have had to become more innovative in their approaches to energy.
The most amusing scenes in the film come when the Swedish interviewees express shock when they learn from Kamanaka about the more restricted situation in Japan. “You don’t have a deregulated market?” says one astonished man. Another says that there were warning signs many years ago and that even Sweden should have taken action sooner. He then looks straight into the camera and proclaims: “Japan! Start Now!”
The directness of the Swedes in the film is an amusing contrast to the Japanese politicians who avoid answering questions directly. Not only does this excursion to Sweden provide alternative solutions to Japan’s dependence on nuclear energy and foreign oil, it’s a stark reminder that the problem Japan is facing is not local, but global. My native country of Canada is also well behind when it comes to renewable energy because we have relied for so long on the exploitation of our natural resources and have allowed electricity providers to enjoy a monopoly on the market for too long.
What can you do?
Follow the Ashes to Honey page on Facebook to learn updates on the situation in Iwai-shima or to find out about upcoming screenings near you. (EN)
Follow the Ashes to Honey blog (JP)
Write to your local television broadcaster to recommend that they air this film.
The soundtrack can be ordered at itunes. (US link only)

I will update when the film becomes available on DVD on cdjapan. In the meanwhile, Hitomi Kamanaka’s other DVDs are available to order now:

Hibakusha Sekai no Owari ni
(May be Japanese only)
© Catherine Munroe Hotes 2011
Posted by Cathy Munroe Hotes at 8:13 pm