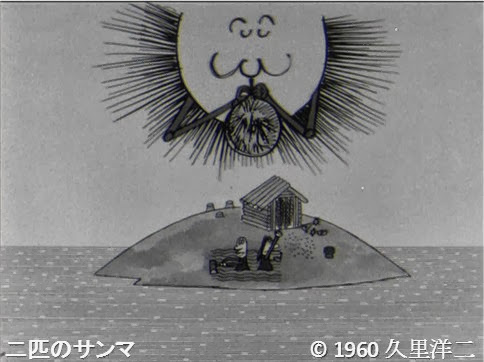 Yōji Kuri (久里洋二, b. 1928) made Two Grilled Fish (二匹のサンマ/Nihiki no Sanma) in 1960, which was a seminal year in Japanese animation history. The first ever domestic anime, Three Tales (新しい動画 3つのはなし, 1960) was broadcast on the NHK in January and in November, the first experimental animation festival of the Animation Group of Three (Animation Sannin no Kai) – Yōji Kuri, Hiroshi Manabe, and Ryōhei Yanagihara – was held at Sōgetsu Hall.  The hall was at the heart of Tokyo’s dynamic avant-garde movement which embraced a variety of arts from music to the theatre, from sculpture to the cinema.

With films like Clap Vocalism (人間動物園, 1962), which won prizes at Annecy and the Venice Biennale in 1963, and Two Grilled Fish, Kuri was to inspire a new wave of experimental animation both in Japan and internationally.  Two Grilled Fish screened at the second Animation Group of Three festival at Sōgetsu Hall on January 19th, 1962.  Alternate English titles for this black and white cutout animation include “Two Fishes” and “Two Pikes”.  I have gone with the title that best matches the French of the official international title of Kuri’s 1967 colour remake of the film: Deux poissons grillés.  In the original Japanese title, “nihiki” is the counter for two small animals and “sanma” is a slender fish known variously in English as Pacific saury or mackerel pike.  It is a popular dish in Japan that is associated with the autumn months.  The most common way to prepare sanma is salted and grilled whole and served with daikon oroshi (finely grated daikon radish) and side dishes of rice and miso soup.

Two Grilled Fish is adapted from Kuri’s self-published manga of the same name.   The soundtrack was designed by the avant-garde composer and poet Kuniharu Akiyama (秋山邦晴, 1929-96).  The soundtrack is a fascinating mixture of experimental sounds and funky jazz music.  Kuri then showed an early version of the animation to his friend, the renowned poet Shuntarō Tanikawa (谷川俊太郎, b.1931), who wrote a text inspired by it.  This text is narrated by the actor Harukazu Kitami (北見治一, 1920-95). 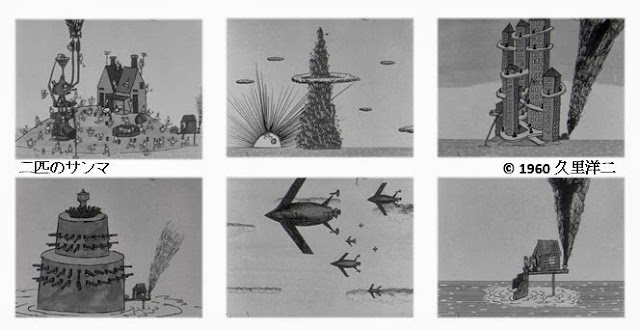 Many of Yōji Kuri’s films avoid a narrative, but Two Grilled Fish is a kind of modern parable.  It tells the story of a man and a woman who go by raft to a remote desert island with chickens and a dog.  At first, it is a kind of paradise for them.  They farm and fish following the same routine every day, feasting on grilled sanma that they roast out in the open.  One day, their harmony gets interrupted by a mustachioed scientist on a raft powered by an abused pig.  This unwanted visitor constructs a robot which begins the process of industrialization on the island.  The couple are disgruntled but decide to put up with the man and his technology.

Things take a turn for the worse when a crowded raft of men and women come to the island and violently take it over.  The couple move their home to their fishing dock and barricade themselves using barbed wire.  The newcomers multiply and take over the island at a rapid pace.  Soon, the island is overwhelmed with houses, which then transform into skyscrapers with cars spewing pollution.  The next phase of industrialization is warfare, with the island transforming into a fort to protect itself against missiles.  In the end, the island is destroyed, with the couple left of the tiny edge that remains.

The film expresses the angst felt by the Japanese public in 1960.  1955-61 was a period of rapid economic growth for Japan in the run up to so-called the “Golden Sixties” and with the announcement in 1959 that Tokyo would host the 1964 Summer Olympics, plans to build the Tōkaidō Shinkansen – Japan’s first bullet train – and other infrastructure projects were fast tracked.  The faces of major cities in Japan, particularly Tokyo, were changing at a rapid rate.  While for some this economic prosperity may have been a positive thing, politically there was a lot of friction.  Just one year before Two Grilled Fish was made, protests broke out against Jana’s security treaty with the United States leading to the unseating of the Prime Minister Nobusuke Kishi.  There was much angst concerning the possibility of the Americans stockpiling nuclear weapons on the military installations in Japan.  Two Grilled Fish encapsulates both the sense of the growing environmental cost of industrialism and the Cold War fears of a nuclear war using minimalist animation armed with humour and a deep sense of irony.  The "two grilled fish" are a metaphor for the idealistic couple who desire a peaceful existence, yet the fruits of their hard work are constantly under threat from destructive forces beyond their control.
The film appears on the Universal Geneon DVD:

The Collected Works of Yoji Kuri