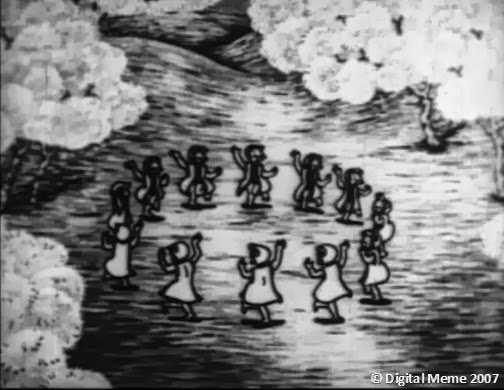 The surviving copy of the 1936 animated short The Sparrows’ Lodge (雀のお宿/Suzume no O-yado) that appears in Digital Meme’s box set the Japanese Anime Classic Collection is on the whole in remarkably good shape apart from missing its original opening credits.  Credits have been digitally added, crediting the film as being directed by Kenzō Masaoka (政岡 憲三, 1898-1988) with drawings by Masao Kumagawa (熊川正雄, 1916-2008) – both men are considered important pioneers of anime and worked together on a number of projects together including Masaoka’s classics Benkei vs. Ushiwaka (1939) and The Spider and the Tulip (1943). 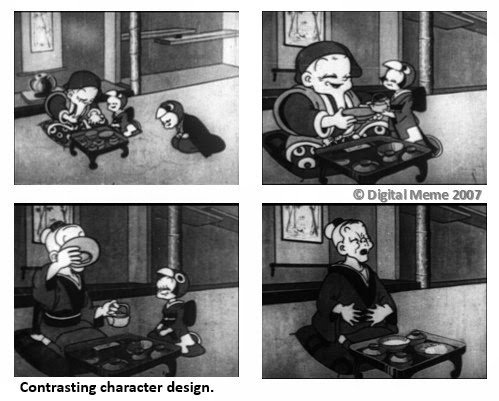 The film starts rather abruptly with the rather startling text telling us that the little girl Chunko has had her tongue cut out by her greedy grandmother and has been sent to the Sparrows’ Lodge.  Chunko’s kindly grandfather is concerned about her well-being and travels to the Sparrow’s Lodge to see how she is doing.  A Japanese audience would automatically recognize the tale as an adaptation of the well-known fable The Tongue-Cut Sparrow (舌切り/ Shita-kiri Suzume) which has been translated many times into English.

In Masaoka’s version, the sparrow has been transformed into a little girl who has been sent to some kind of a school or orphanage where the girls and their teacher dress in kimono with a sparrow hood.  Her tongue has not been fully cut out because she can speak.  She and the lodge offer the grandfather hospitality which he receives politely and he watches and enjoys the girls’ dance performance.  When it is time for him to leave, they offer him two trunks as a departing gift.  The grandfather is reluctant to take either one of the trunks, but fearful of being rude he agrees to take the lighter of the two trunks home with him. 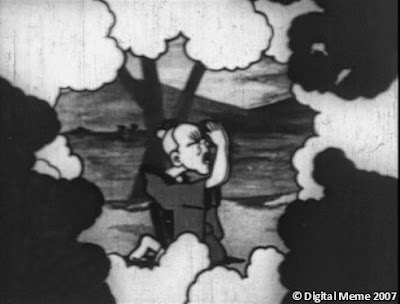 When he arrives at home, the man is chastised by his wife for not taking the heavier trunk.  Her irritation grows upon opening the trunk and discovering that it is full of treasure.  She decides to go to the Sparrow’s Lodge herself in order to get the heavier trunk.  Upon arriving at the lodge, the grandmother receives the same hospitality as her husband but her reaction is different.  She rudely scarfs down all the food and drink offered to her, and ignores the dancing.  When it is time to go, she avariciously wants to take both trunks but as she cannot carry them both, takes only the heavy one.  She is so overwhelmed with greedy curiosity that she stops partway home to open the trunk and is given a nasty surprise.

As with all of Masaoka and Kumagawa’s early work, The Sparrows’ Lodge has been impeccably drawn.  Apart from the nasty grandmother the characters all have round and friendly faces.  Unlike the full face of the kindly grandfather, the grandmother’s face is lean and scrunched as is fitting her character.  The depiction of interior spaces and landscapes follow a typical Japanese aesthetic.   From an animation perspective, I find the transitions particularly interesting.  In order to collapse time on the walks to and from the Sparrows’ Lodge, Masaoka uses a series of irises.  Dissolves are much more commonly used for this effect, but I suspect the production team went with iris wipes because it creates a similar effect using more paper than expensive celluloid.  The iris wipes drew my attention to the changing scenery – not only is it aesthetically pleasing but it emphasizes the effort involved in walking all the way to the Sparrows’ Lodge. 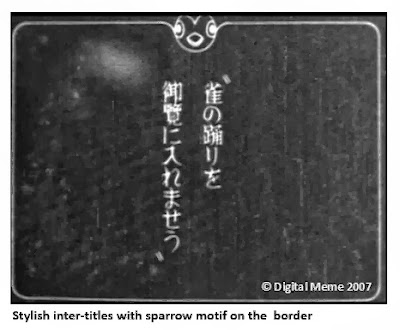 Another lovely touch is the little sparrow face in the border of the inter-titles.  One of my favourite things about silent movies is the variety of cleverly designed title cards.  The Digital Meme version of this film features the excellent benshi narrator Midori Sawato (澤登翠), whose performance, as  always, enhances this silent movie. There is also musical orchestration.  The film was produced by Oku Shōkai (奥商会) and distributed by Towa Shōji (東和商事映画部).  It’s a delightful little tale with a satisfying conclusion (a positive twist on the gory usual ending) – an excellent example of early anime.

For more films by Masaoka, check out the Anido DVD of his selected works.