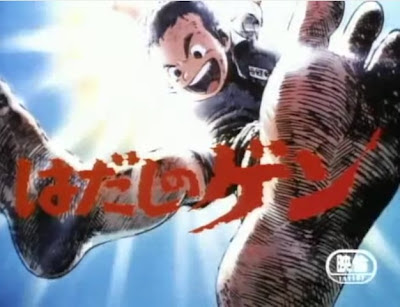 The popular mediums of the comics and animation sometimes get dismissed as mere amusements for children, but they can also be powerful tools for expression and education.  For the mangaka Keiji Nakazawa, his manga serial Barefoot Gen (はだしのゲン/Hadashi no Gen, 1973-74) was his method of coming to terms with his experiences of the atom bomb and his continuing bitterness as a hibakusha with postwar politics in Japan (Learn more in Asai Motofumi’s interview with Nakazawa in Japan Forum).

Nakazawa’s manga has not only educated generations of post-war Japanese about the bombing of Hiroshima from a child’s perspective, but it has also inspired other artists to follow in his footsteps and harness the power of the comics format to give voice to the unspeakable.  Most notably, Art Spiegelman has cited Barefoot Gen as having had a significant impact on him during the making of Maus (1991).

Madhouse’s 1983 adaptation of Barefoot Gen under the direction of Masaki Mori remains true to the message of its source material in its unflinching portrayal of the devastation wrought by the atom bomb on the people of Hiroshima.  Like other classics of the anti-war genre – Renzō and Sayoko Kinoshita’s Pica-don (ピカドン, 1978) and Isao Takahata’s Grave of the Fireflies (火垂るの墓/Hotaru no Haka, 1988) – the story is powerful because it portrays the inhumanity of war from the perspective of its most innocent victims: children.

Gen is a grade school boy who lives with his father, heavily pregnant mother, older sister, and bratty younger brother in the summer of 1945.  His father is a wheat farmer but despite good crops, they have fallen on hard times because no one can afford to pay them for their produce.  This is a great story for teaching students because it smashes a lot of widely held myths about the Japanese blindly following the will of their leaders during the war.  As was true of Nakazawa’s own father, Gen’s father holds dangerous left-wing views that could get him into trouble with authorities:  he is against the war and Japan’s policies and boldly prophecises to his sons that Japan will lose this war.

Suspense is built in the lead up to the dropping of the bomb through repeated false warning trips to the air raid shelter, and the father’s growing suspicion that the fact that other major cities are being bombed more often than Hiroshima is a bad sign.  The anime intersperses the emotional personal drama of Gen, his family, and neighbours with sequences with an impersonal documentary narration that tell us the facts about the war and what the armed forces are doing.  Thus, we know that the Enola Gay is coming before the characters do themselves.  The bomb is even shown from the perspective of the Enola Gay as it falls silently onto the city.

The “pica” of the flash is depicted in black and white – as was in the Kinoshitas’ depiction of the same moment.  The “don” of the explosion is horrific in its detail, drawing on both photographic evidence of the destruction and the colours and style of the grotesque in Japanese traditional and modern art.  The  immediate devastation and its aftermath are depicted in gruesome detail: people stripped of their skins, dead and dying infants, people driven to insanity by what they have witnessed, maggots and flies feeding on both the living and the dead.  Man’s inhumanity to man is laid bare in all its horror and agony.

Gen and his mother desperately try to save their trapped family from the fire engulfing their home without success.  The two are left to struggle on their own with Gen aiding his mother as she gives birth in the ruins of their once beautiful city.  Despite suffering from malnutrition themselves, Gen and his mother never lose their own humanity.  They try – often in vain – to help others who are suffering and even adopt a young orphaned boy called Ryuta whose cheeky ways reminds them of Gen’s  lost litrle brother Shinji.

One of the reasons that the story of Barefoot Gen is such a successful narrative is that it refuses to fall into the easy traps of anti-Americanism or over-sentimentality.  As equally as powerful as the anti-nuclear bomb message, the film also raises criticisms of the Japanese themselves which were core messages of the original manga.  The inadequate aid that was sent to Hiroshima following the attack, the suppression of survivors stories for years after the war, and the widespread discrimination against the hibakusha (被爆者/atomic bomb survivors).

This last theme is personalized through the story of Seiji, a survivor who comes from a well-to-do family.  Gen and Ryuta take to the streets in search of work in order to get enough money for milk for the baby and they are hired by Seiji’s brother to look after him.  Seiji is covered in maggots and flies because no one in his family will touch him themselves and the family has been unable to find anyone with the stomach to handle the job of picking the maggots off of his skin.  Gen and Ryuta are desperate for money and put up not only with the stench but with the abuse of Shinji who calls them “vultures” and resents his situation.  In a remarkable scene, Gen and Ryuta are able to connect with Seiji on a human level and we learn that Seiji’s pain at being shunned by his family like a leper outweighs the physical pain of his bomb injuries.  His gratitude at these two young boys for teaching him that he can still feel real human affection is depicted movingly with an image of Gen and Ryuta reflected in a large tear falling from Seiji’s eye.

The original Barefoot Gen manga is quite a long series – the current American English edition at Last Gasp has 10 volumes, so a feature film cannot possibly encapsulate Nakazawa’s exploration of the long term effects of the bombing of Hiroshima on its victims.  There is more tragedy before the film ends but it still manages to leave the door open to optimism for the future.  In spite of many people claiming that it will take 70 years for grass to grow again in Hiroshima, the boys discover that wheat has begun to sprout again.  Gen recalls his father once advising him and Shinji to learn from the example of the wheat (mugi):

Its life begins in the coldest season of the year.
The rain pounds it,
the wind blows it. . .
it’s crushed beneath people’s feet
but still, the wheat spreads its roots and grows.
It survives.
Learn from it boys.
Grow big and strong and let nothing beat you down.

Hadashi no Gen DVD (JP only)

Barefoot Gen won Masaki Mori the coveted Noburo Ofuji Award for innovation in animation in 1983.  The success of the film led to a sequel a few years later, Barefoot Gen 2 (Toshio Hirata/Akio Sakai, 1986) which picks up Gen’s story three years after the war and examines the long-term consequences of the bomb.  Both films were rereleased on DVD with subs by Geneon in the US but are currently only available second hand.  The French box set is also out of print, but it is available here in Germany: Barfuß durch Hiroshima - Film 1 & 2 (OmU) [2 DVDs] [Deluxe Edition].  This edition has  German, French, Dutch, Polish, Swedish, Danish and Finnish subs.  The Japanese release also has no English subs.

Last year a documentary was made about Nakazawa's life called Hiroshima Through the Eyes of Barefoot Gen.  Here's an excerpt:

Posted by Cathy Munroe Hotes at 12:15 am