Taku Furukawa “A Playful Heart” Exhibition: “From a Single Line” 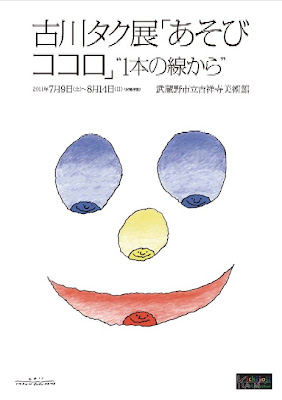 A retrospective of the career of Japanese alternative animation pioneer Taku Furukawa has opened this week at the Kichijoji Art Museum in Musashino. Furukawa (古川タク, b. 1941) has worked as an animator, illustrator, teacher and mentor for over 40 years.  He has won many prestigious awards in his career including the Special Grand Jury Prize at Annecy (1975), the Bungeishunju Manga Award (1978) for his book The Takun Humor, and the Noburo Ofuji Award (1980).
The exhibition is called Taku Furukawa “A Playful Heart” Exhibition: “From a Single Line” (古川タク展「あそびココロ」“1本の線から”). “From a Single Line” refers to his minimalistic line drawing aesthetic. Furukawa has cited the influence of renowned New Yorker illustrator Saul Steinberg (1914-1999) on his trademark style. Furukawa was also influenced early in his career by his mentor Yōji Kuri (久里洋二, b. 1928). Furukawa worked his way up at Kuri’s studio in the 1960s, eventually doing key animation on many important films such as AOS (1964) and Au Fou! (1965). In 1966, he ventured out as a freelance animator, eventually forming his own studio, Takun Box, in 1970.
The “Playful Heart” in the title of the exhibition refers not only to Furukawa’s tongue-in-cheek sense of humour in his art, but also to playful spirit with which he approaches animation. Handmade films like Nice to See You (1974) follow in the experimental traditions of animators like Norman McLaren, Len Lye, and Oskar Fischinger. In Calligraphiti (1982), Furukawa even experiments with direct animation which involves drawing directly onto the film stock itself.
Furukawa’s most notable work combines his experimental tendencies with his playful sense of humour. In Phenakistoscope (Odorokiban, 1975), the film that won him the prestigious Special Grand Jury Prize at Annecy, Furukawa drew his inspiration from the 19th century pre-cinema device of the same name. Using frame-by-frame hand drawn animation techniques, Furukawa replicates the Phenakistoscope discs, animating all 18 stages of successive action at once. Some of the images he depicts are nods to the original subjects of the Phenakistoscope discs, such as a couple dancing, but he moves away from just recreating human movement into a realm of fantasy and the colourfully abstract: a skyscraper with looping freeways above it transforming into a tree, a bride and groom with their bodies elongating and shrinking like an accordion, a woman drinking soda through a straw whose head turns into a bubble that floats away. (Read my review of Phenakistascope to learn more and see same Phenakistascope illustrations). 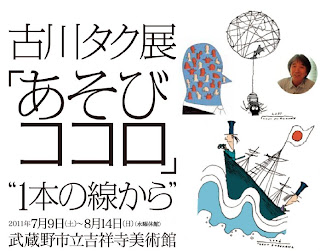 Not only does Furukawa adapt old technologies to modern sensibilities, but when personal computers came on the scene in the 1980s he also demonstrated a willingness to experiment with new technologies. To the contemporary spectator, the playful doodle animation Mac the Movie (1985) seems unsophisticated to us today; however, it is significant as an early example of animation on an Apple Mac personal computer. The first Macintosh, with its groundbreaking graphics painting software program MacPaint, had only just been introduced the year before in January 1984. Furukawa highlights the playful nature of this experimental film by employing an equally lighthearted soundtrack: a synthesizer interpretation of ‘Singing in the Rain’. Qualities specific to this early personal computer technology include the flicker of the screen and the extra large pixel sizes. Play Jazz (1987) offers a more sophisticated early example of computer animation (I am guessing he did this on a Macintosh II because it’s in colour – the title may be a reference to Lotus Jazz), due in part to the advances in computer technology. The improvisational nature of the Matisse-inspired animation is reflected in the jazz music soundtrack. This combination of experimentation, improvisation, music and animation inevitably reminds one of Norman McLaren and Evelyn Lambart’s interpretation of Oscar Peterson’s jazz music in Begone Dull Care (NFB, 1949).
To learn morea bout Taku Furukawa, you can read my reviews of his films Speed, which won the Noburo Ofuji Prize for 1980 and Jyōkyō Monogatari (aka Tyo Story, 1999) - an animated reworking of Yasujiro Ozu's Tokyo Story

(1953). He also made a number of shorts for the long-running NHK series Minna no Uta.
In addition to showcasing a selection of Furukawa's animations, illustrations and drawings, this exhibition also features installations by Furukawa.  If you are not lucky enough to be in Tokyo for this event, you can support this artist by ordering a selection of Furukawa's works from Anido.
Taku Furukawa “A Playful Heart” Exhibition: “From a Single Line”
古川タク展「あそびココロ」“1本の線から”  (English info)
July 9th – August 14th