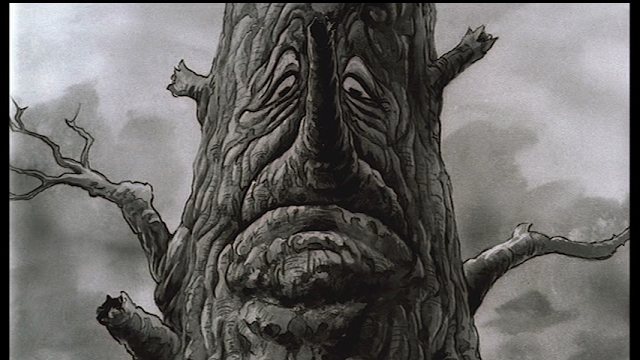 Legend of the Forest (森の伝説/Mori no Densetsu, 1987) is Osamu Tezuka’s flawed, unfinished masterpiece. It took Tezuka and his staff more than a decade to complete the first and fourth movements of the piece. In 2008, there were rumors that Tezuka’s son Macoto Tezka (Black Jack

, Akuemon) would finish the project but from what I understand, it is still a work in progress.
Emulating Disney’s Fantasia (1940), the animation was designed with a classical piece of music in mind: Tchaikovsky’s Fourth Symphony Op. 36 as performed by the Tokyo Symphony Orchestra under conductor Kenichiro Kobayashi.  The story is an adaptation of a Tezuka manga called Musa the Flying Squirrel (モモンガのムサ, November 1971) which was #9 in his 1970s manga series Lion Books (ライオンブックス). Click here to see sample pages from this manga.
The film opens with the camera appearing to track forwards into a ghostly forest. The sense of depth of field and forward movement was likely accomplished by using a multi-plane animation table.  At the end of this sequence, the camera comes to a halt upon an illustration of a giant ancient camphor tree (kusu no ki). Such camphor trees are often seen in Shinto shrines throughout Japan, and the sacredness of these trees is very familiar territory to fans of Hayao Miyazaki’s My Neighbour Totoro (1988) where the giant Totoro lives at the foot of such a tree. In Legend of the Forest, the trees are threatened by the forces of modernity in the shape of a large, burly lumberjack. Birds cry out in protest and take flight, animals scurry down the tree in terror.
The emotion of the scene is increased through the camera panning over the illustrations and cuts to new illustrations and close-ups, for this sequence is not animated. It is a series of illustrations in the style of a children’s storybook (In fact, it reminded me of early to mid-20th century illustrated children's books set in nature like those of Robert McCloskey.) After the panic of the animals is established, the story focuses on a pair of flying squirrels (momonga) whose nest is in the tree that is being chain-sawed. The mother and father desperately try to rescue their tiny, hairless newborn babies one-by-one before the tree falls to the ground. The tension increases until the terrifying moment when the father squirrel loses hold of one of his infants and the baby falls to certain death.
The father’s squirrel’s rage following this moment seems to trigger the film’s transition from storybook montage to animation. Thus begins the film’s secondary layer of story: a journey through animation history beginning with a reference to the 19th century animation toys the Zoetrope and Eadweard Muybridge’s Phenakistoskope.

It is at this moment that the camphor trees come alive as well, with their bark making their faces look wizened and knots turning into eyes. It seems these benevolent trees were watching the flying squirrel family’s struggle and intervened to catch the infant squirrel, gently catching him on one of their leaves. The camphor tree holding the infant, drips some sap down to him in order to give him nourishment.
As the baby squirrel turns his head to drink, the scene moves again from illustration to animation, this time referencing the white on black of early chalk drawing animations of such animation pioneers as J. Stuart Blackton and Émile Cohl. As the baby grows up, we are treated to a wide range of references to key moments in animation history from the early animation of Winsor McKay to Fleischer Studios and; of course, Disney.

Disney was perhaps the greatest influence on Osamu Tezuka and many other Japanese animators of his generation. In addition to the Fantasia influence that I mentioned earlier, Legend of the Forest also references early works by Disney and Ub Iwerks like the Alice Comedies (1923-27), Oswald the Lucky Rabbit (c.1927-28), and Plane Crazy (1928, the first Mickey Mouse picture). When the baby squirrel flies for the first time, the animation style of his flight references Dumbo (Ben Sharpsteen, 1941) – including some rapscallion crows. There are many obvious references to Snow White and the Seven Dwarfs (David Hand, et al., 1937) such as an old crone with an apple and seven dwarfs. The romanticizing of the squirrel’s romance with a purple female squirrel is straight out of Bambi (David Hand, 1942) – a film from which Tezuka also borrowed the theme of corrupt humans destroying innocent nature. 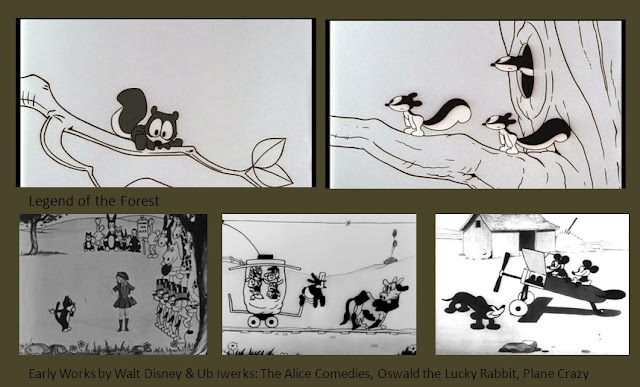 It is this borrowing from Bambi that causes the most flawed aspect of the film. The man vs. nature motif is very heavy-handed and goes to such extremes that it seems unlikely that the film will win over anyone to the cause apart from the already converted. The two main flaws are depicting all of humanity monolithically as a force of evil and destruction and the anthropomorphization of nature. It does nothing for the cause of environmentalism to depict animals of having such human emotions as anger, outrage, and vengefulness. The moment the baby squirrel, now grown, decides to exact revenge upon the lumberjack, the environmentalist message is lost. Following this logic, the only conclusion can be an apocalyptic war between humanity and nature in which everyone loses.

Interestingly, the natural world (and its fairies and other mythological creatures) are animated in a style associated with the cinema – the Disney styled in particular, whereas the lumber town and its inhabitants are depicted in the angular style associated with 1960s and 70s television series and commercials.
The visual concept of the film is certainly ambitious and deserving of the 1987 Noburō Ōfuji Award for excellence in animation. In addition to this the film was featured in Laputa’s selection of 30 Treasures of World Animation deserving of mention that were missing from their list of the 150 Best World and Japanese Animation. I look forward to Macoto Tezka’s completion of his father’s film to see how it fills out the story. The film in its current version is weighted very heavily in favour of American animation history and it will be interesting to see if the completed version fills in some of the gaps in the history of world animation.
As there seems to be a lot of misinformation about this film being cut-and-pasted about the web, I thought I would provide the complete credits for the film as they appear in the film itself:
Scenario, Storyboard + Design: Osamu Tezuka
Art Director: Masami Saito
Sound Director: Takashi Ui
Musical Score: Tchaikovsky’s Fourth Symphony Op. 36
Tokyo Symphony Orchestra conducted by Kenichiro Kobayashi
Key Animation:
Masateru Yoshimura
Junji Kobayashi
Shinji Seya
Toshi Noma
Teruo Handa
Yoshiaki Kawajiri
Yoshinori Kanemori
Shinichi Suzuki
Checking: Kaoru Kano
Illustration: Masaki Katori
Colour Design: Rika Fujita
Special Effect: Takashi Maekawa
Camera: Mushi Productions
Editor: Harutoshi Ogata
Producer: Takayuki Matsutani
Assistant Producer: Minoru Kubota
Director: Osamu Tezuka
Sequence Director: Takashi Ui