Osamu Tezuka’s childhood experiences in wartime Japan indelibly shaped the themes and motifs of his manga and anime. His award-winning animation Story of a Certain Street Corner (aka Tales of the Street Corner/ ある街角の物語, 1962) is the most lyrical expression of Tezuka’s humanist, anti-war sentiments.
It is the first of Tezuka’s jikken animation – or experimental works – which Tezuka made for artistic rather than commercial purposes. Although the animation does employ some unusual techniques such as a POV shot of a plane tree seed flying to the ground, it is not “experimental” in the usual sense of the word. When I think of experimental Japanese animation, I think of Yōji Kuri, Takashi Itō, Naoyuki Tsuji, Mirai Mizue, and others – animators who actually experiment with image, narrative, and sound. Although Story of a Certain Street Corner appears more indulgent in terms of visual aesthetic than Astro Boy (1963-75), it was done using Mushi Pro’s usual practice of “limited animation”: using as few cels as possible in order to keep the budget down. Story of a Certain Street Corner took over a year to complete and was funding by Tezuka’s work as a manga-ka. It was co-directed by Eiichi Yamamoto (Cleopatra

, One Thousand and One Nights

) and Yusaku Sakamoto. Gisaburo Sugii (Night on the Galactic Railroad

) worked as an animator on the film.

The 39-minute animation opens by introducing the central characters one-by-one using title cards – a method dating back to the earliest silent feature films. Living in the attic of a tall city apartment is a young girl with her blue teddy bear. In a hole in the wall of the same building lives a mischievous mouse named Kanku-Bōya and his enormous family. On the street below is an alley way lined by colourful posters. On the corner sits a Platanus – known as a plane tree in English – who is given a delightful sequence in which she releases her seeds. Other star turns are put in by an impish “chinpira” moth, an old street light, and the centerpiece of the film: the figures on the posters themselves.
The setting is a kind of idealized European setting – with a colour palette reminiscent of MGM musicals of the 1950s like An American in Paris

(Gene Kelly/Stanley Donen, 1952). The drama begins when a red balloon escapes from a street vendor passing down the street. It distracts the little girl who drops her teddy bear. The teddy bear gets stuck in the eaves trough, where the little mouse encounters it and mistakes it for being a real animal.

The most impressive sequences of the film begin when the mouse accidentally falls down the downspout and stares dizzily at the posters. One of male figures takes on the role of conductor and leads the others in a musical number. The posters feature romance – between a violinist on one poster and a pianist on another – and comedy. Although the setting is distinctly European in flavour, there are posters that reference Japanese culture, while others play up the comedy of using stereotypes of world cultures such as kangaroos for Australia or bull fighters for Spain. There are also references to world art such as Rodin’s The Thinker (1902) and Toulouse-Lautrec’s famous Moulin Rouge – La Goulue (1891) poster.  The comic effect of this sequence is enhanced by the delightful original music by Tatsuo Takai (who was also responsible for the Astro Boy music). 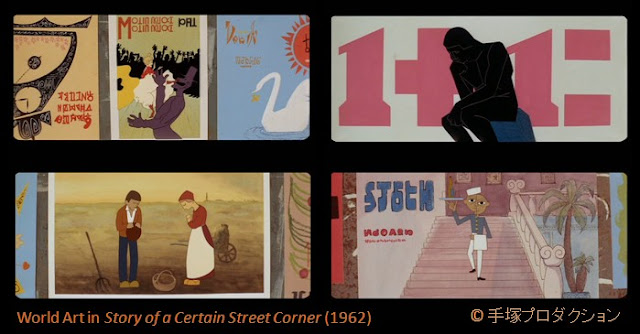 The strongest influence aesthetically to the animation is 1950s graphic design and illustration. The vibrant colour palette is similar to that of the collage work of Ezra Jack Keats (Peter’s Chair

) and both the style and colours are reminiscent of the work of Walt Peregoy. Check out examples of Walt Peregoy and other illustrators from this period at Amid Amidi’s excellent blog Cartoon Modern to see what I mean. 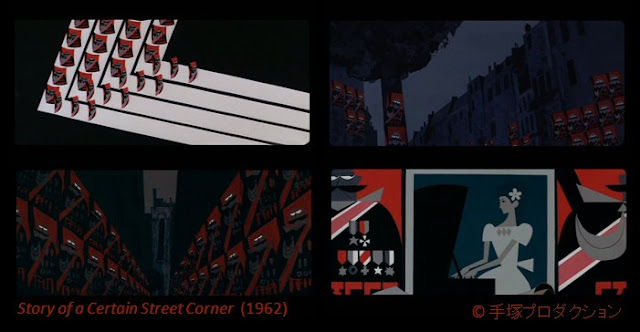 The delightful poster sequence comes to an abrupt halt with the arrival of a pair of military boots marching down the street. The feet stop and hands put up a poster of a decorated military official – in a style that clearly demarcates it as regime propaganda. The other posters are clearly intimidated by this poster and freeze in fear. The mood is briefly lifted again by sequences that feature the plane tree, the moth and the streetlight, and the mouse and the teddy bear in the rain. But the idyll of this romantic street corner is again interrupted by the forces of totalitarian propaganda. Some of the posters  – such as that of the girl on piano and the male violinist  – resist the totalitarian forces.  The papering of posters escalates into full scale war which ends in the destruction of the neighbourhood. Among the rubble, however, there is a fluttering of hope for both humanity and the natural world in form of the young girl being reunited with her teddy bear and the sprouting of the seeds of the plane tree.

This film won Tezuka the first ever Noburō Ōfuji Award, which the Mainichi Film Concours established the year following the death of esteemed animation pioneer Noburō Ōfuji (大藤 信郎, 1900-1961). It is an interesting choice considering the fact that Yoji Kuri had just won the Special Jury Prize at Annecy in 1962 for Clap Vocalism. Kuri would be honoured with a Noburō Ōfuji Award a few years later, but for the inaugural prize, they decided to go with a film with an uplifting social message. The Story of a Certain Street Corner is not only an antiwar film, but also a story about the importance of freedom of expression.