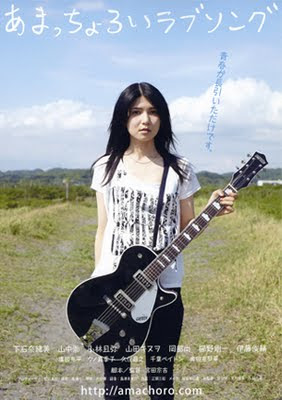 Music is Naomi’s life. She stays up late at night composing “sweet silly love songs” on her guitar. Her music distracts her from her day job as a waitress in an Italian restaurant and even from enjoying sex with her boyfriend. However, her passion has yet to transform itself into success in the music industry and during the course of Sohkichi Miyata’s Sweet Silly Love Song (あまっちょろいラブソング, 2010) we will follow Naomi on her journey to decide whether or not to continue pursuing her music or to give it up entirely to follow a more predictable working class life.
Sweet Silly Love Song is a kind of a coming of age story. . . but for thirtysomethings rather than teenagers. Naomi – or Nao-chan as her friends call her – has reached that stage in life where her peers are starting to get married and settle down. For many of her friends, that has meant giving up their passion in life for a steady, salaried income. Her boyfriend, Kobayashi-kun, has sold his camera in order to afford business suits. Her school friend Ryoko has decided to turn a blind eye to her old boyfriend Takeda’s failings in order to marry and have children. Even her most loyal musical collaborator Hisao, the bass player in her band, is quitting music in a last ditch effort to try to regain the affections of his girlfriend Miyo.
Naomi’s story unfolds at an unhurried pace, with Miyata’s camera preferring to observe from a distance in a series of long takes with very few close-ups. The soundtrack is also quiet apart from Naomi’s haunting music. Each scene reveals another layer of depth to Naomi’s character: her generous spirit, her quiet determination, her acceptance of life’s trials. Is life really just “one disappointment after another” as Naomi fears, or can one break out of this downward spiral and find happiness?
Miyata’s script has a few minor weaknesses in it – like the lack of female confidantes and family in Naomi’s life – but on the whole the film is able to stay believable thanks to the unwavering performance of musician Naomi Oroji (follow her on Twitter) in the role of “Naomi”. The supporting cast are also strong including Takashi Yamanaka (Fish Story

) as Naomi’s high school surfer boyfriend Arai.
Perhaps the strongest element of Miyata’s script is his use of trains as metaphors for the choices we have to make in life. Visually, this motif is in the film from the very beginning. It is foregrounded by a conversation that Naomi has with Hirano – the MC from Ryoko and Takeda’s wedding. Hirano has also had to put aside his dream of becoming a successful musician in order to get by in life, but he still clings onto the hope that one day he can make a success of his music. Our journey in life is like being on a “strange train” (変な電車/hen na densha), he explains. Naomi has the choice of staying on the more predictable journey through life, or she can choose to change trains and face the strange and wonderful challenges presented by following her heart.
This film was released in Japan in 2010 and had its international premiere at the Japan FilmFest Hamburg in May.  It is director Sohkichi's Miyata's third feature film after his award-winning Baka Vacance (バカバカンス, 2008) and Sebastian (セバスチャン, 2009).
Posted by Cathy Munroe Hotes at 6:56 pm