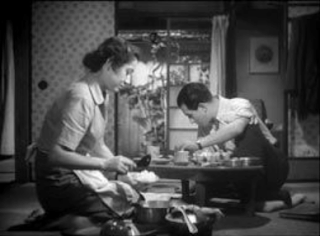 Women form the central concern of the films of Miko Naruse (成瀬 巳喜男, 1905-1969). Women play the main protagonists, the thematic concerns usually revolve around issues concerning women, his audiences were mainly women, and the narratives are often based on stories by women writers. Naruse’s 1951 hit film Meshi (めし/ Repast) is adapted from the final, unfinished novel by popular writer Fumiko Hayashi (林 芙美子, 1903-1951). He would later to go on to make five other films based on her literary output including Hourou-ki (A Wanderer’s Notebook, 1962) which was based on her autobiography.

If I were a teacher of Japanese, I could imagine using Naruse’s Meshi to teach students about one radical difference between men and women in Japan: the use of language. The different usages of language between men and women in Japanese is apparent in all family dramas, but in Meshi it is foregrounded by film’s title, which is also a key motif throughout the film. The difference between men’s and women’s Japanese rarely comes across in the subtitles because it is difficult to translate. The translators of Meshi had a real problem translating the title in particular and I’m not sure that they were successful. ‘Repast’ is a rather formal-sounding French loan word and it's in my estimation, a bit of an archaic word for a meal in English. In contrast, the Japanese word ‘meshi’, as I will elaborate in a moment, is very informal. I can’t really criticize whoever came up with the title ‘Repast’ though, because there would also be the complication of the different usages of words for meals among different regions of English speakers (supper and tea have very different meanings depending on what side of the Atlantic you are one for example). The noun ‘meal’ itself also has multiple meanings just to add to the translation difficulties.

In Naruse’s subtle depiction of a marriage, the husband Hastsunosuke ‘Hatsu’ Okamoto (Ken Uehara) often uses very blunt expression ‘Meshi ja nai ka’ to ask his wife Michiyo (Setsuko Hara) if supper is ready yet. It would be similar in English to a husband asking his wife ‘Isn’t supper ready yet?’ in a tone that implies that the meal should already be on the table. After five years of marriage, the shine has worn off. Their relationship is strained due to troubles making ends meet and Hatsu, worn out from his job, doesn’t see how the long, lonely days working as a housewife are affecting Michiyo. Her one solace is in the scraggly, tail-less cat who seeks her affection.

Michiyo’s feelings about living in Osaka are emphasized through the theme of ‘meshi.’ She finds that the imported , overpriced rice sold by a local woman tastes funny and longs for rice from back home. Without family in Osaka, Michiyo has grown tired of the endless chores of cooking and cleaning and wonders if she should return to Tokyo and find work for herself. Her husband works long hours and has become distant from her, leading her to lavish all her love on a mangy, tail-less cat.

The catalyst for change comes in the guise of a niece, Satoko, who drops in unexpectedly from Tokyo. Satoko has come to escape her parents and their marital expectations of her and seems to have a little crush on her uncle. Flirty, young, and naïve, Satoko’s presence reminds Michiyo of the woman she used to be, as does a reunion with her Tokyo friends. These women are important because they show the limited chances women had in the 1950s. Each suffers from their own situation (single vs. married) and thinks that the others have it better. After this interlude with her friends, Michiyo comes home to find that Satoko and her husband have done very little to contribute to the day’s chores and she decides that the time has come to make a change in her life.

From a modern perspective, Hatsu seems like a real jerk of a husband and in a lot of reviews of this film, Hatsu is described as being a stereotypical patriarchal husband. Thinking about him in the context of 1950s Japan, I actually found him quite a sympathetic character – especially when contrasted with the husband in Yama no Oto (Sound of the Mountain, 1954), another Naruse film starring Ken Uehara and Setsuko Hara as a couple with marital problems. Hatsu shows early signs of being a good guy – although he is curt in the usual way with his wife, he shows great patience when she’s angry with him and never responds with anger himself. Apart from his lack of contribution to household chores (which is sadly even today typical behaviour for men in many Japanese families), he also shows good judgment for the most part throughout. For example, he is always honest with his wife, telling her where he goes and with whom. He does not spend money overly rashly and avoids bad business decisions (ie the Marugaki scheme) despite heavy peer pressure. He also seems completely oblivious to the women who throw themselves at him during Michiyo’s absence.

While Naruse does give the husband’s perspective lots of screen time, our thoughts are never far from Michiyo. Unlike Fumiko Hayashi’s unfinished novel, which was written in the first person, Michiyo’s motivations throughout the film seem deliberately ambiguous. In doing so, Naruse allows his audience to use their own experience to interpret Michiyo’s actions and thoughts. This is only broken in the final scene on the train (no spoilers follow), where Michiyo is given a voiceover narration that explains her ultimate choice. This final scene was reportedly tacked on by the studio producers, much to the dismay of many critics. I think that it could have been left ambiguous with no voiceover dialogue. For me, the scene in the restaurant with Michiyo and her husband made the ending satisfying – especially when Michiyo laughs through tears as only Setsuko Hara can. This is a film that can be really appreciated by people, especially women, who have been married for a long time because it asks its audience to consider what happiness in marriage really means to them.