Akira Kurosawa: a Century of Cinema 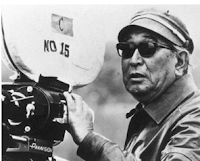 The Venice Film Festival will be celebrating the centenary of the birth of Akira Kurosawa a few months early with a panel on Monday. The discussion will feature a number of prominent guests including Peter Cowie, Donald Richie, Teruyo Nogami, Michel Ciment, Richard Corliss, and Italian critic Aldo Tassone. Here is the blurb from their website:

To mark the imminent 100th anniversary of his birth, the great Japanese director Akira Kurosawa will be the subject of the international panel that will be held at the Venice Lido on Sunday September 6, 2009 at 3 pm in Sala Pasinetti (Palazzo del Cinema), organized by the 66th Venice International Film Festival (2-12 September) and moderated by Peter Cowie, film historian, author and founder of The International Film Guide.

On 23 March 2010 Akira Kurosawa would have been 100 years old. Given that his discovery in the West came as a result of the Golden Lion he won at the 1951 Venice Film Festival with Rashomon, and that the festival awarded him a Golden Lion for Lifetime Achievement in 1982, it is significant that his profile and his achievements as a filmmaker should be discussed in Venice this year.
The participants in the meeting chaired by Peter Cowie (Great Britain) will include some of the world’s best-known experts on Kurosawa’s work, such as Teruyo Nogami (Japan, writer and for many years Kurosawa’s chief assistant), Donald Richie (United States, writer, director and critic, authority on the culture of Japan – where he has been living since 1947 – and author of the ‘definitive’ study of Kurosawa, as well as firsthand witness to a half-century of his activity), Michel Ciment (France, writer and critic, editor of the magazine Positif), Richard CorlissTime) and Aldo Tassone (Italy, critic, director of the France Cinéma festival and author of several books on Kurosawa). (United States, critic for the weekly

The panellists will address the multiple aspects of Kurosawa’s figure and work, including: his vision of society and politics; the comparison between Kurosawa and the other great Japanese filmmakers; his relations with Eastern and Western culture (Shakespeare, Gorky, Dostoevsky, van Gogh); the enthusiastic reception given to Kurosawa by American culture and cinema; comparisons with other great Japanese auteurs such as Ozu and Mizoguchi; their numerous remakes; his sources of inspiration in Japanese culture; Kurosawa’s work on the set; his talent as a painter; his use of colour and music; the difficulty he often had in getting funding for his films in Japan; his love of history and the lessons that he has offered to each new generation.
For more information, go to the offical website.