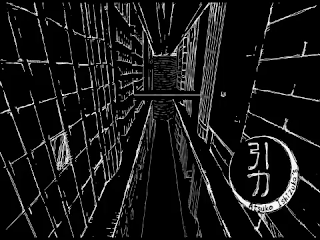 During her days as a student at Aichi Prefectural University of Fine Arts and Music, Atsuko Ishizuka (いしづか あつこaka 石塚敦子, b. 1981) made some animated shorts that caught the eye of both the NHK and Madhouse (her employer since graduation). Gravitation (引力 /Inryoku, 2003) was one of them and it was featured that same year by the NHK on their Digista program. 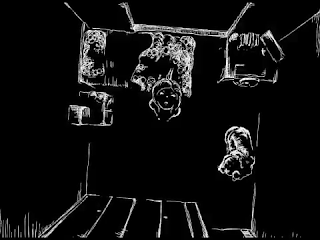 An example of her uses of extremely high and low angles.
Gravitation is a dream-like film in which a young woman rises out of bed on a dark night and finds her hair being pulled strangely upwards as if the moon had some kind of gravitational pull. The girl steps outside and rides a glass elevator up the side of a skyscraper. From the perspective of the top of the building, she looks down at a cityscape reminiscent of Fritz Lang’s Metropolis (1927) and witnesses an old-fashioned car crashing on the side of the expressway. The shards of glass float up as if being pulled by the same moon gravity as the girl’s hair. Soon, the girl’s dog and the car are all being pulled upwards as well. The girl falls from the building only to have the force from the moon suddenly pull her in the other direction. As she jets towards the moon, she is able to rescue her dog and holds him in her arms. The film ends with a spinning close up of the girl holding her dog and as a mass of flowers swirl past her and gather around the moon, nestling it like a ball that has fallen into a rich garden of flowers. 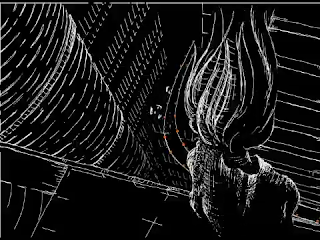 The only hints of colour are the streetlights of this Metropolis-esque setting
(notice how her hair is being pulled by the moon's force)
I find this film visually captivating. The main reason for this is Ishizuka’s striking, yet minimatlistic use of white on black with only a hint of yellows and reds for the streetlights. In some scenes, such as when the girl’s hair begins to be pulled by the gravitational force of the moon, the sketched white lines are finely filigreed as if made from the silk of a spider’s web. Ishikawa plays with unusual and interesting camera angles and distances. It’s a fascinating mixture of the cute (the girl and her puppy dog), the eclectic (a pre-WWII car), the futuristic (the setting), and the surreal (the gravitational pull of the moon, a sky full of flowers). 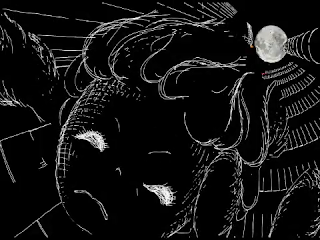 An extreme close up as the girl soaring through the air - notice the moon in the background.
The mood of the piece is enhanced by the compelling musical score composed for the film by Yoshiyuki Yamada (山田善之 – at least I’m guessing it’s Yoshiyuki – I can’t find him on the web to confirm the reading of his given name). There are a number of stylistic elements and motifs in Gravitation that get repeated in her NHK short Tsuki no Waltz (月のワルツ, 2004). The female protagonists look very similar in the face and hair and character movements. The moon is repeated as a main motif in both films, and she also repeats the image of flowers filling the starlit sky.  There are so many similarities that I wonder if the NHK suggested that she repeat these elements in her first Minna no Uta project. 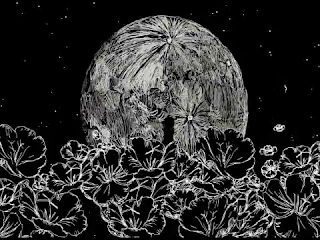 The moon in a nest of flowers - the flower motif gets repeated in Tsuki no Waltz.
A beautiful film full of the promise of good things to come for Ishizuka’s future as an animator at Madhouse. More on that tomorrow when I review Tsuki no Waltz.


Madhouse Projects that Atsuko Ishizuka has worked on: