The collaborative art team Tochka (トーチカ) has had a distinctive online presence for many years now.  Their creative method of animating with light has inspired many artists around the world to make their own lightning doodles from Lichtfaktor here in Germany to the artists behind the 2007 Sprint commercial. Tochka’s short videos have been shared extensively on the internet, but CALF’s second volume in their DVD series Japanese Independent Animators gives fans a sense of the history of the PiKA PiKA Lightning Doodle movement.  Like Maya Yonesho's Daumenreise and Rinpa Eishidan's videos, Tochka's PiKA PiKA  films belong to the tradition of collaborative art.

Takeshi Nagata and Kazue Monno, the creative duo that make up Tochka – came up with their lightning doodle animation method in 2005 and christened it PiKA PiKA. The Japanese language is replete with evocative onomatopoeias – words whose sound suggests their meaning  – like "buzz buzz" or "drip drop" in English.  “Pika pika” (ピカピカ), as any fan of Pikachu from Pokemon can tell you, is associated with lightning or flashes of light.

The seemingly magical images of people drawing with coloured lights is actually fairly easy for the amateur animator to achieve. In fact, Tochka came up with the method as a way of teaching the principles of stop motion animation to a workshop that ranged in ages from 3 to 60. As the accompanying booklet explains, one only needs a camera with long exposure capabilities, a flashlight, and a nice black background. While the shutter is open, the “animators” draw shapes repetitively in the air with their flashlights. When the images are played back consecutively at normal speed, the light animation comes to life.

The use of drawing with light in photography is believed to have originated with the avant-garde artist Man Ray in 1935 when he used his pen light to create the self portrait Space Writings (check out the interactive material accessing this work at The Smithsonian). Another famous practitioner of light animation in photography was Pablo Picasso, as you can see in his collaborative photographs with Gjon Mili (examples here and here).

Tochka has taken the artistic concept of photographing points of light at a low shutter speed and married it to contemporary technologies and to their political beliefs in the democratization of art and the use of art to bring people of all walks of life together in a harmonious activity. Their films are not only animations, but also a documentation of their travels around the world where they collaborate with school children, artists at festivals, and even just people they meet while walking the streets of neighbourhoods from Indonesia to Canada. They also use music by local artists on the soundtracks which adds to each film’s flavour as a document of a particular place and time.  This interactivity between filmmakers, musicians, participants, and viewers is truly unique.

Their marriage of their light doodles with music reminded me of Norman McLaren’s imaginative film Boogie-Doodle (1941). A further reminder of McLaren came while I was viewing the “Jumping” section of their PiKA PiKA in Yamagata (2008) video. McLaren’s Oscar-winning film Neighbours (1952) used an animation technique which Grant Munro coined pixilation where people are essentially transformed into stop motion puppets. The Jumping sequence in PiKA PiKA in Yamagata takes the Jumping sequence from Neighbours and multiplies it by more than a dozen as you can see in these screencaps: 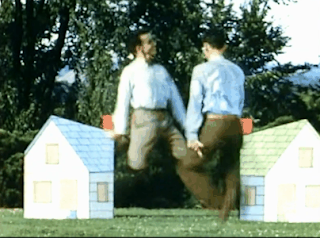 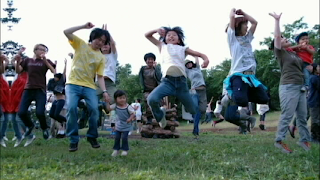 Tochka’s PiKA PiKA films are fun to watch and look as though they were fun to make by the participants. It’s like an animated form of mural-painting or graffiti art.  This was suggested to me by their compilation film PiKA PiKA (2007) which has scenes where both graffiti and lightning doodles are being created simultaneously.

The behind-the-scenes footage of their shoots in the Osaka neighbourhood of Naniwa-ku earlier this year demonstrates how PiKA PiKA can be used in a positive way to document the people and places of a neighbourhood. While in their early films the faces of the “animators” with the lights were obscured, in this footage they light the faces of the local people they encounter during the night shoots while they frame them with lightning doodles. This documentary footage is particularly magical for the way that it shows the transformation of the participants from portrait subjects to active participants. The delight on their faces to see the results of the animation process played back to them from a laptop is truly a joy to behold.

Another element of Tochka’s work that I enjoy is their foregrounding of the process of animation and the tools they use to achieve it. This seems to belong to their desire to share art, rather than simply being privileged practitioners of it. The opening sequences of their films often document the people and the process they used to make the film. For example, The Lovely Memories (2009) is a documentary of an artistic workshop, an animation, and a loving tribute to Lomography cameras (famed for their colourful, soft focus images) all rolled into one (read an interview with Tochka about shooting with the Diana F+ and Instant Back).

This DVD is by no means a complete works of Tochka who have done a wide range of stop motion films over the years for both commercial and artistic purposes. The DVD’s main focus is the PiKA PiKA output since 2005. However, in the special features section of the DVD they do include one of their early stop motion animations Build (2001) which screened on a massive wall in Kobe to commemorate the earthquake – it is a disturbing and fascinating film which playfully references early computer games like Pong and Tetris.

Other extras include a slideshow of 100 PiKA PiKA stills and a behind-the-scenes featurette of a PiKA PiKA workshop at Suito Osaka (2009,. There is also a short snippet shot for Design Tide (2007), a long edit of PiKA PiKA in Indonesia (2008), and the trailer for PiKA PiKA in Kanazawa (2008). 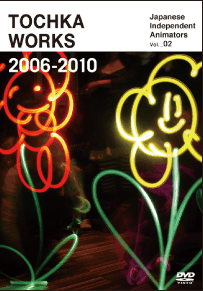 Tochka Works 2001-2010 can be purchased online at CALF. The shop is currently Japanese only but an English version is in the works. Alternatively, try contacting them via e-mail or Facebook. The DVD is bilingual Japanese – English.  To learn more about Tochka, visit their homepage.