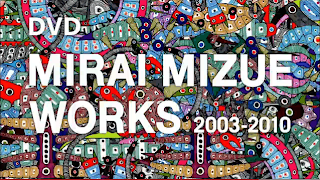 Mirai Mizue’s debut animation Fantastic Cell (2003), which he made during his student years at Tama Art University, was extremely well-received by the animation community. In this film Mizue debuted his distinctive “cell” animation (not to be confused with cel animation) style in which he uses an organic cell as the base shape of his abstract figures. The cells join together or split apart forming a wide array of creatures from the smallest amoeba to jellyfish and finally into a humanoid creature. The original film used the distinctive sounds of Tchaikovsky’s “Waltz of the Flowers” from The Nutcracker Suite. Unfortunately, CALF was unable to afford the rights to the music for the DVD, but one can enjoy the full experience by playing the video from Mirai’s website simultaneously with the DVD video.


Mirai’s pairing of animation with music is reminiscent of the ground-breaking films of Oskar Fischinger and Norman McLaren. Mizue himself had actually not yet seen the work of these two artists when he made Fantastic Cell, and he points to early Disney films like Fantasia (1940), The Old Mill (1937), and Toot, Whistle, Plunk and Boom (1953) as having influenced his interest in the relationship between animation and music. The Fantasia influence is certainly apparent in his choice of music as it also features Tchaikovsky’s “Waltz of the Flowers”.


When I first encountered Mirai Mizue’s work on the internet I mistook it for CG animation. His illustration style is so detailed and precise, that one can hardly believe that he has hand drawn every single frame. Furthermore, the digital artifacts produced by low resolution uploads blurred the detail that mark the work as being hand drawn. The high-resolution of the CALF DVD allows the viewer to see every detail of the image as the artist intended it and the result is spectacular. Check out the trailer:


In the Special Bonus Interview feature on the DVD, there is a wonderful timelapse sequence showing Mizue’s process for his “cell” animations. He begins by outlining the images with a pencil then fills them in with aqueous pens (black and colour). The images are then scanned and edited into an animation on the computer. He never uses the computer for paint work – even though his geometric animation such as Modern (2010) and Metropolis (2009) are actually well-suited to computer animation.

In addition to geometric animation and “cell” animation, Mizue has also been dabbling in what he calls water-surface animation. He first attempted this in 2003 in a film called Minamo in which he set up a camera over a water tray with an illuminated white background (presumably an animation table) and experimented with the flow of aqueous ink over the surface of the water. He manipulated the ink by blowing with straws or stirring with toothpicks and used stop motion animation techniques to shoot the resulting effects. Not satisfied with this first attempt, he tried again in 2009 with the film Blend. This time, he used oil ink in order to see if he could control the stream of ink better. He modestly claims in the DVD booklet that he is still not satisfied and will continue refining his techniques, but these were among my favourite films on the DVD. While the kaleidoscope-like effects are fascinating, I particularly enjoyed the close up shots of the swirling ink. In combination with the experimental score, the effect is mesmerizing.

The DVD also includes a very different type of experimental film Adamski (2008) which he shot along the Tama River. Citing Jan Svankmejer as a key influence on him as an animator, I believe that the film’s title is a reference to George Adamski, the man who claimed to have taken photographs of UFOs. This supposition is bolstered by Mirai’s statement that he wanted to shoot a film from the POV of a UFO. Like a Takashi Ito film, Adamski is made up entirely of a series of photographs which he shot all on one day. Mirai draws connections between the various graphic patterns made by fences, hydro lines, and buildings in the area. In this animation he also demonstrates a fascination for various textures: leaves in a gutter, pebbles, flowers in a garden, rope – it is a truly poetic film visually.

The real centerpiece of the DVD for me is his film Jam (2009) which takes the “cell” animation techniques that he uses in Fantastic Cell (2003), Lost Utopia (2007), and Devour Dinner (2008) and ramps it up a couple of notches. In the liner notes he explains that he had been disappointed in the quality of his animation for Devour Dinner, which had been made to deadline. With Jam he challenged himself to make a film that made movement the centerpiece of the film.


Watching Jam on a big screen can be an overwhelming experience because, as the title suggests, the “cell” creatures are literally jammed onto the screen. Every inch of the screen is filled with creatures big and small who wriggle and slide in time with the music. The concept behind the film is that the more increasingly varied the soundtrack becomes, the greater number of creatures and movement should be on screen. It begins with a limited pallette of black, white, and red, and increases the colours as well as the movement endings in a symphony of shapes, sounds, and movements. This is a film that requires repeat viewing in order to fully take in the complexity of the illustrations.


One of his latest films Playground (2010) demonstrates how keen Mizue is to hold onto his signature visual style of “cell” animation, while at the same time challenging himself to keep evolving as an artist. Playground has a much softer look than his earlier cell films because he used a paint brush with India ink in addition to his aqueous pens. He speaks in the liner notes of having been influenced by the paintings of Joan Miro that he saw in Barcelona. To be sure, the influence of Miro is there in not only his commitment to abstract image and movement, but also in his choice of colour palette. The varied selection of animation Mirai has produced in his early years as an artist makes for very inspired viewing and bodes well for the future of art animation in Japan. 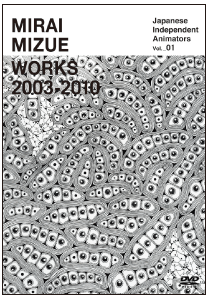 Mirai Mizue’s DVD can be purchased for the very reasonable price of ￥2,800 (in comparison: Ghibli DVDs cost almost ￥5,000 apiece) at CALF’s ONLINE SHOP – which is currently only available in Japanese but will be made available in English in the near future. The DVD itself is fully Japanese-English bilingual and region-free.