Since moving to Germany in 2007, it has been a challenge for me to improve my German vocabulary when my reading and movie watching is so biased in favour of Japanese culture. One way I have managed to combine the two is by reading manga in German. At a wonderful manga/comics shop in Marburg last year, I discovered the beautifully illustrated graphic novels of Jiro Taniguchi (谷口ジロー, b. 1947). Many of his best works are published in Germany by Carlsen in elegantly bound editions that easily share a bookshelf with my Random House Vintage Classics editions of Japanese literature. 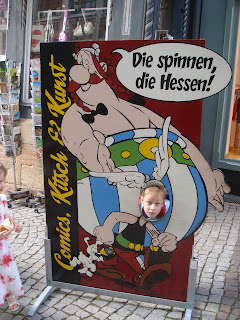 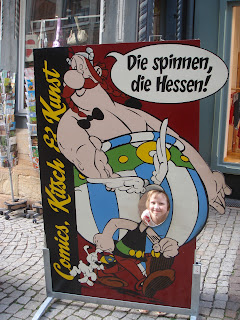 Comics, Kitsch & Kunst - if they added DVDs
they would be selling everything I could ever possibly want
Originally published in Japanese in 1998 as Haruka na Machi e (遥かな町へ), this graphic novel was published in German under the title Vertraute Fremde

in 2007.  In English it has been published in two volumes under the title Distant Neighbourhood

. It tells the story of a middle aged architect Hiroshi Nakahara. On his way home to Tokyo from a business trip to Kyoto, he accidentally boards the wrong train and dozes off on it. When he awakes, he discovers that the final station on the route is the town in which he was born: Kurayoshi. Nakahara decides to take advantage of his error by visiting his mother’s grave for the first time in many years. As he prays in the cemetery, a butterfly appears to indicate that a transformation is about to take place and Kurayoshi loses consciousness.
When Kurayoshi awakes, he finds that he has been transported back in time to the spring of 1963. As he readjusts to being back in his 14 year old body, he goes to his family home to find his mother and grandmother alive just as they were in 1963. Most significant is the fact that his father is also there. It is then we realize the significance of the spiritual journey that Hiroshi Nakahara is taking. He has arrived in the past just a few short months before his father will disappear from the family forever without a trace. His father’s unexplained betrayal of his family has haunted Nakahara ever since and he now has an opportunity to find out why his father left. . . and possibly even change the course of history by trying to prevent the inevitable from happening.

The story exposition in Distant Neighbourhood is very compelling and the first time I read it I could not put it down until I had finished it. As an illustrator, Taniguchi’s attention to small details of the scenery and framing is as carefully done as in a Yasujiro Ozu film. During the opening sequence as Nakahara passes through Kyoto station, I recognized the station immediately because the architectural details were exactly as I recall them as I passed through the station myself in 2006. I would imagine that for someone of the same generation as Taniguchi Distant Neighbourhood would be a nostalgic trip down memory lane. The streets of Japanese towns, and even the layout of the countryside has altered considerably over the past four decades. Sights such as the grandmother working away at the loom or kids riding a scooter without helmets have become rare indeed with the passage of time. Subtle details remind us of the time period such as a reference to the professional wrestler Antonio Inoki, who was popular at the time, and a movie poster for the Hollywood film Lawrence of Arabia

(David Lean, 1962). The story even takes us back further to wartime Japan when Nakahara’s parents met.
Earlier this year, Distant Neighbourhood was adapted into a film set in France by the Bavarian director Sam Garbanski. It is called Vertraute Fremde here in Germany, and Quaritier lointain in French.  I actually do think that the essence of this story could translate well to Europe during the same time period so I am hoping that Santa puts a copy of it in my stocking this year. It also stars one of my favourite French actors – Pascal Greggory – which is an added bonus. When I do get a hold of a copy, you can be sure that I will report my findings here on the blog.

Here's the German trailer:
And the French trailer: