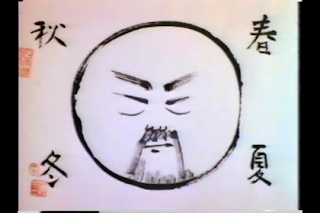 I first heard about Animated Self Portraits (David Ehrlich, et al., 1989) with the discovery of Kihachiro Kawamoto’s contribution to the omnibus short film on Geneon’s DVD of Kawamoto’s short films. I then discovered Osamu Tezuka’s contribution on the Geneon DVD of Tezuka’s experimental films and started searching to learn more about the Animated Self Portraits.
Not only was I interested in the context of these short contributions by two of the greatest animators to come out of Japan, but I knew that pioneer experimental animator Renzō Kinoshita (木下蓮三, 1936-97) had also made an individual contribution to Animated Self Portraits. As far as I am aware, Kinoshita’s work is not yet available on DVD despite his important contributions to independent animation in Japan.
I recently managed to get a hold of a copy of Animated Self Portraits and was at last able to compare Kinoshita’s conception of the animation process with that of Kawamoto and Tezuka (links below to my reviews of those shorts). Kawamoto depicts the creative process as an on-going struggle between the artist and his medium, with the medium having just as much a say in the process as the artist himself. Tezuka compares the creative process to a game of chance, suggesting that when all the pieces line up the results can be lucrative for the animator. 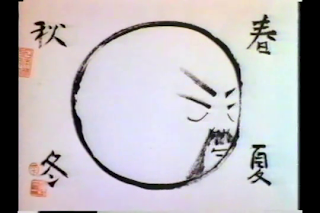 Kinoshita’s Self Portrait emphasizes the importance of Japanese artistic traditions on his creative process. The short begins with an image of the Kinoshita’s own face, painted round like the sun on the Japanese flag, with the Chinese characters for the four seasons in each corner of the frame. The simple black on white looks like it has been done in the traditional brush and ink style. On the left side of the frame there are three red stamp impressions, like those that artists use to sign their work in Japan. The version of the film that I have is low resolution so they are difficult to make out, but the the oval one definitely looks like it reads Kinoshita (木下). 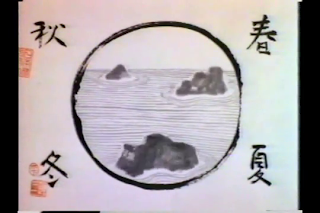 Kinoshita’s eyes are closed, as if he is deep in meditation or sleep. His head rotates to right and in the circle that one presumes is the back of his head, an image of some rocks jutting out of the sea appears. This is followed by an image of the animator sleeping on the ground wearing a kimono appears. It would seem that we are being invited into the world of the animator’s dreams and imagination. 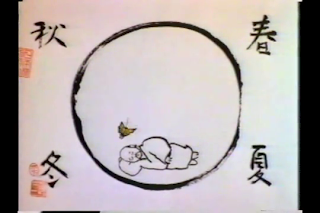 A lone butterfly, in full colour, flits about the sleeping Kinoshita’s head. The butterfly is an important symbol in Japanese culture – representing not only transformation but also the human soul. In the next moment cherry blossoms fall upon the sleeping artist. This is followed by a nude woman with long flowing hair who jumps elegantly over Kinoshita.
The caricature of Kinoshita then awakes, looks around, and raises himself to seating position while comically adjusting his kimono. His eyes seem bleary, with bags underneath them – no doubt from the long hours an animator must put in at the animation table. This miniature caricature of Kinoshita disappears and the large image of his face rotates back to centre frame.  Thus the film ends as it began. The entire short is approximately 30 seconds. 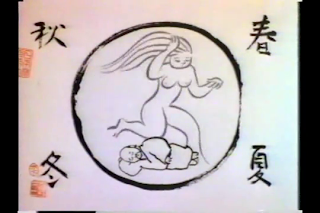 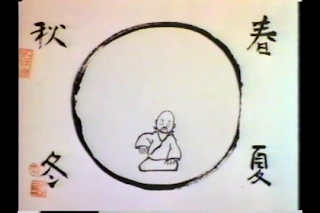 Of all the international animators represented in Animated Self Portraits, Kinoshita’s is the one that most strongly identifies itself with national identity. This is interesting because much of Kinoshita’s early work, such as Made in Japan (1972) was quite critical of contemporary Japanese culture. Renzo Kinoshita and his wife Sayoko are known in Japan for the hard work that they put in building international connections between the Japanese animation community and the international animation community. They put in a lot of time and effort into the Japanese branch of ASIFA, and later to founding the International Animation Festival Hiroshima. However, their efforts were not always appreciated and, according to an interview with David Ehrlich that he published after Kinoshita’s premature death (in John A. Lent, ed. Animation in Asia and the Pacific,

2001, pp. 51-4), the Kinoshitas actually considered moving permanently to New York city in the early 1980s. Kinoshita’s Self Portrait suggests that even if they had done so, he still at heart considered himself a Japanese artist.
I like the way the short draws the connection between dreams and animation – animation really is a medium that allows the artist to depict the world of dreams in all its sensuousness of movement and surreal connections. Water is an element heavily associated with the unconscious mind, which is why I think it is the first image that we see when Kinoshita transitions into the world of his imaginary. The film suggests that Kinoshita felt strongly influenced by the beauty of the natural world and the human form. The animation is beautiful in its simplicity, and the subtle humour in the depiction of Kinoshita in caricature tells us a lot about the modesty of the animator himself. 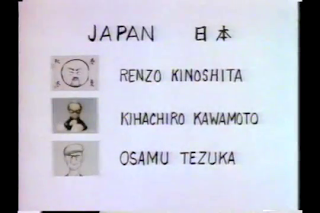 Credit card for the Japanese contributors to Animated Self Portraits (1989)
Related Posts:

The Self Portraits by Kawamoto and Tezuka are available on these DVDs by Geneon: