For me, the best documentaries are those in which the documentary process follows not only the journey of an individual or an event, but also documents the personal journey of the filmmaker themselves.  With A Normal Life Please (フツーの仕事がしたい/ Futsū no shigoto ga shitai, 2008), Tokachi Tsuchiya makes his presence known via first person overdubbed narration, telling us the story of truck driver Nobukazu Kaikura as he saw it unfold through the lens of his camera.  Both documentarian and his subject are the same age (36 at the time of filming in 2006), and both have experienced losing their jobs.
Straight off the bat, we learn that the director is an accidental tourist during the early events of the film. Kaikura works as a driver for sub-contracted company Toutou, which delivers cement for a much larger corporation Fucox. By using sub-contractors instead of hiring drivers themselves, Fucox avoids having to pay living wages or benefits to the drivers. Instead of receiving an hourly wage, the drivers are paid according to how much they deliver. This results in the drivers working hours than on paper sound just impossible. In order to change things, Kaikura joins a union, who in turn hire Tsuchiya in order to document Kaikura’s working conditions. 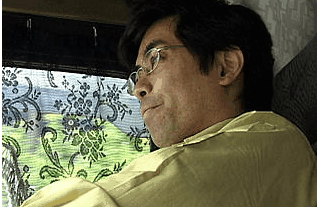 A cursory evaluation of Kaikura’s documented work schedule reveals that in one month alone he drove his cement truck for 552 hours. This meant that he had only 5.7 hours on average every day to eat, bathe, and sleep. By the time Tsuchiya’s camera arrives on the scene, this extreme work schedule has already had a detrimental effect on Kaikura’s health and that of his parents with whom he lives. It also means that he has hardly any social life to speak of, and sees no prospects of finding a partner with whom to start a family - the 'normal life' of the film's English title.

For the public at large, there is a great risk to the safety of Japan’s highways. The documentary tells of one case in particular in which a sleep-deprived truck driver caused an accident that took the lives of the innocent occupants of another vehicle. The drivers are shown in the film to not just be taking risks in terms of how many hours they are on the road, but also in overloading their trucks, thus making them even more of a highway hazard.
The real turning point in the film comes at the funeral of Kaikura’s mother. A thug, hired by the company, comes to the funeral with his goons in order to pressure Kaikura into leaving the union. Tsuchiya’s camera captures the ensuing violence in vivid detail.  The filmmaker also becomes an active participant when he gets physically assaulted for refusing to turn off the camera.
After this attack it becomes clear that Kaikura blames his working conditions for adding to his mother’s ill health and subsequent death. The mourning of his mother is a powerful visual symbol in the film. We see Kaikura’s father praying at a makeshift family shrine because the family does not even have enough money to afford a butsudan (see my review of Toad’s Oil for an explanation about what a butsudan is). This incident serves as a catalyst to strengthen what Tsuchiya had previously seen as Kaikura’s weak resolve to truly stand up for his rights.
Although Tsuchiya appears rarely on camera, his story as a documentarian serves as an important subplot.   His footage is also quite pivotal within the film as it is used by the union to try to name and shame the concerned people and companies.  The film documents Tsuchiya's shift from being an impartial observer of Kaikura’s life to having an active concern in his welfare.
Tokachi Tsuchiya belongs to a politically motivated filmmaker’s collective called Video Act, established in 1998 by Yutaka Tsuchiya, which seeks to document social injustice in Japan. Other films associated with Video Act include Horoki Iwabuchi’s Sounan Furiitaa (遭難フリーター/ Freeter’s Distress).  A Normal Life Please is an impressive documentary which deserves a much more widespread release. It has won best documentary honours at the 2009 Dubai International Film Festival and the 17th Raindance Festival.
Before I sign off, I just wanted to share some of the information I learned during the Q&A with Tsuchiya at Shinsedai. On the whole, Tsuchiya struck me as an individual who is extremely passionate and articulate about the rights of the workers of Japan. He was impressively well educated on the topic of unions and talked at great length about the facts and figures surrounding not only the events of that took place during the filming of his documentary but also the greater cultural context within Japan. Other information gleaned from the Q&A:
Other great documentaries: