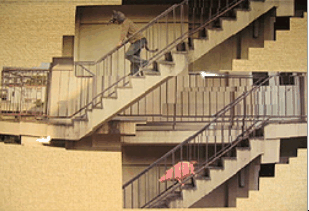 Collections of short animation at film festivals are usually hit or miss affairs. This is particularly true when the assembled films are all by students or first time animators. Not so in the case of Digista, which is sponsored by the NHK. The assembled shorts which screened at Nippon Connection on Friday were all of a very high quality.

Digista is an abbreviation of ‘Digital Stadium’. The name of the program is slightly misleading because the films are not necessarily produced digitially. Rather the forum for screening (television) is digital. The films actually represent a wide range of animation styles including watercolour, cel, puppet, pixilation, and CG.

Speaking to producer Hiroko Namba of Directions (producers of Yasuhiro Yoshiura’s Time of Eve, among other projects), at the festival I learned about the process by which the Digista films are chosen. First a ‘curator’ is selected. The curators are already established artists. First time animators are then invited to send their work in to the curator for consideration. The curator then selects the best work for screening. The Digista films are screened on Saturday night at midnight on BS2 and repeated Monday night at 1am and Friday at 11pm on BShi. They can also be screened on the NHK website and on Youtube.

The Digista program has an excellent track record for discovering new talent. Previous animators featured on the program include Richiro Mashima, who has had viral video success on the internet with his film Ski Jumping Pairs (2002) and this year’s Oscar winner Kunio Kato whose film Around appeared on the program.

Digista Vol. VII represents the best of last year’s Digista shorts. Hiroko Namba was very interested in collecting feedback from the audience that she could take back to the animators. This included polling the audience about their favourites. I learned from her after the screenings that the curators had selected a ‘best of the best’ for a special prize. The winner was Masanori Okamoto (岡本 将徳) for his film Mending a Puncture (パンク直し).

Mending a Puncture is a very interesting film for its turning of a mundane event, the repair of a bicycle tire, into something extraordinary. Apparently he spent a month observing workers in a bicycle repair shop so that he could get the detail just right. The result is a technically brilliant animation.

My personal favourite film was Taijin Takeuchi (竹内 泰人)’s The Wolf Loves Pork (オオカミはブタを食べようと思った). It is a very complicated stop motion animation that involved animated photographs inside a room. The photos feature a boy in a wolf costume and a model of a pig. The photos themselves depict a scene shot outside, but the photos themselves occupy and interior location (an average apartment). As the photos multiply, a scenario is animated in which the wolf boy chasing the pig. Takeuchi has done a remarkable job in matching exterior shots to the interior shots. For example, the pig is shown in the photos to be escaping down a flight of stairs, while in the interior space he is descending from the table to the floor (see image above) . Another great match is when the photographs reach the kitchen sink. The wolf boy in the photos swims across a pool, while the ‘photo’ of him floats across the water in the sink. It really is a film that defies description and must be seen to be believed. An exceptionally creative animation.

Another animator who impressed me with his innovation was Sho Yamaguchi (山口 翔) whose film Trip takes us on the self-reflexive journey on an artist whose sketches transform from line drawings into 3D-CG figures around the city. The film cleverly combines elements of cel animation, pixilation and computer animation with a great storyline to boot. The most memorable for me was the 3D-CG whale floating over the city street.

I am going to have to watch Shuichi Nishikoji (西小路 修一)’s film Sho-chan’s Summer (しょーちゃんの夏休み) again, because I was distracted by it’s lack of a soundtrack and did not fully appreciate the film. Hiroko Namba informed me that this was artist’s intention, but as there are often technical snafus at Nippon Connection I didn’t realise this until the film ended. Namba also told me that Nishikoji made this, his first animation, at the age of 65. He has had a career as an illustrator, which would explain the high quality of the cel animation.

All of these films and more are available for viewing on the NHK's website here, so check them out!